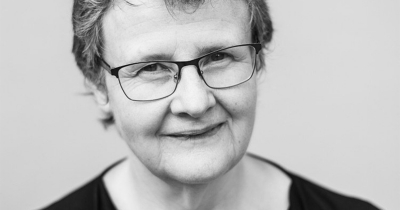 In my tiny inner-suburban backyard garden, mooching around with compost and growing things. At dinner with my family. Or with my feet up and a good book in my favourite chair in the living room.

Childhood sporting humiliations have left me with a dread of being in places where somebody might throw a ball towards me and expect me to do something with it. Other than that, venues where the noise is too loud for good conversation.

Self-effacement – when it is a cover for cowardice.

Impossible to choose; it depends on my mood and what I’m doing at the time. During times of stress I return to Jane Austen. The Great Gatsby is the most perfect handling of structure and theme. Joan Didion’s collections of journalism and essays – particularly After Henry – have inspired me and shown me it is possible to do journalism differently. Anything by Toni Morrison. I could go on …

Vita Sackville-West (we would discuss gardening), Margaret Atwood, Walt Whitman (though he might disappoint). Can I have a fourth? William Shakespeare.

Dislikes: ‘upcoming’ and ‘impactful’ and ‘stakeholder’. Back in common usage – not a term but a phrase to describe an important function of journalism ‘journal of record’.

He was a difficult and misogynistic old bastard, but nobody does sentences like Hemingway. For wit and structure – Austen. For meritorious courage in observation – Didion.

I can’t think of a single one. Shakespeare’s Henry V through the three plays in which he is depicted. Such character progression! Elizabeth Bennet, of course – ditto. George Milton in Steinbeck’s Of Mice and Men.

My mother used to quote Shakespeare as part of everyday life. His wit and language were part of my landscape long before I was old enough to read him for myself. My mother’s other great love was Alexander Pope. I think these things influenced me almost without my noticing while I was busy reading the Narnia books and Biggles.

I don’t think of it.

Yes, but not immediately.

Yes, but not always in obvious ways.

A Quarterly Essay about the Murray-Darling Basin, and a recent history of the Australian Broadcasting Corporation – as well as a lot of jobbing journalism.

Margaret Simons is a freelance journalist and author. Her new book, Penny Wong: Passion and principle (2019), is reviewed by Angela Woollacott. She is an Associate Professor in the School of Media, Film and Journalism at Monash University.