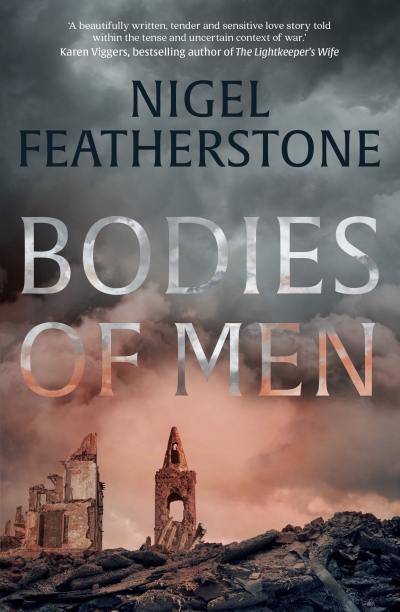 From its raw and revelatory prologue, Nigel Featherstone’s novel Bodies of Men offers a thoroughly humanising depiction of Australians during World War II. In telling the story of two soldiers, William – too young to be a corporal – and his childhood friend James, Featherstone reflects upon the brutality, drudgery, and absurdity of war but also on the two men’s love and regard for each other: ‘The private smiles and William allows himself to smile too. Something passes between them: a wish, or an echo, or something beyond a soldier’s imagination.’

Early in the story, William and James engage the enemy, a few Italians scrabbling about in the desert west of the Nile. The scene is a stark glimpse of men fighting men, of William seeking to assert and prove himself, of James’s calmness, and of the reality of death in wartime.

Soon after, William’s superior officer, Captain Bradley Allen, sends William and a small group of men into the desert. There, they sit and wait, practising endless manoeuvres, perhaps to ready them for battle, perhaps to stave off boredom. James, meanwhile, has a motorcycle accident. He winds up badly injured and AWOL in the house of two strangers, Yetta and Ernst, in Alexandria. While grappling with their own wartime worries and secrets, the couple tend to James as he slowly recovers. When William, on leave from the desert, finds James, their childhood bond is renewed and strengthened by their mutual attraction and, soon, their mutual devotion.