No Front Line: Australia’s special forces at war in Afghanistan by Chris Masters

Few organisations defend their reputation more vigorously than the Australian Defence Force (ADF). Long since clasped to the national bosom, the ADF has no intention of being shoehorned out of its prized position at the heart of Australian identity and culture. The first duty of its public affairs personnel is to protect the brand – a brand, it believes, is fragile and under constant assault. In reality, the ADF’s reputation is virtually unbreakable. At one point during 2011 there were six separate investigations running simultaneously into various aspects of ADF culture, including inquiries into personal conduct within the ADF, the use of alcohol, the treatment of women at the Australian Defence Force Academy (ADFA) and in the ADF more broadly. Sparked by the ADFA Skype Sex Scandal, the investigations laid bare a toxic culture of misogyny, bullying, and abuse. What damage did this scarifying experience inflict on the ADF’s standing in the eyes of the public? In February 2012, while new allegations of abuse were still surfacing, Essential Research asked its polling sample ‘How much trust do you have in the following national institutions?’ The ADF came in top, well ahead of the Federal Police, the Federal and High Courts, ASIO, the Reserve Bank, and the Commonwealth Public Service.

The ADF’s conviction that it is under assault, particularly from the national media, has deep and dubious roots that stretch far back into the nation’s military history. In almost every conflict involving Australian forces, from the Boer War to the present day, the national media’s presence on the battlefield has been sporadic, contentious, and generally unhappy. Tim Bowden notes that in Vietnam the Australian Army treated the media to what a British colleague called the ‘feel-free-to-fuck-off’ approach to public relations. But you can’t fuck off unless you’re there in the first place. Throughout both Gulf Wars the ADF, ably abetted by the Department of Defence and the governments of the day, did their utmost to ensure that the media never got near the battlefield.

This policy of censorship by exclusion reached its apogee in Afghanistan. The nation’s longest war was arguably its worst reported. While British, US, Canadian, and Dutch journalists embedded with their respective – and sometimes their allies’ – militaries, keeping their publics informed about what their troops were doing in their name, Australian reporters cooled their heels at home. A fortunate few were allocated spots on ‘bus tours’ to the Australian base at Tarin Kowt. Directed to record the latest developments at the Trade Training School, where young Afghans wrestled with trowels and screwdrivers, or the refurbishment of Tarin Kowt Hospital, they were forbidden to travel beyond the wire where the real story was unfolding. Australia finally trialled an embedding program in 2009, and only established a functioning system of media rotation in 2011–12, just in time for the beginning of the end of the deployment. In the light of this, is it any wonder that Australians grew increasingly detached from a conflict they scarcely saw and barely understood?

It is ironic that the first, truly comprehensive history of the ADF’s engagement in Afghanistan should emerge from the one perspective perennially regarded as off limits to media scrutiny – Special Forces (SF). It is like getting a first history of the Ottoman Sultans from inside the harem. Chris Masters enjoyed unprecedented access to personnel and to the records of their missions over more than twelve years of operations. Steeped in the language and culture of these modern-day action men, he begins the book with an important disclaimer: ‘While I liked them I never wanted to be them. Rather, I wanted to tell their story.’ And what a story it is.

Perhaps the book’s biggest revelation is the tempo and intensity of the operations that it describes. Over twenty force rotations between 2001 and 2013, Special Air Services Regiment (SASR) troopers and Commandos were involved in hundreds of troops in contact incidents – tumbling out of helicopters into deadly firefights, raiding compounds, responding to IED strikes, laying ambushes, and engaging with the enemy at close quarters. The level of fire, both incoming and outgoing, in the greater number of these contacts was extreme and that Special Forces casualties remained so low – only twenty-one out of the Australian total of forty-two – is testament to their selection, training, professionalism, and luck. But not everybody was so lucky. Masters’ descriptions of the specific circumstances in which men died – crushed beneath a crashing helicopter, disintegrated by an IED, blown out of a vehicle by a roadside bomb, shot in the head – provide a sobering corrective to the euphemistic cant about ‘supreme sacrifice’ that was increasingly on the lips of the senior ranks and the politicians as losses mounted. 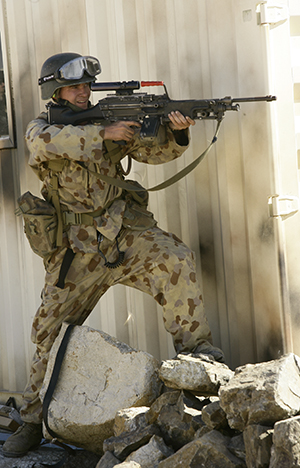 An Australian Defence Force (ADF) soldier at a training facility (photograph by Lance Cpl Michael Augusto, Wikimedia Commons)The intensity of incoming fire that inflicted so much damage reveals a resilient, and surprisingly admirable foe. The enemy who emerges from these pages showed commitment, guts, and battlefield nous. Unprotected from the air, under-equipped, and often under-gunned, sometimes they hit and ran, escaping to fight another day, but on many occasions they stuck to their guns and willingly chose death. Though we rarely meet them, they are both a powerful presence and a stern reminder of how unforgiving and unknowable Afghanistan remained to most of the coalition forces who passed through there and the publics they served.

The book’s account of relations between the SASR and the Commandos offers an implicit riposte to the reflex narrative of universal mateship that lies at the heart of our military myths. Relations between the SASR and the Commandos were poisonous. Mostly afforded separate tasks in the field, they billeted, ate, and socialised separately back in camp. Endlessly squabbling over access to limited helicopter capacity and the missions assigned to the other, the Commandos disdained what they saw as the SASR’s arrogance and trigger-happy carelessness, while the SASR regarded the direct entry Commando force as ‘direct entry cunts’, insufficiently trained and not up to the job. Enmity ran deep. After a solemn ramp ceremony for three Commandos killed in a helicopter accident in June 2010, key members of the SASR audibly denigrated the Commandos. Brilliant and brave, these men could also be petty, puerile, and morally misguided – disturbingly human, in fact.

If this was the truth that the ADF was so desperate to keep from the Australian media, it has done itself and the public a massive disservice. Masters’ book details, at extended length, the extraordinary stories that we never heard because the ADF was too petrified to tell them. This was public affairs gold – yet the fools mistook it for base metal. Convinced that ‘they’ve all got it in for me’, the ADF’s obsession with reputation management has silenced the authentic voice of its people at war for too long. I would like to think that Chris Masters’ marvellous book marks the beginning of a new openness from the ADF, but I’m not betting on it. 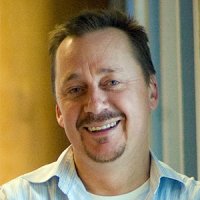 Kevin Foster is Head of the School of Languages, Literatures, Cultures and Linguistics at Monash University. He has published widely on the representation of war, military–media relations, the cultural history of the military, national identity, and combat photography. He is the author of a number of books, including Don’t Mention the War: The Australian Defence Force, the media and the Afghan Conflict (2013) and most recently, Anti-Social Media: Conventional militaries in the digital battlespace, which was published in 2021 by Melbourne University Press. 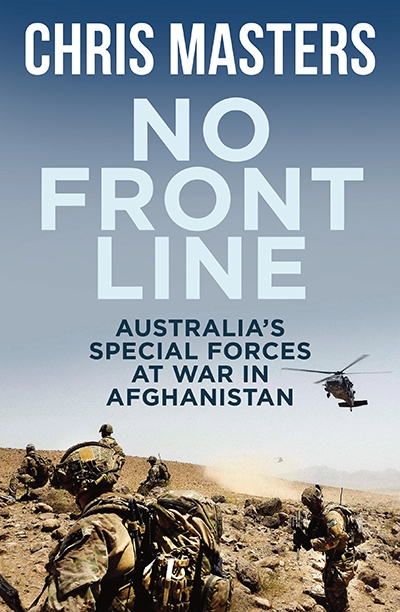 No Front Line: Australia’s special forces at war in Afghanistan