Believe in Me by Lucy Neave

Halfway through Lucy Neave’s new novel Believe in Me, there is an astonishing scene in which an orphaned foal is dressed in the skin of a newly dead foal, the skewbald coat threaded with baling twine and the strings knotted under the throat and chest. Disguised in this fleshy coat, strands of bloody muscle still clinging to it, the foal is presented hopefully to its foster mother. The novel’s main protagonist, Bet, is sceptical: ‘It’s condescending: as if a mare could be fooled by putting her dead foal’s skin on another foal.’ Sure enough, the grieving mare rejects the starving foal, stamping her hooves and moving around uneasily in the stable. Later that night, when Bet goes to check on the animals, she finds them nestled together: ‘Dark shapes, they moved together, away from me, as though they’d been startled from a dream.’ Stunned at this unexpected communion, Bet retreats into her own solitude: ‘I turned off the light, bolted the door and walked back through dew-soaked grass to bed, seeing again the mare and foal, nose to tail. They had no need of me.’

It is what the characters in Believe in Me are yearning for: this shedding of skins and the triumphant rebirth of an authentic self; this dazzling surprise of unexpected, unconditional love. But this kind of loving bond only seems to be available to the animals in the novel; the human characters are left striving for connections that continually elude them, for a kind of self-actualisation that seems forever out of their reach. They are all shadowed by ghosts and disfigured by scars – unable to feel themselves whole, unable to love wholly.

The narrative follows Bet as she attempts to piece together her mother Sarah’s story as a way of understanding and accepting her complexities and of making sense of Sarah’s frequent distances and failings as a mother. ‘If I can inhabit her consciousness, even a little, it might help me see who I am,’ Bet tells us. ‘Imagine that I’m creating a reversible figure; within a silhouette of a candlestick, for example, there lies hidden the profiles of two lovers. Sarah is the candlestick.’

The first part of the novel follows the young Sarah on a journey accompanying an evangelical preacher from her home in upstate New York to small-town Idaho, through to her pregnancy and disgraced exile to a home for unmarried mothers in Australia and her dramatic efforts to keep her baby and forge a life for herself in a strange country.

In a literary landscape where so much contemporary fiction is merely competent and corrigible – what Nabokov called ‘weak blond prose’ – Neave’s authoritative and idiosyncratic style is a refreshing surprise. The language is powerful and richly allusive, full of visions of the horseman of the apocalypse, dreams of drowning children and lightless water, lake air and darkening skies. The characters read Leviticus, snow falls, the grass freezes, signs and omens are everywhere. In this first section, Believe in Me has the radical strangeness of a Marilynne Robinson novel; the narrative carries the reader along with the dramatic thrill of a wild biblical tale.

The raw, visceral experiences of the first half of the novel give way to a more restrained accumulative realism as the twin narratives of Bet and Sarah’s lives in Australia are unspooled, and the novel follows the women through various loves, losses, upheavals, and reckonings as they try to find some semblance of contentment, across several decades and moving from place to place. After the pleasures of the first section of the novel, one cannot help feeling that the engine of this second part idles too slowly. Despite this, Believe in Me is a skilfully rendered and richly layered narrative about the complex bonds that unite mothers and daughters and the fractures that cleave them asunder.

There is an occasional difficulty with perspective. The novel is ostensibly Bet’s attempt to make sense of her mother’s life with the aid of the scrapbooks that Sarah has left behind, and naturally the account is partial, with Bet telling us on the first page of the novel; ‘I traverse a tightrope high above the ground and have to fill in the empty air beneath so that I can move from one known place and time to another.’ Any reconstruction of a life is by necessity part invention, but the problem in Believe in Me is that sometimes the narrative swerves intimately close to Sarah’s perspective, while at other times Bet is unable to access her mother’s thoughts and feelings. She makes observations like: ‘Sitting up high, Sarah feels the space grow around her, as if she has room to expand’, while a few pages later Bet says: ‘I can’t tell what thoughts are ricocheting around Sarah’s head.’ This leaves the reader with a faint uneasiness regarding the source of Bet’s story; the novel is either an imaginative inhabiting of a mysterious life, or it is a partial retelling bound by its gaps and absences. It’s somewhat confusing for the reader when Bet appears to inhabit both poles. Perhaps in the end, Neave is trying to teach us something about the essential unknowability of another person – that all we can ever intuit is circumscribed, and the wordless communion we crave is only possible for the animals. 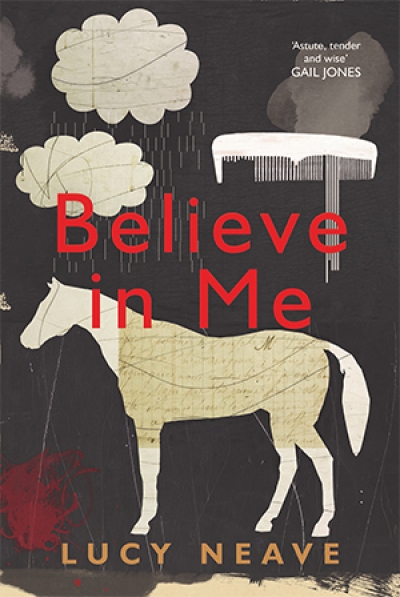