Along Heroic Lines by Christopher Ricks

The first essay in Christopher Ricks’s Along Heroic Lines is the text of his inaugural lecture as Professor of Poetry at Oxford, an honorary post he held from 2004 to 2009. He takes as his subject the formal distinction between poetry and prose. If one is going to be a professor of poetry, the least one can do is arrive at a satisfactory definition of one’s object of study. To this end, Ricks summons to the witness stand an august procession of English poets and critics – Samuel Johnson, Samuel Taylor Coleridge, Matthew Arnold, Alfred Tennyson, W.H. Auden, A.C. Bradley – and considers their authoritative pronouncements on the matter, only to arrive at the inconvenient conclusion that a strict line of demarcation is difficult to sustain.

There is something a little impish about using the occasion of his acceptance of such a prestigious post to chip away at the idea that poetry can or should be regarded as inherently superior to other modes of literary expression. Ricks’s aim is certainly not to denigrate the artistry of the poet (no one could accuse him of that), but rather to place the prose writer on a more equal footing. He notes that the finest prose can be every bit as memorable, euphonious, rhythmically precise, and rich in implication as a successful poem. And he makes a point of extending his defence of the prose writer to his own genre: the least glamorous, least loved, least likely to be considered ‘creative’, and most misunderstood genre of them all: literary criticism. ‘What I’d like to know,’ he writes with wry indignation, ‘is why, since Tennyson and I work in the same medium – language, in a word – why it’s always me giving a talk about him and never him giving a talk about me.’

Ricks is one of the world’s leading T.S. Eliot scholars and an old-school close reader. His critical practice is a version of what Eliot called ‘lemon-squeezer’ criticism, which seeks to ‘extract, squeeze, tease, press every drop of meaning’. The essays in Along Heroic Lines are full of finical dissections of phrases and lines of verse. The etymologies of individual words are consulted, buried allusions and connotations are excavated, and multiple shades of meaning are thereby revealed. Even offhand or parenthetical observations and seemingly innocuous linguistic stopgaps do not escape Ricks’s attention, recognising as he does the vulnerabilities that are exposed in those moments when authors feel the need to signal their confidence (‘surely’, ‘of course’) or their uncertainty (‘perhaps’, ‘maybe’).

As a critical method, this exacting approach has some notable virtues. At its best, it is a way of engaging with a piece of writing on its own terms, acknowledging that its technical intricacies generate the aesthetic experience that is an intrinsic part of its meaning. It is a way of honouring the fact that much of the interest and, indeed, the evident delight that Ricks takes in literature is a function of its specificity, its ability to generate that flash of insight, make unexpected connections, skew one’s perspective so that reality appears in a new light.

The flipside of this approach is the wood-for-trees problem. There are invariably multiple levels on which any art work is meaningful. Yes, it can be fascinating to examine the surface of a pointillist painting with a magnifying glass, but at some point it is advisable to step back and take in the whole image. Ricks, perhaps, does not really want an answer to his Tennyson question, but at least part of that answer must be that a studious, thirty-page discussion of Dryden’s use of the heroic triplet (to take but one example) is what is known these days as ‘niche content’. One of the chief problems any critic faces is how to make the analysis that is an essential part of his task live and breathe as an independent piece of writing, how to avoid becoming the tedious person who insists on explaining in minute detail things that are meant be experienced directly. In a manifesto-like passage in which he defines criticism as ‘the art of noticing things that the rest of us may well not have noticed’, Ricks points out that this imperative requires a certain tact, since the critic ‘must neither state nor neglect the obvious. Whether something is obvious may not be obvious.’

Ricks negotiates this problem in Along Heroic Lines with varying degrees of success. He is an excellent noticer who likes nothing more than diving into the innumerable rabbit holes literature presents. The pleasure he takes in the wit of his subjects – a motley assortment that includes Eliot, Byron, Henry James, Samuel Beckett, and Norman Mailer – is reflected in his prose, which is enlivened by his own wordplay and a donnish sense of humour. W.B. Yeats, he notes in a distinctly Johnsonian vein, was ‘particularly anxious … to give credit where credit is due, namely to himself’. An essay on anagrams provides an occasion to observe that ‘Tony Blair MP’ can be rearranged into ‘I’m Tory Plan B’. Elsewhere, Ricks is tickled to recall the obituary of an obscure man of letters, who ‘had several wives, some of them his own’.

For all his playfulness and erudition, Ricks can be an indifferent essayist. When it comes to critical essays, in particular, the devil is not necessarily in the details or the quality of the prose, as such, but in structure and flow. The essays in Along Heroic Lines are full of interesting observations, but they are not light on their feet. They tend to be organised around a theme, rather than pursuing a clear line of argument. They proceed associatively, tracing links and sometimes obscure references, catching literary echoes across centuries. Their details accrue rather than cohere. As a result, they combine an academic fastidiousness with a sprawling quality that makes it hard to imagine anyone who lacks the requisite specialist interest reading them for amusement. There are only so many lemons one can squeeze before one starts to feel the need for a stiff gin and tonic.

To some extent, this is a consequence of the fact that Along Heroic Lines is an odds-and-sods collection of previously published articles, rounded out with only a few new essays. That it is a loose assemblage is suggested by its notional unifying theme, indicated by the title. The ‘heroic line’ was the term favoured by Johnson for the iambic pentameter, which, of course, has an importance in English poetry akin to the dactylic hexameter in ancient Greek and the alexandrine in French. Ricks follows Johnson in preferring the term because it has a less technical air that admits the natural flexibility of the language. Throughout these essays, he makes a point of noticing the recurrence of the heroic line in supposedly unpoetic contexts (Mailer’s jiving prose, the letters of Eliot and Johnson), arguing that ‘it is crucial not to suppose that poetry is a matter of rhythm but prose is not’. The open-ended commitment of the literary critic, in other words, is to the subtle music of language itself, irrespective of genre. The critic’s scholarly and technical knowledge is ultimately a form of aesthetic appreciation, which holds out the possibility of a wider understanding. ‘Criticism,’ Ricks argues, ‘is not a service industry but a service art, one that begins with the asking of crucial questions, a necessary (not a sufficient) condition of seizing crucial answers.’ 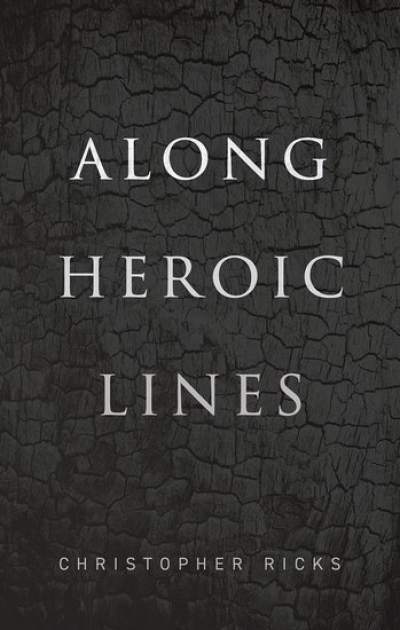