Doom: The politics of catastrophe by Niall Ferguson

One of the disconcerting aspects of this pandemic is that there was no shortage of warnings. For decades, virologists foresaw the coincidence of urbanisation, human proximity with animals, climate change, and globalisation as ideal conditions for spreading deadly pathogens. Science journalists wrote books with titles such as The Coming Plague (Laurie Garrett) and Spillover (David Quammen), whose conclusions were amplified by TED-talking billionaires. SARS, MERS, Ebola, and swine flu were further clues. Yet come January 2020, authorities worldwide were slow, indecisive, and ill-prepared.

In this sense, Covid-19 has the makings of a classical tragedy: not mere misfortune but a sequence of unheeded prophecies, unknowing collusion with calamity and disorientation when required to act. Niall Ferguson’s Doom and Michael Lewis’s The Premonition – two chronicles of the pandemic likely to dominate bestseller lists for some time – deal with such tragedy in spades. But Ferguson, among the world’s most visible and contentious historians, and Lewis, an unrivalled raconteur of Hollywood-ready financial, sporting, and political intrigue (Moneyball, The Big Short), also deliver well-established tropes and takeaways. Tragedy is neither author’s default genre, which leaves the makings of the pandemic only partially explained.

Doom is offered as a ‘general history of catastrophe’ that situates ‘our disaster’ in ‘proper perspective’. The book achieves both more and less than this. Beginning his career as a financial historian, Ferguson has amassed much attention writing sweeping venerations of British imperialism, Western civilisation, and the American empire. His last book, The Tower and the Square (2017), was an eclectic take on how networks shape human civilisations. Doom widens the canvas to a size both awesome and mind-boggling.

For Ferguson, disasters are often tragedies, prophesied by Cassandras who can neither persuade a sceptical chorus nor save the king from doom. The problem is that humans are bad at comprehending catastrophe. We rebuild cities where an earthquake strikes, as short-termism and forgetfulness blind us to how disaster-prone the world really is. Moreover, he adds, humans obsess over the wrong kind of destruction. Millennialist doomsayers, including today’s ‘prophets of catastrophic climate change’ and cyclical theorists of boom and bust, detract from what makes disasters disastrous: they are unpredictable, complex, and involve mass ‘excess death’, not total obliteration.

Uncertainty and complexity are the recurring themes that make this history ‘general’. Ferguson gallivants from volcano eruptions in ancient Rome, earthquakes in the Wei River Valley and Lisbon, the Black Death and Spanish Flu, famines in Bengal, Ireland, and Russia, the Somme, and, finally, to Covid-19 to make his case. It goes something like this: disasters follow a random statistical distribution but are more frequent than is usually appreciated. The extent of catastrophe is determined by human-made networks that transmit, and then are destroyed by, disaster. As such, even natural disasters are ‘man-made’. Networked catastrophes limit the capacity of modern science to mitigate disasters, but also the blame attributable to any one individual. Finally, there is a ‘fractal geometry of disaster’, whereby smaller mishaps – Titanic, Challenger, Chernobyl – magnify the properties of larger ones, so failures by ‘middle management’ are generally most significant.

This final observation provides Ferguson with his explanation of Covid-19. While networks of air travel and nursing homes spread the virus, and populist leaders blundered, it was incompetent public health bureaucracies that turned risk into calamity.

Doom is broad-brushed, empirically formidable, discipline-defying, and not wholly convincing. The ‘politics’ of catastrophe promised in the subtitle is thinly elaborated, and there are no criteria to distinguish the ‘colossal’ catastrophes that interest Ferguson (why great wars but not colonialism and slavery?). Authored in secluded Montana after Ferguson spent early 2020 jetsetting (and potentially ‘superspreading’), Doom often reads like a series of Boy’s Own-inspired whims threaded together with his favourite themes, written to satisfy his ‘intense preoccupation’ with the pandemic.

That said, it makes for wonderful reading. The scope is breathtaking, as is the handling of the latest in cliodynamics, network theory, and epidemiology. If Ferguson’s aim is to place Covid-19 in the epic panorama of pandemic-like human devastation, Doom is a success. Yet, as is characteristic of Ferguson’s grand, cocksure narratives, there is an agenda. While the author’s downplaying of climate change is maddeningly simplistic, Doom presses for a different perspective on the next unpredictable disaster. In the final pages, Ferguson himself morphs into a Cassandra, suggesting that the pandemic’s biggest fallout will be geopolitical crisis, perhaps of nuclear proportions. While the hapless bureaucratic response to Covid-19 might further illustrate American decline (a topic that has long interested Ferguson), Doom argues the pandemic has weakened both the United States and China, further entrenching their ‘Cold War’, which, Ferguson hopes, will jolt US complacency. Echoing his conclusions from Colossus (2002), Civilisation (2011), and The Great Degeneration (2012), Ferguson envisages the United States resurging as the empire the world still needs, swatting Chinese communists to one side and threats of a surveillance totalitarianism to the other. This is all serious stuff, again prosecuted with a bit too much enthusiasm.

Michael Lewis is not so bombastic. But he does like Cassandras. Where The Big Short spotlighted investors who identified the subprime implosion and made fortunes when no one listened, The Premonition tells of the public-health officials who warned of the pandemic but were ignored by authorities.

In his previous book, The Fifth Risk (2018), Lewis also posed as a Cassandra. That book depicted the vast US bureaucracy as managing the world’s biggest risk portfolio, which is constantly placed under strain as every new White House administration makes presidential appointees replacing the top posts across government. With Donald Trump caring little for that process, Lewis dreaded a meltdown. While Covid-19 was not the disaster Lewis expected, The Premonition is a sequel to The Fifth Risk’s exploration of the consequences of politicising public administration.

The book follows a small cast of experts who, in the early 2000s, rediscovered the efficacy of social distancing in halting the spread of pathogens, before foreseeing Covid-19 hitting the United States and developing testing and genome sequence technologies to beat it. At every turn they are thwarted by public-health authorities and the ‘medical-industrial complex’.

Lewis’s trick in conveying the dramas of contemporary America is finding remarkable characters that personify a moment in unique ways. The star here is Charity Dean, the decisive, razor-sharp public-health official from Santa Barbara who rises from obscurity to advise the Californian governor and White House officials. Dean also bucks Lewis’s penchant for telling stories about hyper-smart, masculinist Masters of the Universe – Tom Wolfe being Lewis’s literary hero.

Yet the institutional villains are the real story, particularly the guarded and cautious Centers for Disease Control and Prevention (CDC). The once-admired and still-prestigious CDC provides guidance to the US network of local health officials. But in early 2020, discarding advice from Dean and others, the CDC downplayed the threat of the virus, prohibited testing passengers returning from Wuhan, and, once the crisis was upon them, distributed faulty testing kits. Dean was baffled: ‘Why doesn’t the US have the institutions to save itself?’

Unlike Ferguson, who also faults the CDC, Lewis ventures at the end of The Premonition to answer this question. The tale is revelatory. During a novel influenza scare in 1976, the CDC, appreciating the tragedy of having to act, recommended a massive vaccine rollout. But the virus never took off and the vaccine killed fifty people. Old hands say this was when the CDC became more cautious and more closely monitored by the White House. The CDC directorship was converted from a merit-based civil servant to a White House-pleasing presidential appointee. Political expediency replaced civic bravery.

Lewis does not explain that, in the 1980s, Congress also legislated for the CDC to receive private funding, aligning public health with drug companies’ interests. Across the board, budgeting was privileged over expertise and governmental capacity translated into market efficiency. However, these details are not the kind of stories Lewis tells. The Premonition ends with Charity Dean moving from public health into medical consultancy to better leverage the health system. Lewis treats this positively: the United States has the talent, properly utilised, to beat pandemics. Lewis’s heroes are inevitably romantic, not tragic: weary and depleted from American crises, but ultimately vindicated if not stronger.

Meanwhile, one suspects that Niall Ferguson, with his fixation on US decline and heroic revival in the face of Thucydidean danger, is less a Cassandra than a loud voice in a dangerously hawkish chorus. 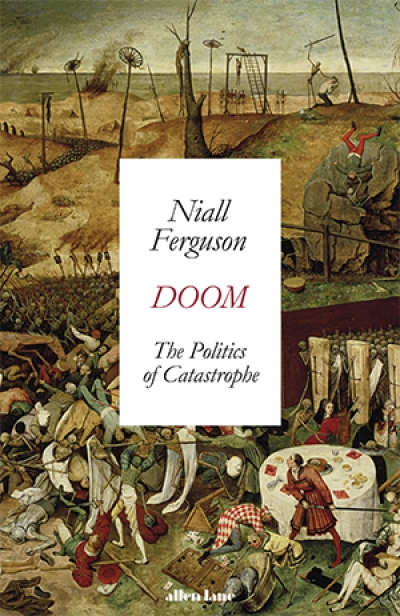 Doom: The politics of catastrophe