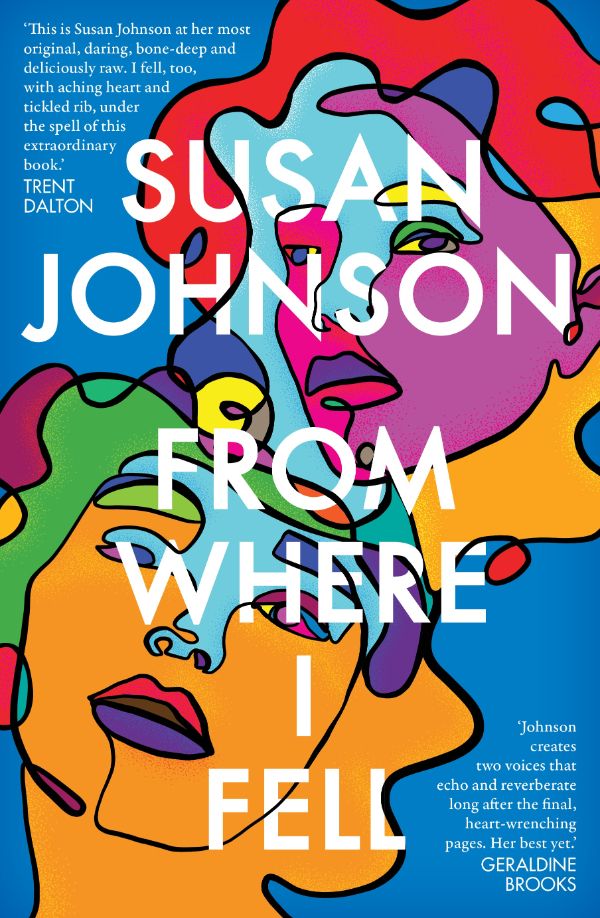 From Where I Fell by Susan Johnson

A new Susan Johnson novel is always a treat, partly because you get the sense that with each one she has set herself a specific creative challenge, and partly because she is such a fine writer. In From Where I Fell, the epistolary novel, popular in the nineteenth century, has been updated, with the entire work in the form of emails. Nothing new in that, but what makes this different is that the contemporary problem of emailing someone unintentionally is followed through with that intellectually teasing ‘what if’ thread: what if the person you accidentally contacted was someone with whom you wanted to keep communicating? What if this person was someone to whom you could confess your most private thoughts? And what if this person never responded in a conventional manner?

This is what happens when Pamela, a Sydney-based librarian and mother of three sons (including a seriously disaffected teenager), sends a heartfelt email to a woman called Chris in the United States instead of to her ex-husband Chris in France. The former replies, and while her first email is reticent, Pamela responds by oversharing her very middle-class woes: being a single mother in suburban Ashfield, how hard it is to juggle work and motherhood, how she regrets leaving her husband. She spills her guts in long, impassioned emails that always end in protestations of love for the correspondent she has never met and, we imagine, never will.

Chris’s emails, on the other hand, reveal a feisty, unpredictable, and inscrutable personality. They are terse and private, ending with the sign-off ‘take care’, something Pamela should perhaps heed more than she does. Chris, though something of a battler, has time to help others without advertising the fact. And as she bluntly tells Pamela, ‘I don’t want to be rude, but you do enough reflection for the whole of Australia. There is a fine line between reflection and self-indulgence.’

This novel relies on voice and character more than on storyline or plot. But while Pamela is an annoying character, the cleverness of Johnson’s art is that she is also familiar. Not only might she be that person whingeing over the coffee machine at work, trying to juggle too much, overcompensating for her children’s lack of a father, not content to have a home and a job and three gorgeous children when so many do not – she might even be us. 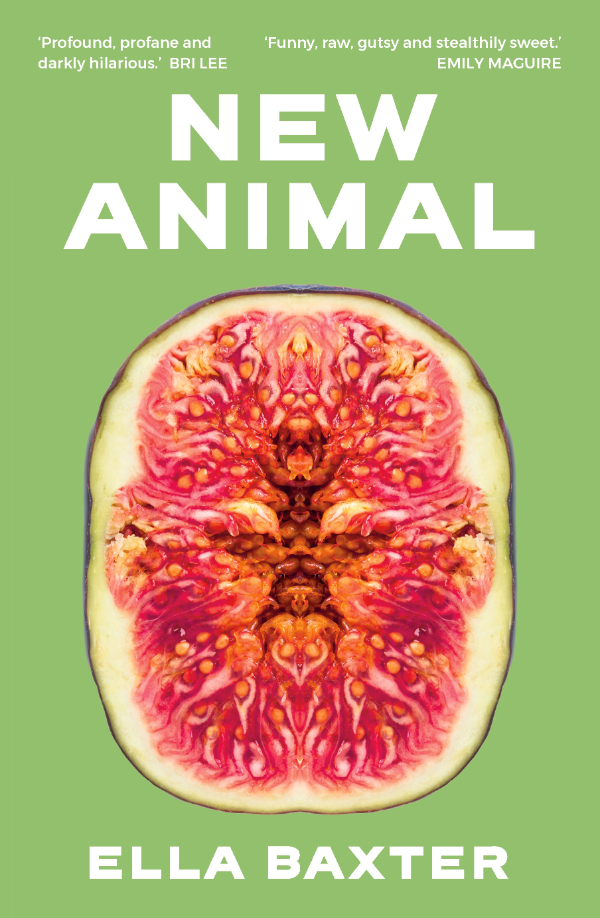 Plot is a minor consideration in Ella Baxter’s novel New Animal, which is more a series of arbitrary events propelling things towards an end point. It works by premise, though it is a good one: Amelia is a cosmetic mortician, working in the funeral home run by her stepfather, who, years ago, had seduced Amelia’s mother with offers of work in the family business. We get that: death can be surprisingly sexy. But when her beloved mother dies in an accident, this seems more like a device to kickstart Amelia into action, rather than being integral to the story. This one event is a hook on which to hang all that follows, starting with Amelia’s inexplicable and sudden decision to avoid the funeral, travel interstate, and reconnect with her biological father. She spends little time with him, instead adopting a BDSM lifestyle overnight, which initiates a series of incidents that are chaotic, implausible, gross, and sometimes hilarious.

New Animal is messy, unfocused, and laced with surprises. Despite having handled death with professional detachment, Amelia realises that she knows nothing about grief, and that bodies, whether live or dead, cannot always be controlled. The final chapter about the last body she prepares for burial knocks us sideways with unexpected tenderness. 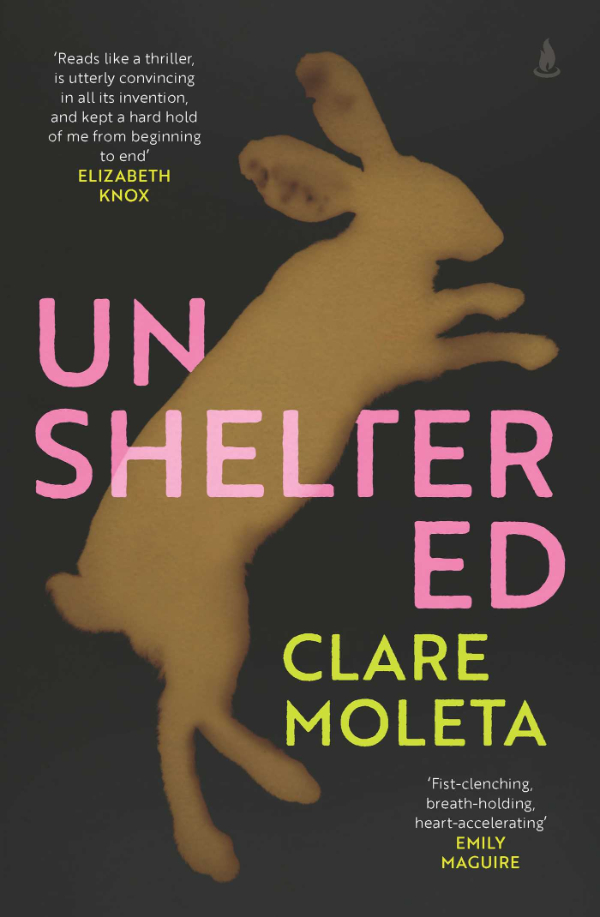 With Clare Moleta’s Unsheltered we move into different territory altogether. As a novel this is impressive enough; as a début it is outstanding. One of those novels that takes you by the scruff of your neck and drops you straight in, Unsheltered is set in a future version of a place like Australia. Its main theme is degradation on a vast scale: environmental, of course, as well as social, political, and economic.

The story focuses on Li, whose young daughter Matti has gone missing while Li was out hunting food to sustain them in a temporary refugee camp. Having been victims of climate disasters, and having sought asylum in another state, they have already lost their husband and father, Frank, and are now illegal, or officially ‘unsheltered’, in their own country.

Everything in this harsh world is transactional – people don’t get so much as a glass of water unless they offer something in return – and so while Li is cautious and resourceful, her journey to find Matti becomes a series of fights against dangers that are both anticipated and unexpected. She only just survives a fire, then sprains her ankle escaping attackers in the night, camps in a broken-down vehicle after ejecting the desiccated corpse of its driver. She is double-crossed when out stealing water, and incarcerated in a massive prison camp where a deadly flu is raging.

It is fascinating how much currency this novel has: anxiety about water supply, dispossession, border security, and other contemporary issues, such as public health, affect every individual in a world where merely existing is a daily battle. It is extraordinarily relevant, in a profound and sometimes touching way, without the constant disasters seeming gratuitous or overdone. The unsheltered of the title – dispossessed only because of bad luck and brutal policies – have no status and are subject to constant surveillance. In fighting for her basic human rights, not to mention what she holds dear, Li could be anyone from our society: a worker ejected from JobKeeper, a victim of domestic violence, or someone exhausting their phone credit while on hold to Centrelink.

While it may be hard to get a handle on the geographic and political complexities of this world, it is impossible not to feel it, to understand it. Checkpoints, ‘makecamps’, regions called the No Go, the Sacrifice zone, all suggest landscapes long destroyed by mismanagement, vast penal states, and implacable authoritarianism. An entity called the Company controls everything and provides nothing. A service called Homegrown offers relief or aid that is only provisional. The ubiquitous XB Force polices everyone.

Other ironies abound: communications are intricate yet mobile phones are rare; shipping containers are both shelters and incubators of disease; water is a scarce commodity and ‘howlers’ or dust storms prevail, yet a massive deluge only brings destruction. Having embarked on a perilous journey to find Matti, Li is soon part of an epic endeavour, along with other desperate people, few of who can risk true friendship.

I won’t spoil the suspense of this remarkable novel, but all throughout we wonder what has happened to Frank, who the mysterious Chris is that Li keeps phoning whenever she can, and why she was a reluctant parent. Moleta reveals the answers to these questions at perfectly timed dramatic moments, but leaves enough unsaid for our imaginations to keep sparking for a long time afterwards.

The world of this novel is only disorienting at first glance. The degradation of the environment, surveillance by the state or communications companies – not to mention the commodification of our most precious natural resource – are all too familiar. Unsheltered sounds grim and depressing, but Li’s ferocious devotion to finding her daughter provides a strangely optimistic thread that relieves the shocking violence. You will grip this thread until your palms bleed.

Debra Adelaide has published eighteen books, including novels, short fiction, and essays, the most recent of which is The Innocent Reader (2019). Until 2020 she was an associate professor in the creative writing program at the University of Technology Sydney.