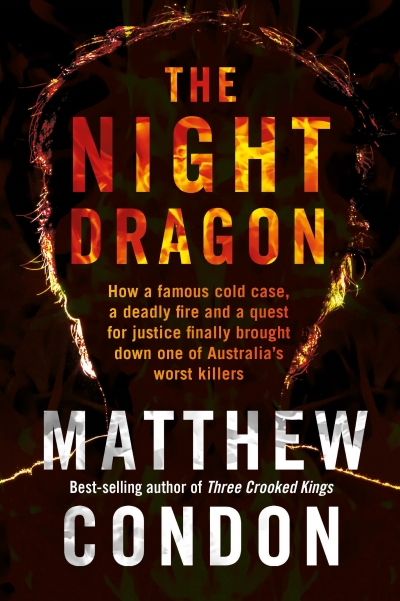 In 2013, Matthew Condon published Three Crooked Kings, the first in his true crime series delving into the murky, sordid, and often brutal world of police corruption in Queensland.  That year, he wrote in Australian Book Review that, after finishing his trilogy,  he planned to ‘swan dive into the infinitely more comfortable genre of fiction’.

The story of disgraced ex-commissioner Terence Murray Lewis concluded with All Fall Down (2015), but there was no swan dive. The book was quickly followed by Little Fish Are Sweet (2016). Condon evidently had more to ask of that era of bagmen, crooked cops, and unsolved crimes. He returns to Brisbane’s underworld with The Night Dragon, part character study of psychopathic criminal Vincent O’Dempsey,  and part investigation into his role in Brisbane’s Whiskey Au Go Go massacre and its links to a decades-old cold case: the 1974 murders of Barbara McCulkin  and her two young daughters.

Just after 2 am on 8 March 1973, the Whiskey Au Go Go nightclub in Fortitude Valley went up in flames. Fifteen people died, making it Australia’s worst mass murder since the frontier wars. Two men were arrested: John Andrew Stuart and James Richard Finch. Both protested their innocence, and doubts about the nature of their involvement continue. Less than a year later, McCulkin and her daughters vanished from their home in Highgate Hill. McCulkin knew too much about what happened that night.

Ben Smith teaches academic and professional writing at Flinders University, South Australia. He holds a PhD in creative writing and is currently working on a true crime book about undercover policing and corruption in 1980s Queensland, which has been made possible with the assistance of a grant provided by Arts SA.

Ben Smith teaches academic and professional writing at Flinders University, South Australia. He holds a PhD in creative writing and is currently working on a true crime book about undercover policing and corruption in 1980s Queensland, which has been made possible with the assistance of a grant provided by Arts SA.