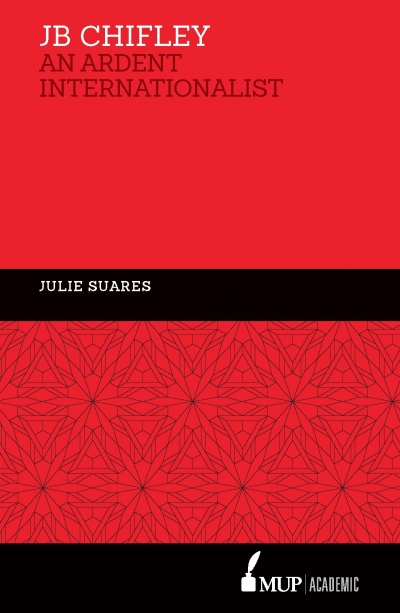 One of the risks in writing about the history of Australia in world affairs is the ease with which ideas and visions can be flattened.  If you start from the premise of Australia’s small-to-middle-power standing and diminished agency among other nations, you might conclude that ideas mattered less than adroit lobbying and alliances. Even if you find greater Australian activism by elevating the role of trade, pointing to the hard-headedness in trading with important partners such as Britain, Japan, and, more recently, China, this doesn’t necessarily invite exploration of world views. If the search for security in a rapidly changing region is the metanarrative, then, arguably, what you need are powerful and reliable friends more than innovative thinking about alternatives. But, as Julie Suares demonstrates in her persuasively argued book, this should not apply in the case of  Ben Chifley and Australia in the world.

For Chifley, the middle decades of the twentieth century were meant to reveal the full benefits of arbitration and regulation, both domestically and internationally. Having witnessed the hardships endured during the Depression years of the 1930s, he also saw the period as one that demanded great learning. He read voraciously on the related themes of economics, trade, finance, and international relations, and his appointment to the Royal Commission into Banking in 1935 hastened this learning process. Conscious of the dominant role of trade in Australia’s productivity, he emerged in the 1940s determined to support measures that would increase trading opportunities, and efforts to build an international regulatory framework designed to prevent rogue behavior and maximise trade through such measures as ease of currency exchange. As treasurer in the Curtin government (1941–45) and prime minister from 1945 to 1949, Chifley was able to bring his considerable powers of political persuasion to bear in pursuit of these aims, but his task was far from easy. His bruising encounters with Jack Lang in New South Wales, and his accumulated learning from watching power and procedures at work in the Labor Party, enabled him to bring the party with him (only just) to endorse the main outcomes of the Bretton Woods Conference held in the United States in 1944. This was where the basics of the new monetary system were hammered out, providing for fixed exchange rates, and setting up the International Bank of Reconstruction (later called the World Bank) and the International Monetary Fund. The planned International Trade Organization was scuppered, but in its place the General Agreement on Tariffs and Trade set out to eliminate barriers to trade. Chifley stared down the likes of Eddie Ward and Arthur Calwell, who were hostile to what they saw as the new ‘Money Power’ rising in the United States, to argue that these measures provided the best path to greater opportunities for Australian exports. This was an economically driven form of new internationalism, matched by a strong sense that it best served Australian interests, and accompanied by faith in the regulations provided and in the rule of law and arbitration underpinning the new United Nations.

David Lowe holds a Chair in Contemporary History at Deakin University. His most recent book is, with Carola Lentz, Remembering Independence (Routledge, 2018).

David Lowe holds a Chair in Contemporary History at Deakin University. His most recent book is, with Carola Lentz, Remembering Independence (Routledge, 2018).