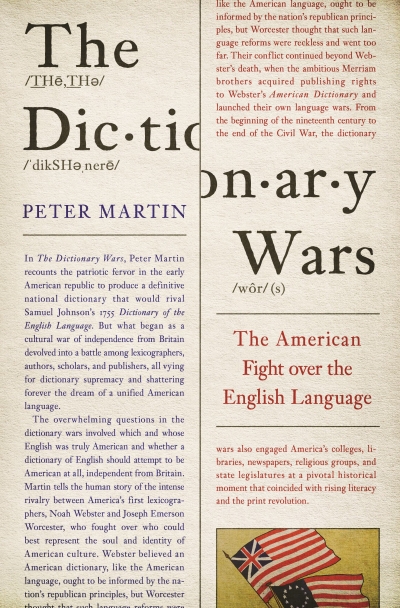 The title of this book refers to the battle for market dominance between the editors and publishers of two rival dictionaries, the one edited by Noah Webster and the other by Joseph Worcester. This battle took place largely between 1829 and 1864, and it was played out in the newspapers and by means of pamphlet warfare, with such titles as A Gross Literary Fraud Exposed, Relating to the Publication of Worcester’s Dictionary in London.

The title also alerts us to the fact that its wider narrative begins in 1783, the final year of the American War of Independence (1775–83), and ends in 1864 in the midst of the American Civil War (1861–65). 1783 was the year Noah Webster (1758–1843) published his first influential work, the Blue-backed Speller, aimed at teaching schoolchildren to spell. Royalties from this work underwrote many of Webster’s later lexicographical enterprises, and the development of the spelling bee in American schools was a significant offshoot of the Speller. 1864 was the year of publication of An American Dictionary of the English Language by Noah Webster, the edition of Webster’s dictionary that marked its triumph over all competitors.

Webster’s first dictionary war, like the War of Independence, was with Britain. The political revolution began in 1775 during Webster’s first year at Yale. After graduation, law did not provide a satisfactory living, so he turned to teaching and the publication of school textbooks. He became particularly concerned about the influence of British textbooks in American schools, and about the high prestige of Dr Johnson’s A Dictionary of the English Language in America. Following America’s successful political break from Britain, Webster came to the belief that there needed to be a linguistic break as well. An American national language should be seen as central to an American cultural War of Independence. In 1789 he wrote: ‘As an independent nation, our honor requires us to have a system of our own, in language as well as government.’