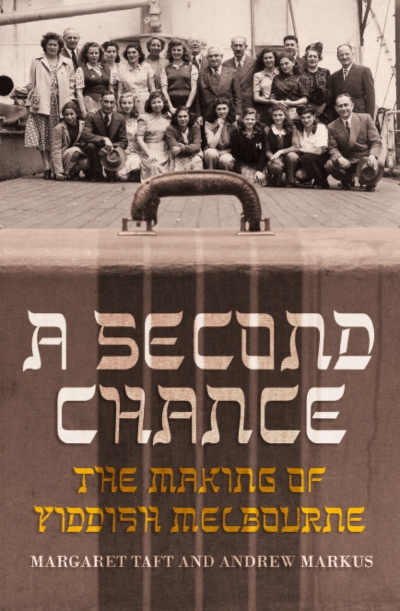 A Second Chance: The making of Yiddish Melbourne

by Margaret Taft and Andrew Markus

In my childhood home, Yiddish prompted a frisson of the suppressed. This was a direct consequence of adults speaking it whenever they did not want us children to understand. Yiddish was the language in which jokes, clever and sometimes ribald, worked. When attempting to translate, inevitably my grandmother would shrug; English was found lacking. Yiddish dimpled our conversations, and the foods that bore Yiddish names dimpled our knees. Its phrases and expressions were expressive, mournful, joyful. Yiddish was as changeable as it was myriad in composition; a melange of German, Hebrew, and other European languages.

Margaret Taft and Andrew Markus’s study of Yiddish Melbourne follows Markus and Danielle Charak’s earlier foray into the subject as editors of the fascinating Yiddish Melbourne: Towards a history (2008). A Second Chance: The making of  Yiddish Melbourne is a detailed study of a community of Eastern European Jewish migrants who arrived in two successive waves; the greatest number of them settled in Melbourne. Initial arrivals were in the 1920s and 1930s, a time of white monoculture. The second wave were Holocaust survivors, predominantly Polish. This migrant community is familiar to readers of the stories of Arnold Zable, Jacob G. Rosenberg, and Lily Brett, or to those who lived alongside them in neighbourhoods that encompassed Carlton, Northcote, and St Kilda.

A Second Chance charts the growth of this community while identifying shifts in Australia. The changing landscape of immigration legislation and public attitudes toward the migrants is explored alongside international developments, with close reference to the rising tides of anti-Semitism in Europe, the Holocaust, and the establishment of the State of Israel. It observes most extensively the decades fron the 1920s through to the 1960s, with its closing chapter contemplating whether Yiddish is in its death throes, as suggested by UNESCO’s categorisation of it as a ‘definitely endangered’ global language.

The state of the language’s usage, while relevant, is not at the heart of this work. As Taft and Markus convincingly argue, Yiddish was not merely a language but a way of life, a means of expressing a robust, vibrant cultural identity. Carlton was its beating heart and the Kadimah (Hebrew for ‘Forward’), a library and cultural centre, was its pumping chambers. While nostalgia held currency, charismatic leaders embraced ‘progressive think[ing]’ and are described as ‘disruptors’ and ‘radicals’. On arrival, these migrants embarrassed the established Jewish community. Unlike their English and Australian-accented counterparts who embraced the idea of ‘blending in’, the newcomers – who ‘had lived full cultural Yiddish lives in large cities in which high visibility was not only the social norm but a badge of honour’ – were ‘noisy north of the Yarra’  Jews. Chutzpah was a distinctly un-Anglo quality. 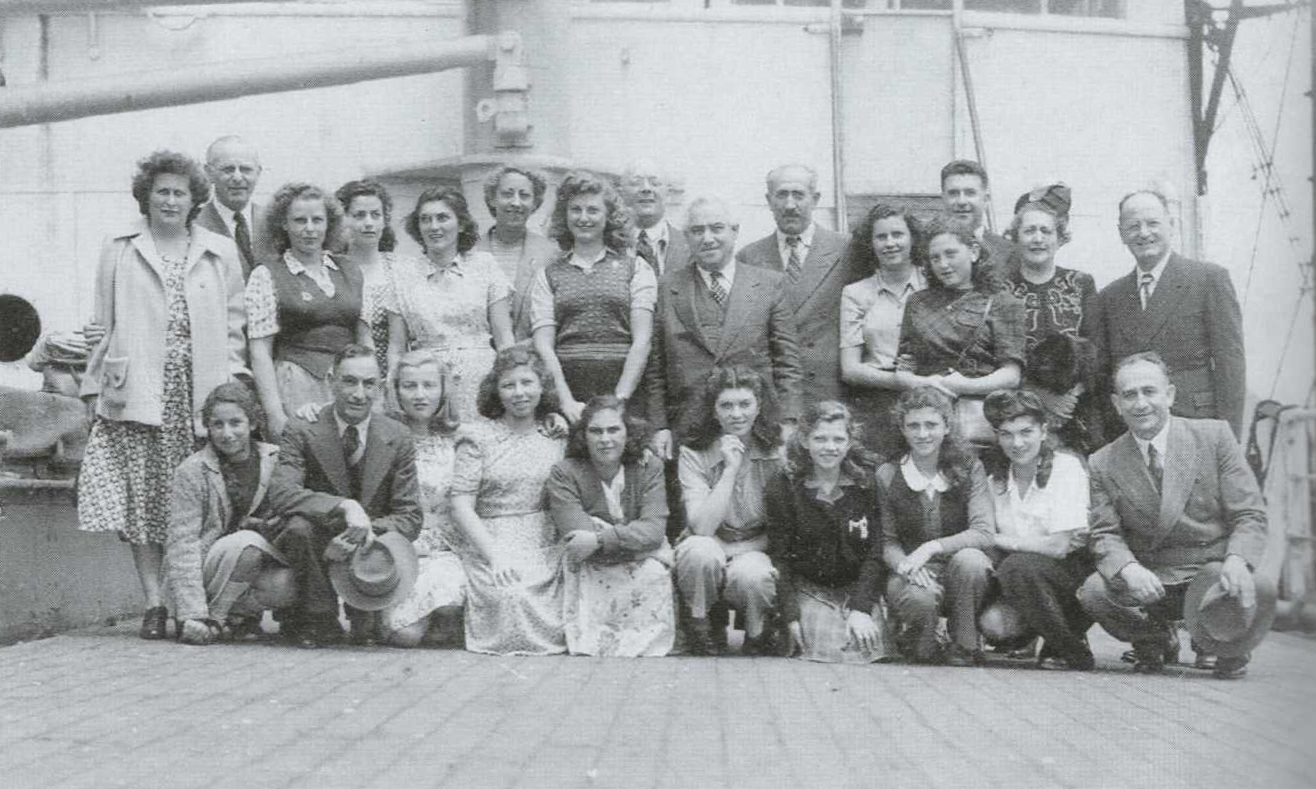 While reading A Second Chance, identifiable echoes and patterns in contemporary immigration debates appear. Anti-Semitism surfaced with the immigrants’ arrivals, and vile tropes appeared in the media and in politics. However, Australian anti-Semitism did not amount to pogroms or attempts at mass extermination, and migrants often experienced a friendliness in personal encounters with Australians. Insert any successive migrant community into this formula and the pattern is clear; Australia isn’t in the habit of extending a warm embrace to foreigners, particularly if they can’t speak English. The current migrant population experiencing this disfavour are the Sudanese, who don’t have the liberty of ‘blending in’. One of this book’s contentions is that the establishment of Yiddish-speaking enclaves fostered a thriving community and made fertile ground for a dynamic culture that further infused the wider Australian community. Detractors of multiculturalism might do well to reflect on this.

Successful integration and support were orchestrated by Jewish organisations. Skilful self-governance was born from persecution in Europe. The Jewish Welcome Society, established in 1922, was extraordinary. ‘[Its] task was to meet every ship, to find work and accommodation for the new arrivals (a course for learning basic English was also organised) and in general to make the new immigrant who has no one to look after him a little more at home.’ It would be a fine contemporary model for other immigrant and refugee communities given that the national record is not one of magnanimity. While the intake of Jewish refugees increased after the Holocaust, they did not receive any assistance from the Australian government, instead relying on Jewish organisations and the munificence of exceptional individuals.

Because the subjects are Jewish, this is a story marked by argument. Yiddishists, with their love of language and intellectual engagement, held varying philosophical positions regarding religion and Zionism, although dissent about the latter reduced after the Holocaust and the establishment of the State of Israel. The Bund, a political secular socialist organisation, was active and often clashed with those who were Zionists. 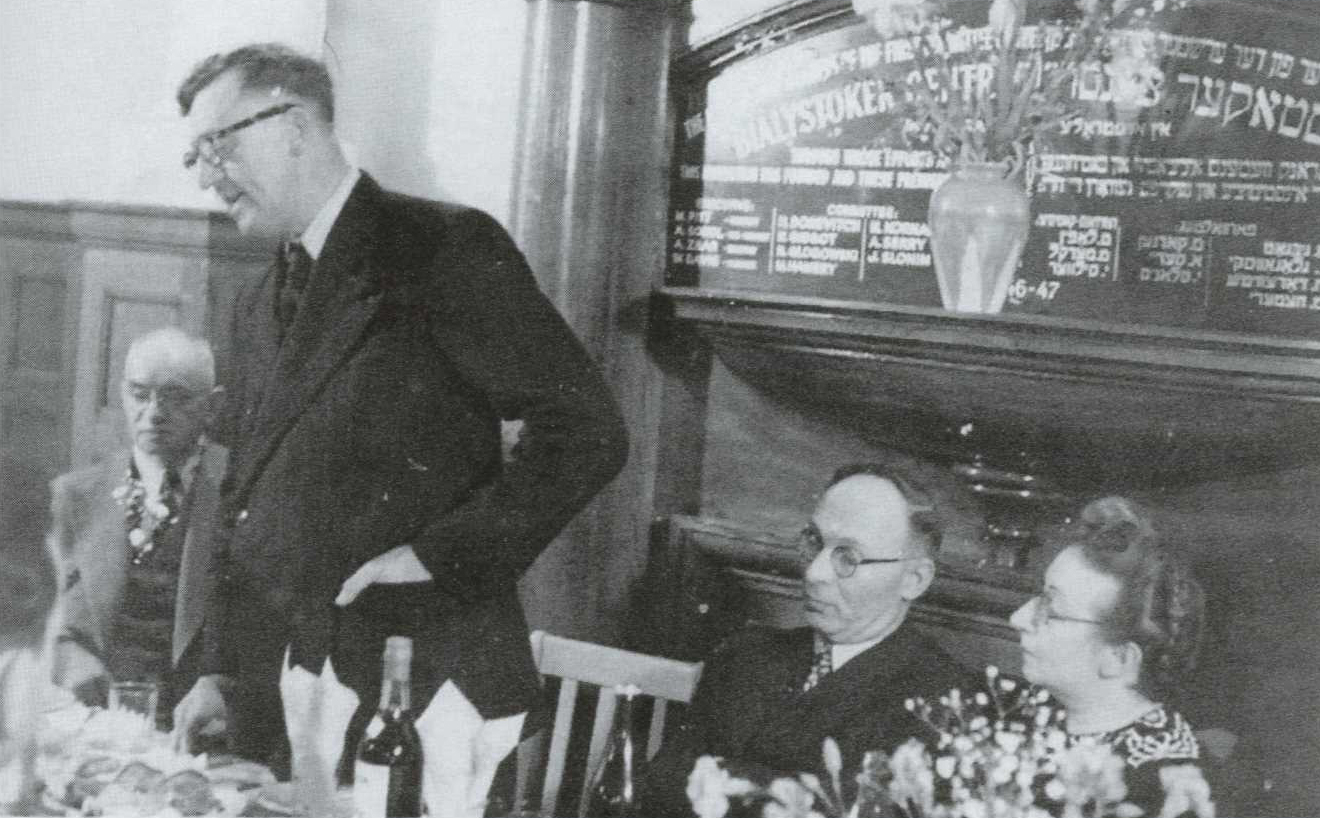 Former Labor Party leader Arthur Calwell speaking at the fiftieth anniversary celebration of the Bund at the Bailystoker Centre, October, 1947

In its heyday, this community supported two Yiddish schools, two Yiddish newspapers, and numerous publications. Notes of wistfulness appear: ‘Literature and theatre were not just superficial indulgences or optional extras, but the life-blood of their existence.’ Cases abound to support this declaration. The Australian première of the Yiddish play The Dybbuk was performed in 1938 in front of a capacity audience of fifteen hundred at the Princess Theatre in Spring Street. This was not provincial amateurism; modernism and cutting-edge theatre techniques like the Stanislavsky Method were employed. Practitioners shaping the theatrical landscape included Yankev Waislitz, founder of the modernist Vilna Troupe, and Rachel Holzer, an internationally renowned Yiddish actress who toured her one-woman shows. This radical spirit lasted until the Holocaust. Thereafter, the taste changed; theatregoing was a bittersweet way to re-experience a former home and family that was no more.

Given the book’s interest in the arts, there is surprisingly no mention of Gilgul Theatre. Founded by Barrie Kosky, this ground-breaking company operated in the 1990s and won Kosky two Victorian Green Room awards for The Dybbuk. Theatre academic and former member Yoni Prior has written about its position as ‘ghetto theatre’, its use of Yiddish songs, and its blend of historical tropes. Gilgul was a return to the days of a revolutionary Yiddish theatre of breathtaking chutzpah.

A Second Chance’s closing depicts the dwindling energy of the Yiddish community. Its final chapter covers an extensive timeframe, stretching from 1967 to the present day. An additional section might have acknowledged home-grown developments. The Bashevis Singers – their name a homage to Nobel Prize-winning Yiddish writer Isaac Bashevis Singer – sing gorgeous melodies, both old and new, in Yiddish. The musicians Evie and Husky Gawenda and Gideon Preiss are relations of Michael Gawenda, former editor of The Age, who mentions them in the book’s preface. The unabashedly and exuberantly named YID! (‘Jew’ in Yiddish) is another music sensation which recently played at WOMADelaide and toured internationally. Gloriously carnivalesque, this twenty-two-piece band incorporates Yiddish spoken word, shtetl sounds foregrounding those of jazz and big band. Yiddish Melbourne might require a new instalment.

A Second Chance: The making of Yiddish Melbourne

by Margaret Taft and Andrew Markus