The Arsonist by Chloe Hooper

The language we use to describe fire, Chloe Hooper points out, gives it a creaturely shape: it has flanks, tongues, fingers, a tail. It licks, it devours. Fascinated by its mythic force, we talk about taming a fire as we talk about taming a beast, but when it comes to vast tracts of bush, we can only contain it and wait for another natural force, the weather, to extinguish the flames.

On 7 February 2009, the weather in Victoria was not friendly. A high-pressure system had settled over the Tasman Sea, bringing temperatures in the mid-forties, the highest recorded since records began in 1859. Any moisture in the air had evaporated; humidity was below five per cent. After a sweltering night, the state’s residents awoke to warnings of extreme danger; all the firefighting bodies were on standby.

Warnings and water tankers notwithstanding, Victoria suffered the worst bushfires in the country’s history. Four hundred separate fires burned in Victoria, generating 80,000 kilowatts of heat, the equivalent of 500 atomic bombs. Along with the destruction of more than one million acres and 3,500 buildings, 180 people lost their lives and 414 were injured, many seriously. The toll on wildlife and livestock was horrendous.

In The Arsonist, Hooper reignites the memories of those cataclysmic events with relentless, devastating effect. Her focus is on one fire, deliberately lit, an 82,000-acre flare-up on the outskirts of Churchill in Central Gippsland. Eleven people died.

Police estimate that fifty per cent of fires are suspicious, and there is a long history of setting fire to the bush. In the locality of Churchill, the history goes back much further; the careful fire farming of the Indigenous dwellers and the reckless firing of vast tracts of ancient forest by early colonial settlers, hungry for farming land and pasture. ‘Here, it was as if this preference for flames was as much in the DNA of certain locals as it was in the plants,’ she writes.

The Arsonist begins with a member of the arson squad sitting at the intersection of two nondescript roads in a forestry plantation. On one side, the trees are untouched, neat dark rows of Pinus radiata stretching to the horizon. On the other side, a plantation of Eucalyptus globulus (full of flammable oil) has been torched. Americans call them gasoline trees, as fit for purpose as a Molotov cocktail. Hooper likens the scene to an image from the pages of the Brothers Grimm:

Picture a fairytale’s engraving. Straight black trees stretching in perfect symmetry to their vanishing point, the ground covered in thick white snow. Woods are dangerous places in such stories, things are not as they seem. Here, too, in this timber plantation, menace lingers. The blackened trees smoulder. Smoke creeps around their charcoal trunks and charred leaves. The snow, stained pale grey, is ash.

Only one per cent of arsonists are caught, but the police had a suspect almost immediately. Brendan Sokaluk and his distinctive blue Holden sedan had been seen in the area, and the car was abandoned at an odd angle just metres from where the fire had started. Sokaluk was brought in for questioning. Hooper gained access to the arson squad and Sokaluk’s legal team; she interviewed friends, work colleagues, and family, and followed the often harrowing court case, trying to answer basic questions: What did he do? Why did he do it? What makes an arsonist?

The book – divided into three sections: ‘The Detectives’, ‘The Lawyers’, and ‘The Courtroom’ – is an attempt to give a rounded view of Sokaluk, from those who wanted to clear his name as well as those who wanted to lock him up. Did Sokaluk fit the bill of an arsonist too neatly, Hooper asks. Was he fully aware of the consequences of his actions? We learn that Sokaluk, thirty-nine in 2009, was on the autism spectrum and had been picked on all his life. 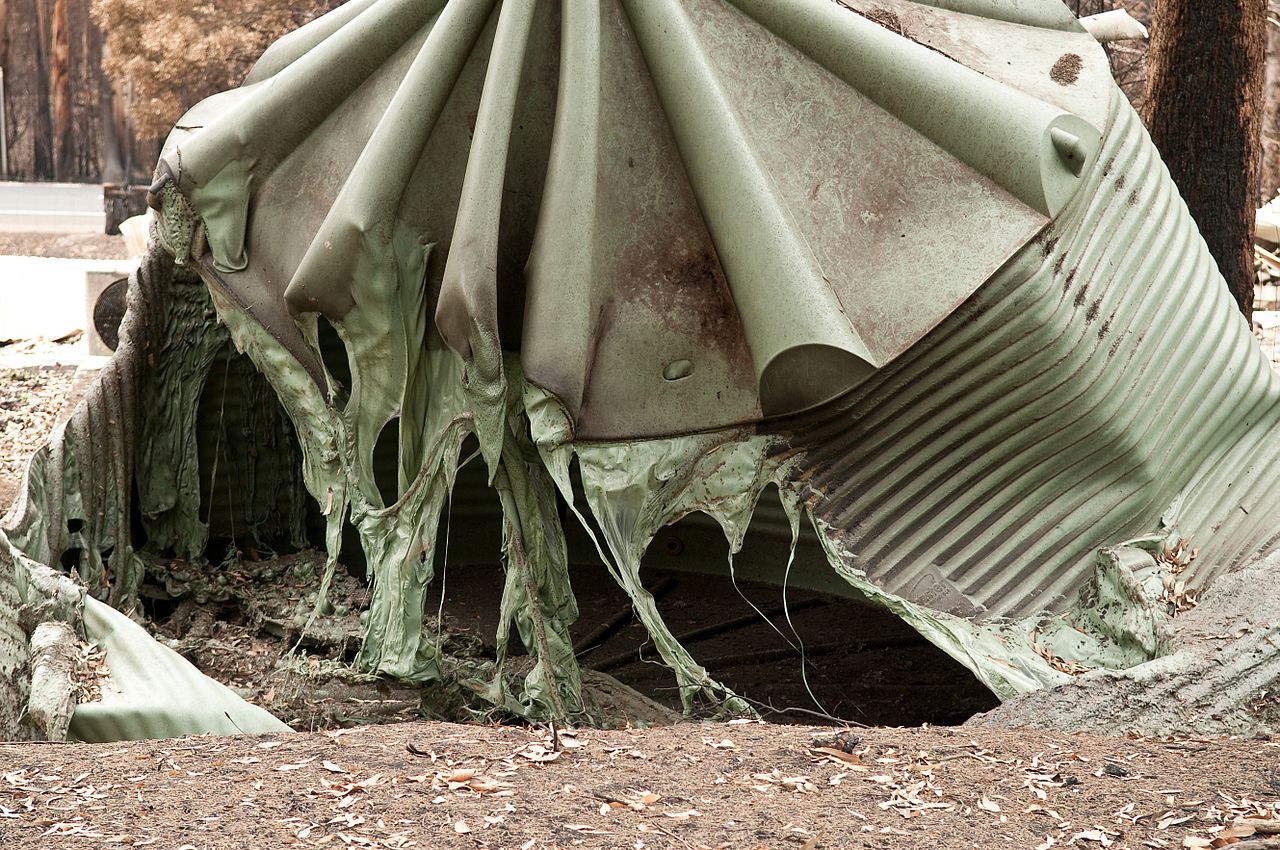 The Latrobe Valley, where Sokaluk grew up, may have the world’s largest brown coal deposits, but it is also an area of significant disadvantage. The typical social profile of an arsonist is of a male, commonly unemployed, with a fractured social background, a history of family dysfunction, addiction, abuse, and poor social and interpersonal skills. Sokaluk shared some of these problems, but he had a loving and supportive family. He lived independently and had had girlfriends. He also held down a gardening job for eighteen years, though he was disliked by most of his colleagues for perceived slyness, occasional aggression, and general incompetence. He’d taken indefinite stress leave two years earlier.

As with many works of reportage set in depressed semi-rural settings (the 1997 Victorian case of murdered child Jaidyn Leskie comes to mind), there is a sense of middle-class urbanites peering over the back fences of these ‘unfortunates’ in horrified fascination. Hooper, all too aware of the pitfalls of prurience, does her best to avoid them: we’re never made to regard Sokaluk as merely a type. This is an individual, though his motives remain opaque and his actions caused devastation. 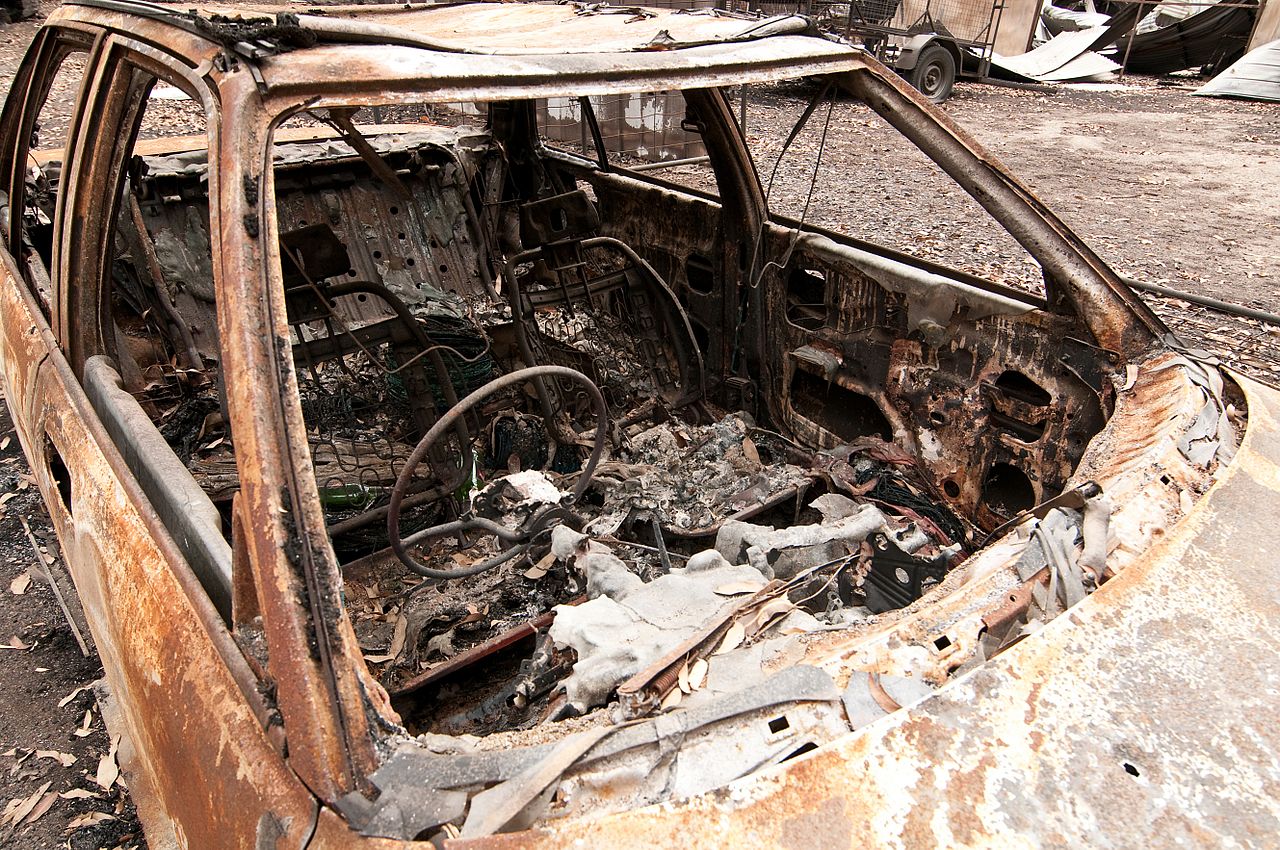 A burntout car at Kinglake after the Black Saturday bushfires (photo by Nick Pitsas, CSIRO)

Unlike The Tall Man (2008), Hooper’s examination of the events surrounding the death in custody of Indigenous man Cameron Doomadgee, placing Sokaluk’s life and times in the broader context, doesn’t reveal a far larger failing in Australian society today. The Tall Man exposed the fracture lines in relations between Aboriginal Australia and its white colonisers. It confronted the deeply problematic encounters between the police force and the community on Palm Island, thrown together from different clans and with no roots in place or time.

The message in The Arsonist is muted, its lessons diffuse. There is no feeling of outrage that this case is but one example of a cancer at the heart of society. What do we learn about arsonists? That they have disruptive impulse control and conduct disorders. What can we learn about forestry and monocultures? That a stand of gumtrees will go up like a pack of crackers, that the Indigenous practice of fire farming shaped this land and kept nature in balance, and that we have shaped this land in a way that throws nature out of kilter and makes annual conflagrations far more likely.

One is left with an overwhelming feeling of sadness. An act of arson on the outskirts of Churchill killed eleven people. Elsewhere, poor maintenance by electricity companies ignited fires that caused many more deaths; others were caused by lightning igniting the tinder-dry bush. The exhaustive 2009 Victorian Bushfires Royal Commission drew testimony from hundreds of experts and victims. But memories fade and few people read Royal Commission reports. The Arsonist may not provide answers, but it asks disquieting questions. Bearing witness, it reminds us of the victims and the terror, the senselessness of a flame tossed onto a forest floor, and the awful silence of a landscape razed by fire. 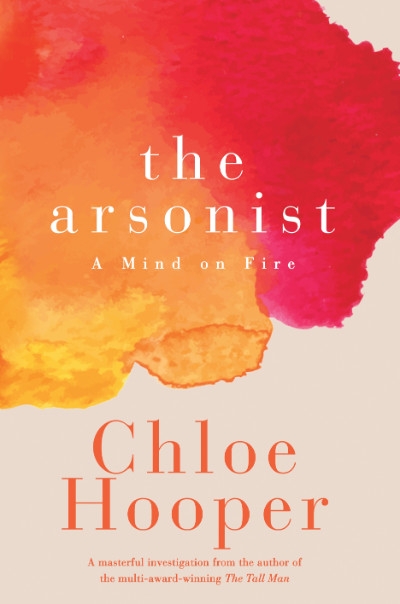