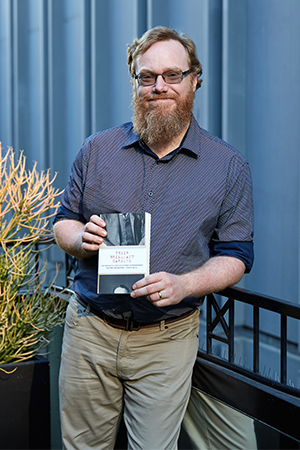 Ryan O'Neill (photograph by Peter Marko)Why do you write?

I write because at the moment no one else is writing the kinds of books I want to read, and so I have to write them. Of course, by the time I have written them I never want to look at them again.

Last night I dreamt I went to Manderley again. But this is the exception. Most often I don’t remember my dreams, and when I do they are nothing like the symbolic and character-defining visions experienced by characters in novels, but simply disjointed nonsense.

When I’m with my wife and daughters.

Jane Austen, Mark Twain, and William Shakespeare. Twain hated Austen’s work and believed Shakespeare did not write his plays, so it would be an interesting evening.

Which word do you most dislike, and which one would like to see back in public usage?

I dislike ‘like’ when used as a form of punctuation or dialogue tag. I would like to see ‘flibbertigibbet’ used more.

When I was a teenager, I loved the novels of Stephen King. ‘Unputdownable’ may be a cliché, but that’s exactly what they were. Sadly, as I grew older, I found that I could no longer enjoy King’s wonderful plotting and characters because of his terrible writing style.

The act of writing impedes my writing. The books I write in my head are perfect. Unfortunately, translating them onto the page ruins them.

There is a worrying tendency among writers to assume that any critical evaluation of a work that falls short of a panegyric is a hatchet job. Also, there is a tendency for reviewers to go too easy on awful writing. As Brigid Brophy said, ‘The critic who lets you know that he always looks for something to like in works he discusses is not telling you anything about the works or about art; he is saying “see what a nice person I am”.’ Australian literary criticism could do with fewer nice people.

No. If we could convince Australians that writing was a sport, much more notice would be taken.

A hugely ambitious novel told in a multitude of styles which I intend to be an Australian Ulysses, or a Kangaroolysses, if you will.

Ryan O’Neill is the author of The Weight of a Human Heart, Their Brilliant Careers, and The Drover’s Wives. He was born in Glasgow in 1975 and lived in Africa, Europe, and Asia before settling in Newcastle, Australia, with his wife and two daughters. He teaches at the University of Newcastle.