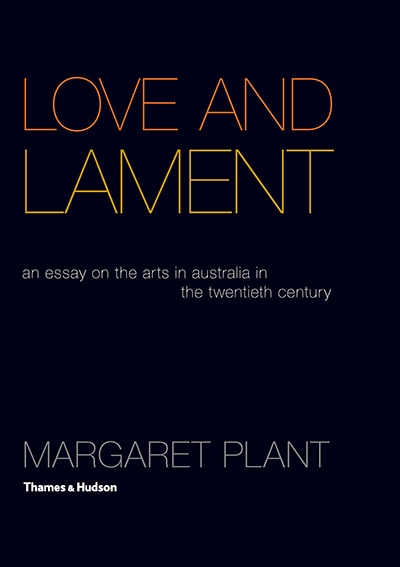 Love and Lament: An essay on the arts in Australia in the twentieth century

Love and Lament offers a bracingly revisionist and upbeat account of how the arts flourished across a broad cultural spectrum in Australia over the course of the twentieth century. Margaret Plant, an emeritus professor of the visual arts at Monash University, argues explicitly with the thesis propounded by Keith Hancock, Donald Horne, and others that Australian cultural taste was ‘conservative and backward’. In ranging widely across architecture, film, photography, music, dance, and popular culture, as well as literature and painting, she demonstrates convincingly that, as she puts it, there was ‘no dormant period’ in Australian cultural and artistic life during this time.

Plant’s book is organised conceptually in terms of decades, with ten chapters stretching from ‘Bush, Desert, Film and Federation: 1900 to 1910’ through to ‘The 1990s: Conflicts, Museums, Ceremonies and the Millennium’. The strength of such an approach is that it enables a multivalent, wide-angled portrayal of each different decade, showing how well-known figures intersected in sometimes circuitous ways with the cultural politics of their time. It also integrates a great many fascinating oddball details, as for example with her account of the theosophical radio station 2GB that operated in the 1920s, or of silent cinema director Charles Chauvel’s efforts to run a ‘Chauvel School of Scenario Writing’ in Sydney from 1933 to 1936.

Love and Lament: An essay on the arts in Australia in the twentieth century