Dear Editor,
It was disappointing to read Stephen Mills’s commentary on my recent Making Modern Australia: The Whitlam government’s 21st century agenda (ABR, 11/17). From a collection of eleven chapters Mills refers to just four and fails to mention the remaining seven. In doing so, he renounces any realistic attempt at a ‘review’ of the collection as a collection. There is no indication of the breadth of the book nor of the authors; the contributions of Stuart Macintyre, Murray Goot, Carol Johnson, James Walter, David Lee, and Greg Melleuish are simply ignored. Since these remaining seven chapters cover topics immediately identifiable as having strong contemporary resonance, to ignore them in a review that claims the collection fails to evidence the Whitlam government’s twenty-first century agenda is puzzling. 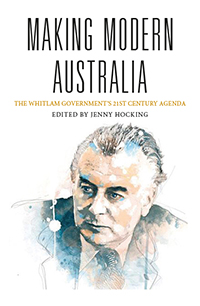 Mills has nothing but praise for each of the four chapters he mentions. How puzzling, if not absurd, that Mills can then ask, ‘what is the implication [of this] for modern Australia?’ Was the protection of universal health insurance and its counterpoint ‘medi-scare’ not a key issue in the double dissolution election just last year? And was that election itself not a failed attempt by Prime Minister Turnbull to do as Whitlam had successfully done in 1974 and use the mechanism of s. 57 to pass stalled legislation through a Joint Sitting of both houses of parliament? Whitlam remains the only prime minister to have done so, yet Mills sees no implications in this for modern Australia.

Likewise, Michelle Arrow’s exploration of the Royal Commission into Human Relationships into every aspect of ‘sexual citizenship’ only leaves Mills pondering how this in any way demonstrates ‘the claimed Whitlam agenda for the twenty-first century’. Seriously? That this comment could be written in the midst of the same-sex marriage debate and the Royal Commission into Institutional Responses to Child Sexual Abuse is remarkable.

Finally, I simply cannot reconcile Mills’s prime concern being not with the individual contributions but with the lack of a preface, without which, Mills suggests, ‘the book lacks coherence’. While it is gratifying to see individual contributions acknowledged, Mills fails to see the significance of their collectivity – as if their presentation in singular form has somehow diminished their intrinsic and acknowledged value. The contributors, and most importantly your readers, deserve better than this.

It must be a professional failing of the academy that its inhabitants too often assume the coherence and relevance of their output as self-evident. That at least seems to be the case here, where the purported editor did not see it as necessary in the book itself, or even in her letter here, to provide any rationale, theme, or context to pull this diverse collection together. Instead it is all supposed to be ‘immediately identifiable’. Readers may join the dots as they see fit; the ‘intrinsic and acknowledged value’ of the contributions, it seems, needs no further elaboration.

The fundamental point of my review was this book’s ‘agenda’ title raises valid questions – about causality, political reform, and the recurrence of public policy problems – that should have been addressed by an editor. My review did acknowledge the breadth and credentials of the contributors, and argued that they have been let down. Lest readers be misled, Jennifer Hocking’s own chapter on s. 57 makes no reference to the Turnbull double dissolution or to ‘medi-scare’; likewise, Michelle Arrow’s chapter does not mention the same-sex marriage debate or the Royal Commission into Institutional Responses to Child Sexual Abuse. So context, it seems after all, is useful. But for that you’ll need to read the newspapers.

Dear Editor,
How much I enjoyed Elisabeth Holdsworth’s illuminating essay ‘If This Is a Jew’ (ABR, November 2017). In particular, I loved Elisabeth’s description of her ‘feast of audacious hospitality’. While I have allegiance to no particular faith, I take great pleasure in occasional visits to different places of worship – be it temple, synagogue, mosque, or church – for the sense of unity among the congregation, for the peace, calm, and hope that somehow thicken the very air, and for the uniqueness of the individual services. Overall, how similar are the messages. As Holdsworth points out ‘... as so often happens when Jews and Muslims get together, we ended up discussing what unites us rather than what divides us’. If I were allowed one wish, it would be that from the ignorance and upheaval of the current day, understanding and coherence not only eventuate, but triumph. It begins by educating ourselves and by abandoning our fears and prejudices – and it ends in a willingness to listen to others.

Dear Editor,
I attended the first of Musica Viva’s Melbourne performances of Rachel Podger and The Orchestra of the Age of Enlightenment (reviewed by Zoltán Szabó in ABR Arts). Here, too, Podger subtly interacted with the audience along the lines of what Szabó described. But I welcome such gestures. The economics of professional music-making in Mozart’s Europe were such that performers had to make sure that their audiences had a good time. Concert-goers routinely drank and ate during concerts, and no doubt talked as well. Any walls between the performers and audiences would have been very thin, and I think performers would have worked hard to engage their listeners, probably much more than Podger does. 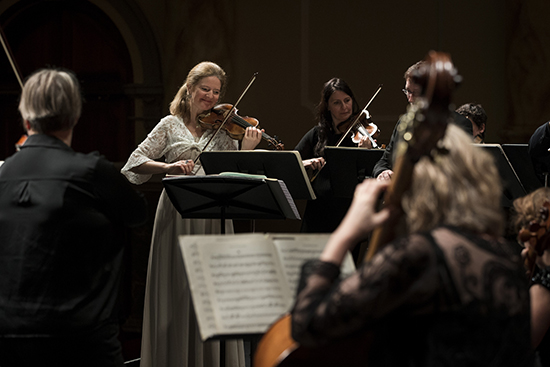 It is time we moved away from music performance as purely cerebral, desiccated, and devoid of bodily communication between performers and audiences. It would make performances of classical music more engaging, accessible, and successful.

I discussed Rachel Podger’s ‘interaction’ with the audience because I did not find it subtle at all. It distracted from the enjoyment of the music. What may have been common practice centuries ago has changed. Thank goodness too! Otherwise our audiences would also eat, drink, and make bodily noises during performances. Nowadays we pay more attention and sit quietly as a sign of respect towards the artist’s hard work and the performance.

Like it or not, the fourth wall is there, in theatre, ballet, opera, concert halls. It fulfils a purpose – one with which I happen to agree – and in this concert the convention was ignored for no obvious or justifiable reason.