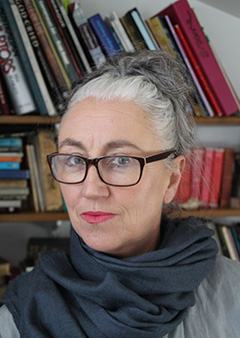 I am running out of other options.

Yes. I have always been very attached to my dreams, and I am so glad that someone is finally interested in them.

At home with my two children and my husband, but only if the house is tidy. I need superficial order to relax.

Douglas Sirk’s Imitation of Life (1959). I have seen it many times. As a critic somewhere wrote, the melodrama plays you for all you are worth.

Grace Paley’s Enormous Changes at the Last Minute. I recently read Han Kang’s The Vegetarian. It is a strange novel that was hard to get a handle on, but once grasped was difficult to let go.

I dislike the word ‘cunt’. I know that is has been appropriated by women and is often used for strong contextual effect, but the hard c at the beginning and the sharp t at the end set my teeth on edge. It is a scary word, an effective one no doubt, but I have never been able to stomach it.

A word I would like to see back in public usage is ‘pollywaffle’. Strictly speaking a discontinued confectionery popular in my youth, it would be a useful verb to identify the worst kind of political discourse: ‘to pollywaffle’.

I admire Rachel Cusk and Mohsin Hamid. I am welded onto Kazuo Ishiguro. I am eternally grateful to Toni Morrison, who moved me when I was at a very immoveable age. I once loved Angela Carter, and I am pretty sure I still do.

I’m not big on heroes, but I do like a bit of the picaresque, so I would have to say Dickens; nothing like orphanhood to send a character on their way. So, Pip and Esther Summerson.

When I outgrew children’s books, I was lost for a while. I began to read all my Mum’s books. I read Leon Uris and James A. Michener; I adored Exodus and The Source. I grew up wanting to be a Jewish archaeologist. Then I read Morris West’s Shoes of the Fisherman and racy Mario Puzo and my ambitions became confused. I also read an Everyman or Book of the Month James Baldwin’s Giovanni’s Room and it was a revelation. I am not sure if I would get through many of them now.

Writing and life are not amenable. My body likes to move, stretch, and busy itself along. Writers need to sit down (or stand). My friend Amanda Curtin tells me that sitting is the new smoking. It seems that writing can make you a pack-a-day girl.

I like the long form, essays. I hate short reviews. They are evil little hard, constipated things.

Not much experience. In my home town I felt marginal. I was never on that bus with all the other writers going back to the hotel. I sold one book and that was to Nathan Hill, with whom I shared a panel.

Intellectually, but not materially.

A novel, a memoir, a book of poetry, a play, and a television series.

Josephine Wilson is a Perth-based writer. Her second novel, Extinctions (UWA Publishing, 2016), won the 2017 Miles Franklin Literary Award after winning the inaugural Dorothy Hewett Award in manuscript form. She completed her Masters of Philosophy at Queensland University and her PhD at the University of Western Australia. She teaches in the Humanities Honours Program at Curtin University.