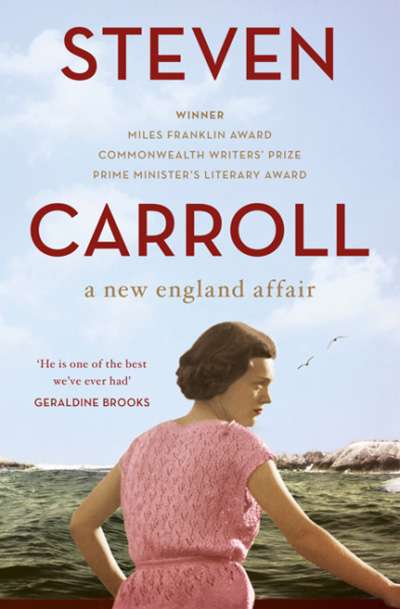 In his fiction, Steven Carroll stretches and slows time. He combines this with deliberate over-explaining and repetition, the echoing of memories and ideas, coincidence, and theatricality. A distinctive rhythm results: when reading his work, I often find myself nodding in time to the words. Occasionally – and it happens now and again in his new novel, A New England Affair – the prose starts to resemble a pizza with too many toppings. Mostly, though, Carroll’s approach to fiction succeeds even when it seemingly shouldn’t. If it’s a mystery – a minor miracle, even – that the various techniques he employs come together to create stylised and yet fresh prose, then that mystery itself becomes part of the pleasure of reading a Carroll novel.

Carroll is also a serial serialist. A New England Affair, as with The Lost Life (2009) and A World of Other People (2013), riffs from T.S. Eliot’s Four Quartets. Here, Carroll makes use of Eliot’s ‘The Dry Salvages’ (1941), inspired by rocks off the Massachusetts coast, where Eliot grew up. When Carroll animates the rock, the waves, the wind, the coast, what is striking is how comparatively fragile his human characters are as they move through the physical and metaphysical world, making mistakes, enduring, ageing.

As with many of Carroll’s novels, the aching passage of time anchors A New England Affair: ‘The lead foot of Emily Hale steps on the accelerator, speeding into the past.’ The novel is a portrait of a long but secretive, platonic, and odd companionship between Eliot – American by birth, English by preference – and fellow New Englander Emily. Tom and Emily – or T.S. Eliot and Miss Hale, to give them their public titles – are a couple of sorts, their bond sometimes excruciatingly real but sometimes seemingly more akin to a sham.