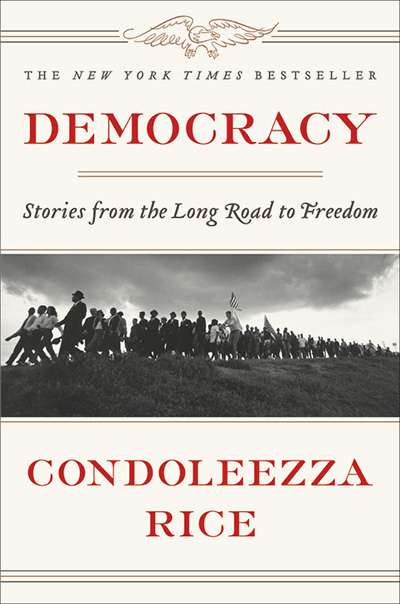 Democracy: Stories from the long road to freedom

What are the cornerstones of democracy? If you ask Condoleezza Rice who, as the sixty-sixth US secretary of state, was responsible for introducing democracy to autocratic states like Afghanistan and Iraq, her answer would go something like this: the right to speak one’s mind; freedom from arbitrary rule; leaders empowered by popular consent; equilibrium between the three branches of government and between federal and state power, minorities and the majority, state and society. But to this list Rice would add faith and institutions – the underlying threads that, for her, tie democracy’s various strands together. They are democracy’s true genius, and the cornerstones of her new book, Democracy: Stories from the long road to freedom.

Rice tells a story from her childhood, long before she became America’s most senior diplomat during George W. Bush’s presidency. A child of seven, she was driving home from school one day with her uncle when they passed a long queue of black citizens waiting to vote. This was 1962 Alabama and the segregationist candidate George Wallace was running for governor. The young Condi, who already knew that Wallace was bad news for blacks, having overheard her parents talking about him, turned to her uncle and asked, ‘If all those black people vote, how can Wallace win?’ Her uncle replied that the blacks couldn’t stop Wallace because they were still the minority. ‘Then why do they bother?’ she asked. ‘Because it is your duty to vote,’ he responded. ‘And one day that vote will matter.’

Democracy: Stories from the long road to freedom