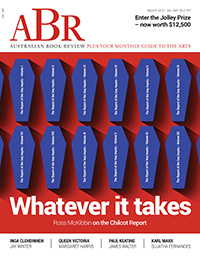 Dear Editor,
We cannot be reminded often enough of the perfidy that led in succession to the Iraq disaster, the continuing débâcle in the Middle East, the refugee outflow, and even to populism, Brexit, and Donald Trump. Ross McKibbin’s review of the Chilcot Report does this admirably (‘Whatever It Takes’, March 2017).

He doesn’t note, however, that if Chilcot, whose evidence ends at 2009, had been published sooner than 2016, Britain’s subsequent adventures in Libya, Iraq, and Syria would probably have been voted down by Parliament and the world would be different. Moreover, Chilcot was allowed to report the exchanges Tony Blair had with George W. Bush only from Blair’s side, while the agreement between Bush and John Howard, and its date, were not in his terms of reference.

McKibbin compares Blair’s foolhardy deployments with Howard’s risk-averse commitment on the cheap to the Iraq War coalition, and this was confirmed by an internal Defence report published by Fairfax in late February. But successive Australian governments have refused a Chilcot-style inquiry, enabling them to dodge responsibility for the meaningless, legally dubious deployment of troops to Iraq and Syria which continues longer than both world wars put together.

Unless Australia changes the way governments decide to go to war, more such disasters will follow.

Dear Editor,
ABR’s coffined March cover is not only the best one I have seen on the magazine, it is one of the best magazine covers I can recall. Chilling is what comes to mind. The brilliance lies in the ingenious way the consequences are portrayed. 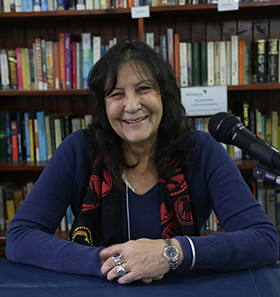 Dear Editor,
Kerry Reed-Gilbert’s contribution to States of Poetry is a wonderful acknowledgment of an inspiring strong Elder. Her poetry is strong and deep, and her gifts to the Aboriginal and Torres Strait Islanders First Nations writers and the local Us Mob writers will be her enduring legacy.

Kerry Reed-Gilbert, a Wiradjuri woman from central New South Wales, has five poems in ABR’s 2017 ACT States of Poetry, an open- access online national anthology. Next month we will publish a selection from the thirty poems published there, as selected by state editor Jen Webb. Ed.

Dear Editor,
Margaret Harris (ABR, March 2017) observes that Queen Victoria is ubiquitous in Australia, ‘memorialised ... in the names of two states and innumerable other places’. I hope she will forgive me for pointing out that, using the excellent Geoscience Australia search engine, it is now possible to count the places and geographical features in Australia to which Queen Victoria still lends her name, either directly or by association. The results are fascinating. Of course, it is hardly a competition, but nevertheless the tally by my calculation is Queen Victoria, 148 versus Duke of Wellington, 466. 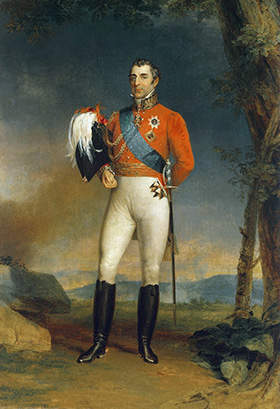 Portrait of the Duke of Wellington by George Dawe, 1829 (Hermitage Museum via Wikimedia Commons)It is a startling fact that no individual has been and remains commemorated more often in Australia, either directly or by association, than Arthur Wellesley, first Duke of Wellington, Marquess of Douro, and Earl of Mornington. The map of Australia currently yields twenty-eight places or features named Wellesley; 126 Wellington; three Douro, and fifty-two Mornington. Wellington’s military victories are also directly commemorated: Seringapatam 1 (a reef off the north-west coast of Western Australia); Copenhagen 3; Talavera 6; Corunna 14; Salamanca 3; Nive 21; Pyrenees 7, and, of course, Waterloo 109, and even Hougoumont (a pub in Fremantle). The residences that were presented to Wellington by a grateful nation are likewise marked on our map: Apsley, no fewer than fifty-eight times (for Apsley House in London) and Strathfield Saye or Stratfield Saye or Strathfieldsaye (in Hampshire, which was to Wellington as Blenheim Palace was to the Duke of Marlborough), an impressive total of thirty-four.

Why is this so? Certainly, Wellington had a thirty-year head start on Queen Victoria. He was a brilliant general who did more than anybody else to unseat Napoleon (twice). Many of the Iron Duke’s veterans migrated to the Australasian colonies and made up a hefty proportion of the officer class right up to the 1850s. They obviously did a lot of the naming prior to Victoria’s accession.

Wherever you happen to be in this country, you are never far away from a spot that is named after the Duke of Wellington

Dear Editor,
The first two paragraphs of Peter Craven’s review of Tim Winton’s The Boy Behind the Curtain (ABR, December 2016) surprised me, with the suggestion that he could be ambivalent about the author’s writing; Winton’s prose, he suggested, was ‘sometimes just a bit too self-delighting’. I had never felt that way. Cloudstreet was the first book I read that made me reread paragraphs simply because of how well they were written. In his largely positive review of The Boy Behind the Curtain, Craven showed that he was fair-minded (and certainly not fawning). Geoffrey Wells’s response to that review (Letters, January–February 2017) seemed much less fair-minded. To imply that an experienced and often forthright reviewer like Peter Craven was ‘fawning to a fault’ seems quite insulting.

Wells expects a memoir to be personal, yet accuses Winton of rarely going beyond ‘his own outrage and sadness’. Who else’s outrage and sadness does Wells wish Winton to express in his own memoir? Apparently Winton is obsessed with his own personal feelings. As Brian Matthews says in his review of Winton’s other memoir, Island Home (ABR, November 2015), ‘Winton ... has little trouble in finding the words, tone, and rhythms, but even he seems to rejoice at times in the freedom of memoir ... the writer of memoir can be triumphantly personal, quixotic, eccentric, risky, and daring.’ Perhaps it is the quixotic part of this new memoir that bothered Wells?

I don’t think Winton is a ‘sacred cow’. As for the suggestion that devotees of Winton’s prose like it because they don’t have to think, question, and learn: I can only thank Wells for prompting me to go back and reread some of Winton’s work, so that I could stop thinking, questioning, and learning all over again.