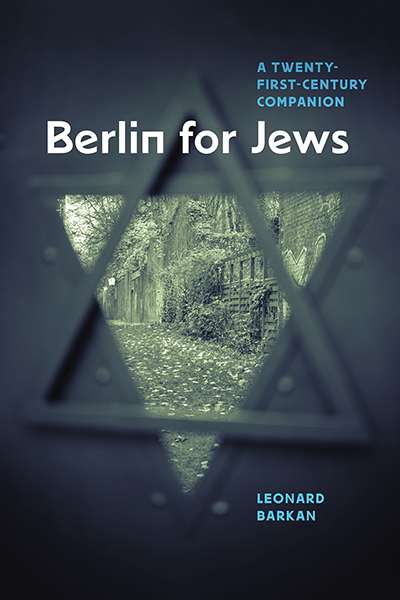 Berlin for Jews: A twenty-first-century companion

The title of this book has a resonance that would not occur, for example, in a text called ‘Paris for Jews’. Most readers will approach the work with understandings and expectations shaped by Hitler and the Holocaust. The title suggests that Berlin is a different city for Jews than for other visitors, and that Jewish Berlin itself is different from ecumenical Berlin. Is this book a travel guide? Is it a travel guide specifically for Jews? These questions and others rumble beneath the chapters, gathering strength as the book progresses. Only towards the end do they start to be addressed.

Leonard Barkan’s quest, although never clearly stated, is to reclaim Jewish Berlin, with its rich and diverse history, from the powerful and seemingly inescapable dominance of the Holocaust. His book is intended as a travel guide to contemporary Berlin, a city that owes much to its post-Enlightenment Jewish residents. For Barkan, contemporary Berlin is Jewish Berlin. Even though buildings have been destroyed and the landscape significantly altered Barkan guides the reader to where notable Jews once lived, landmark buildings stood, and famous salons took place.

The shadow of the Holocaust is not so easily dismissed from any consideration of contemporary Berlin. Indeed, it could be argued that Barkan’s quest occurs because of the Holocaust. In 1933, when Hitler assumed power, Germany had a population of sixty-seven million people. Of this number, less than one per cent, about 520,000, were Jewish, and one third of the entire German Jewish population, approximately 160,000, lived in Berlin. At the end of the war only a handful were left, and most of their legacy had been destroyed. The roll-call of well-known Jews who called Berlin home includes Stefan Zweig, Rosa Luxemburg, Hannah Arendt, Mahler and Schoenberg, Heine and Marcuse, and a swag of physicists including Max Born, Leo Szilard, and Albert Einstein

Andrea Goldsmith is a Melbourne-based novelist and reviewer. Her novels include The Prosperous Thief (2002), which was short-listed for the Miles Franklin, the acclaimed Reunion, and The Memory Trap (2013), a novel of monuments, marriage, and music, awarded the Melbourne Prize in 2015. She also writes essays and articles, many of which are posted on her website: http://andreagoldsmith.com.au

Berlin for Jews: A twenty-first-century companion

Andrea Goldsmith is a Melbourne-based novelist and reviewer. Her novels include The Prosperous Thief (2002), which was short-listed for the Miles Franklin, the acclaimed Reunion, and The Memory Trap (2013), a novel of monuments, marriage, and music, awarded the Melbourne Prize in 2015. She also writes essays and articles, many of which are posted on her website: http://andreagoldsmith.com.au