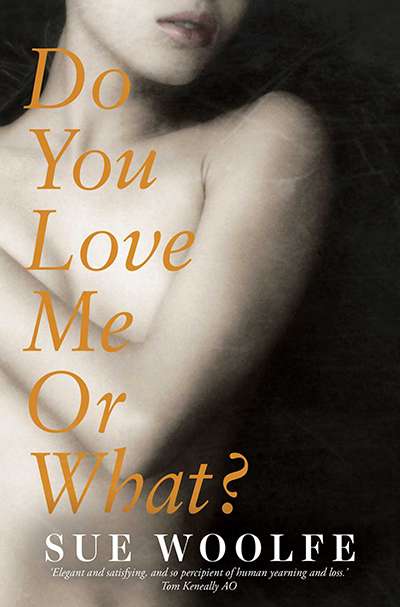 Do You Love Me Or What?

An odd thing happened after I had finished reading this short story collection. I came back to it a couple of weeks later, intending to write this review, and found I had almost completely forgotten some of the stories. Such amnesia is unusual for me. Good short stories generally set up a resonance that lingers, even if not all the details stay in the mind. Does that mean, then, that these are not good short stories? I wouldn’t say that. Uneven, perhaps. Some seem unresolved, more like fragments: although they aim at completeness, and are polished to a finished form, on some level they go on unfurling, not yet ready to declare The End.

This can be a good thing, a sign the writer is not complacent. I know Sue Woolfe’s work as thoughtful, highly intelligent, evolving over many drafts, the product of a mind intensely curious about its own creativity, as if she is constantly asking, ‘Now, what did I write that for?’ She has written about this process in her non-fiction books Making Stories (1993, written with Kate Grenville) and The Mystery of the Cleaning Lady (2007). So it figures that in her Acknowledgements she should analyse the common impulse behind these eight stories, written at different times and developing at different paces. She quotes from Death of a Salesman, where Willy Loman complains about his son Biff’s lack of direction: ‘Not finding yourself at the age of thirty-four is a disgrace!’ Woolfe confesses her own disgrace: at a much older age than Biff, she is still trying to find herself, and all these stories are about women (and one man) trying to find themselves at what Willy would describe as a disgraceful age.

Already a subscriber?
Sign in to continue reading. If you need assistance, feel free to contact us.

Jane Sullivan has been a print journalist in Britain and Australia for more than forty years. Her column about books and writing, ‘Turning Pages’, appears every Saturday in The Age. Her latest novel is Little People (2011).

Do You Love Me Or What?

Jane Sullivan has been a print journalist in Britain and Australia for more than forty years. Her column about books and writing, ‘Turning Pages’, appears every Saturday in The Age. Her latest novel is Little People (2011).