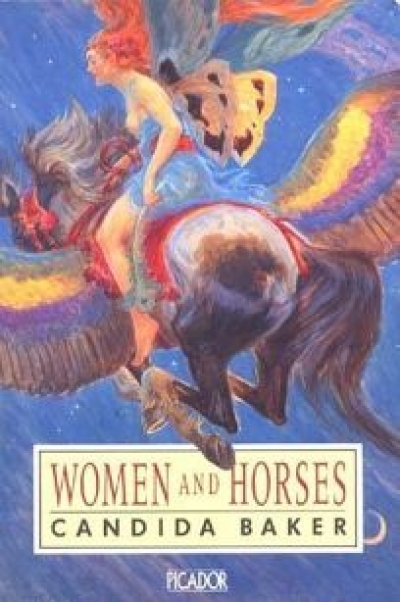 As interviewer to the literary gentry in the Yacker series, Candida Baker could hardly be deemed a stranger to the agonies and ecstasies of the fiction writer’s craft. Her skill as interviewer and journalist has attracted attention and praise, and now everyone who’s been holding their breath to see how Candy Baker would manage her own first excursion into fiction can relax with a sigh of relief.

Women and Horses takes the classic theme of the eternal triangle, tells it two or three different ways as she bounces between Camelot and Paddington, chucks in the 1990s career woman’s dilemma (to be or not to be a mother), and pulls off a happy-ish ending with élan.

The subject matter can’t be called original: more stories have probably been told about adultery and its attendant foolishness than anything else over the millennia, and some readers will say that they’ve heard it all, or something very similar, a hundred times before. But as Helen Garner said when being interviewed by Candida Baker, ‘A writer should at the very least be granted her material, and her subject matter’.

And, of course, her protagonist. Deborah is English born and raised, eldest of the four daughters of a moody, faithless father and a mother so disappointed in life and love that serious alcoholism is her only solace.

Escaping to the other side of the world, to Sydney, Deborah finds herself at thirty-five a competent feature writer for a trendy magazine, married to a jealous playwright, stepmother to his normally rowdy kids, and embroiled in a year-old affair. Disconcerting circumstances force her to recognise that ‘she has never made a conscious decision in her life’. She would rather hide under her desk, or in a psychiatric hospital, but that won’t really do. Something has to give.

Interwoven is the tale of Gueneviere and Arthur and Lancelot, modernised via twists of character (‘Gwen’ has PMT and is happiest designing improved medieval weapons; Morgan le Fay signs letters to her royal brother ‘yours etcetera’). This is lots of fun and casts a clever glow on the twentieth-century characters, but I felt in the end that reducing these mythic giants to human size is a bit of a cheat. We lose the sombre thrilling lesson that even the best of us, those who mightily aspire, are frail, and fail, and suffer. Suffer eternally, I’m afraid; a thought that doesn’t sit easily in the minds of we who are white and thirty-five in Australia in 1990, beset with luxury and an excess of choices.

But I call a novel good which entertains as it calls serious questions to debate. From its effervescent cover to its thoughtful afterword, Women and Horses entertains and questions. Candida Baker has won her novelist’s spurs.

Kate Veitch is a journalist and author who grew up in Melbourne, Australia. Currently, she divides her time between San Francisco and New South Wales, Australia.

Kate Veitch is a journalist and author who grew up in Melbourne, Australia. Currently, she divides her time between San Francisco and New South Wales, Australia.