The Boy Behind the Curtain by Tim Winton

Everybody thinks they know about Tim Winton: the working-class hero from the West; the whale of a man who’s been writing since he was a boy; the master of one of those big Australian prose styles that is muscular and magnetic and sometimes just a bit too self-delighting; someone who straddles the literary and the popular like a colossus.

Whatever you think of The Riders (1994), Dirt Music (2001), or Breath (2008), did anyone ever put them down in a hurry? If I’m sounding ambivalent, I shouldn’t be, because this new self-portrait via a suite of essays is a dazzling book, full of wisdom and wonder, written in, yes, muscular prose but with a staggering, effortless sense of drama wherever you pick it up. Tim Winton can fascinate you and bring you to the point of tears even when you thought you weren’t interested in what he’s talking about.

We begin with the dark biographical melodrama of teenage Tim, alienated and adrift, pointing a gun at passers-by in front of the curtain, not with a desire to kill, not with the gun even loaded, but knowing he could. ‘Lurking there behind my parents’ curtain, I put a gun between myself and the world. I reduced my neighbours to objects, made targets of them. Anything could have happened. None of it could.’

If that sounds self-dramatising, it justifies its every word, including the reflection that he found his way out through words. There is thus a sort of continuity when we jump back to the eight-year-old Winton being subjected to the empty spaces and psychedelic aporias of Kubrick’s 2001: A Space Odyssey, which, he says, ‘sent me through a Star Gate of my own into an expanded reality ... it was a wormhole into the life of the imagination’.

No one is better than Tim Winton at giving dramatic substance to the interface between art and life. It is extraordinary how much he fictionalises the process of factual narration.

His father, a traffic cop, was in a dreadful accident from which he might never have recovered. Something happens that fills young Winton with the terror of that memory. He says he has dreaded such sudden moments but also made them into a kind of aesthetic raison d’être. ‘In my fiction I’ve been a chronicler of sudden moments like these ... my life feels like a topography of accidents... I suppose you could say they form a large part of my sentimental education.’ This tallies with the darker side of Winton’s vision as a writer of fiction without being remotely arty or self-reflexive when he adds, ‘but now I knew that we were not, and never really could be, out of the woods’.

You could accuse Tim Winton of a kind of agnostic Calvinism where the individual is predestined to his own dark woods, but he is always so open and so sane, so modest in his bracing doubts and more bracing faith. He gives a humorous and humane depiction of the working-class Church of Christ community that shaped him and to which his parents were impelled like zealots after his father’s life was saved, perhaps by the intervention of some saint. A sauntering, naturalistic evocation of a narrowly evangelical community, it is full of laughter and farting and the face of human fun. It was that one-time Jesuit Greg Dening who said that at the heart of any absolutism there is an inch of licence that makes it tolerable. Winton is superb and convincing on the subject of how a world of straitlaced people in Pelaco shirts and staid skirts went a great distance towards teaching him what was what.

They taught him, through Scripture, the importance of story and that the example of Christ, so plain, so given to sacrifice and kindness, was a harder saying than all the blood and thunder of the Old Testament. The Word also taught him the power of all words. When St Paul said – and young Winton learned the words by heart – ‘For I am persuaded, that neither death, nor life, nor angels, nor principalities, nor powers, nor things present, nor things to come, nor height, nor depth, nor any other creature, shall be able to separate us from the love of God, which is in Christ Jesus our Lord’, it gave him entrée to the kind of language he would encounter in Hamlet’s ‘what a piece of work is man ...’ He grew up, he says, ‘riding incantatory rhythms toward the stifling reaches of afternoon’, but admits he never would have foreseen that the Church itself would become the greatest threat to his faith. He says he has come to like the smells and bells and that he crosses himself like a papist even if ‘a roomful of rockchoppers certainly brings out the Calvinist in me’, though most of his ‘heroes “belong to Rome”, Thomas Merton, Dorothy Day, Julian of Norwich, Leonardo Boff’. 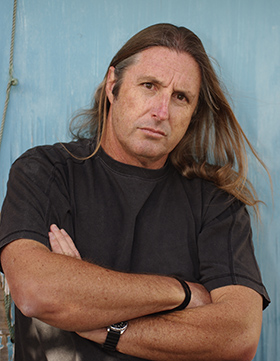 Tim Winton (photograph by Hank Kordas)As some of those names suggest, Winton is very much a man of the left, especially the environmental left. It is notable what dramatic power he conveys in his accounts of how he worked to save an environment where the boodie could come back, and how he pumped his fist silently ‘like a mad barracker’ when it did. He invests his environmental involvements with such a sense of drama and such an evocative sense of the beauties and places at risk that he will bring out the dormant greenie in anyone, because he makes his commitments so patently a blow for life (and analogous to the truth of art). The Boy Behind the Curtain might become a book of prayer and wisdom for the thousands of Australians like Ken Henry who share its passion.

A superb account of working to save the Ningaloo Reef involves a tribute to a cultivated Englishman. There is another evocative and semi-spectral story about the haunted house in Ireland in which he wrote Cloudstreet (1991) and where, later, he felt impelled to write The Riders. These essays are on a par with anything written anywhere in their play of mind and their command of tempo and rhetoric.

Winton, much a man of the beach, indicates that the sheer flow of surfing, its lack of point, makes it his meditation. He has a wonderful tribute to sharks, as well as a reverent homage to that celebrator of beautiful and terrible creatures Peter Matthiessen, who once felt the touch of the Great White. Winton also talks of the baleful irrationality of the Australian attitude to the killer shark. ‘Our demon,’ he says, ‘is silent and it swims.’

This is a rich and brilliant book with a great vibrancy and glow and wisdom. It has a sly account of the enigmas of Elizabeth Jolley and a vivid depiction of the annihilating horror when he discovered that the 1,200-page draft of Dirt Music was not working. There is also a fine sermon on the refugees: all about giving a child a stone when it asks for bread, all about driving an angel from your door when you deny pity, all about what does it profit a nation when it suffers the loss of its soul.

You would go a fair distance to find a better book of essays, separate pieces so powerful they have the ambience of a self-portrait without the burden of the search. The Boy Behind the Curtain justifies its cover’s family resemblance to Gore Vidal’s Palimpsest (1995). 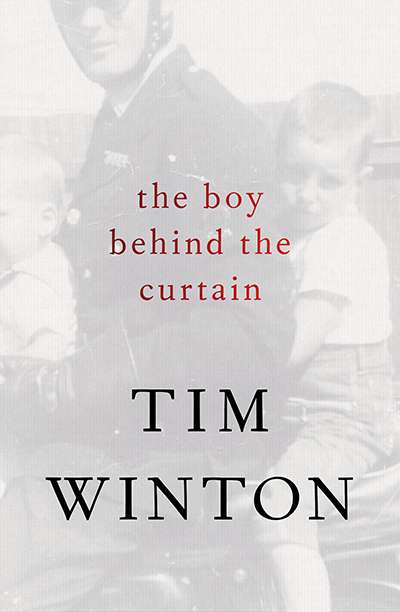 The Boy Behind the Curtain