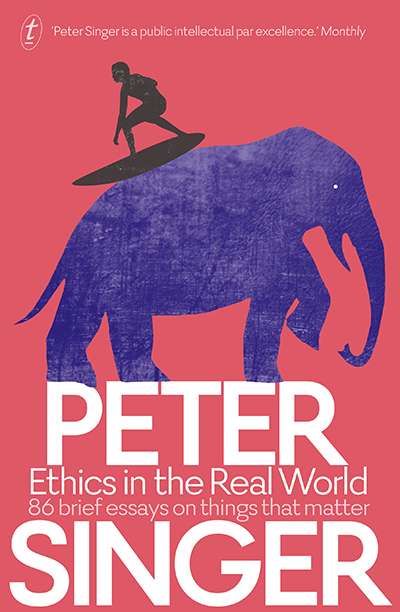 Ethics in the Real World: 86 brief essays on things that matter

In its original meaning, the word ‘philosopher’ simply meant ‘lover of wisdom’. At a time when theories of knowledge were still in their infancy, it was applied to thinkers – often, by the standards of the day, polymaths – who were able to turn the light of their intellects onto a vast range of fields: physics, chemistry, political science, ethics. A philosopher thus defined could not exist today, such is the dramatic specialisation of knowledge that has taken place since Socrates could credibly hold forth on topics as varied as democracy, theatre, astronomy, love, and epistemology.

Invited to nominate a contemporary equivalent of such a figure, many would consider Peter Singer. Since the publication in 1975 of the foundational Animal Liberation, Singer has established himself as both a leading exponent of utilitarian ethics and a reliably contentious public intellectual. In the introduction to his latest book, Ethics in the Real World, Singer describes the shifting ground of philosophy in the academy, its movement, under pressure from the student-led radicalism of the late 1960s and early 1970s, from a discipline concerned primarily with theory and semantics to one that could also encompass practical ethical questions. These students, of which Singer was one (at Melbourne University and then Oxford), demanded that their courses reflect the important issues of the day, prompting their lecturers to: ‘[recall] the example of Socrates questioning his fellow Athenians about the nature of justice, and what it takes to live justly, [summoning] up the courage to ask similar questions of their students, their fellow philosophers, and the wider public.’

Ethics in the Real World: 86 brief essays on things that matter