As we step out of the house,’ writes Virginia Woolf, in her 1927 essay ‘Street Haunting’, ‘we shed the self our friends know us by and become part of that vast republican army of anonymous trampers.’ Into the anonymous crowd Woolf would have us carry that androgynous mind she champions in A Room of One’s Own (1929), a mind that is ‘resonant and porous’, one that is free and ‘wide open’ much like the mind of the walker who, away from the house, becomes ‘a central oyster of perceptiveness, an enormous eye’.

For Lauren Elkin, too, walking the city is entwined with looking, subjectivity, and, ultimately, ‘the utter, total freedom unleashed from the act of putting one foot in front of the other’. As the book’s title suggests, Flâneuse: Women walk the city in Paris, New York, Tokyo, Venice and London presents the figure of the woman walker and seeks to ‘build [for her] a genealogy, or a sisterhood’. Elkin refutes those who have argued that the urban walker, or flâneur, is inherently male:

To suggest that there couldn’t be a female version of the flâneur is to limit the ways women have interacted with the city to the ways men have interacted with the city. We can talk about social mores and restrictions but we cannot rule out the fact that women were there; we must try to understand what walking in the city meant to them. Perhaps the answer is not to attempt to make women fit a masculine concept, but to redefine the concept itself.

Elkin sets out to do just that: to articulate a definition of the flâneuse that is independent of her male counterpart. Flâneuse takes the form of a series of portraits of women who walk – Jean Rhys, Virginia Woolf, George Sand, Sophie Calle, Mavis Gallant, Agnès Varda, Martha Gellhorn, and Elkin herself. These portraits are composed of biographical material, urban history, and close readings of the writing, artwork, and films of Elkin’s chosen flâneuses interspersed with her own experiences of reading these women and the cities they have walked. Via her engagement with their lives and works, Elkin establishes a definition of the flâneuse that incorporates the various forms of movement, trespass, and freedoms to be found by a woman at street level. For Elkin, the flâneuse ‘voyages out and goes where she’s not supposed to; she forces us to confront the ways in which words like home and belonging are used against women’.

It is with this emphasis upon home and belonging that we get to the heart of Elkin’s conception of the flâneuse, because each of these women is writing out of a species of exile. Rhys suffers ‘reverse exile’ and is cast adrift in her ‘foreignness’; Sand ‘refused to be placed’; Calle, lost, begins ‘following people to have something to do’; Gallant, a Canadian in Paris, is ‘a foreigner’; Varda perceives Paris through the eyes of a ‘provincial’, and the protagonist of her film Cléo de 5 à 7 (1962) ‘is out of place from the moment the film begins’; Gellhorn is ‘permanently home-building, permanently homeless’; Elkin, herself an American living in Paris, views London ‘with my outsider’s eyes’ and takes up residence (‘marooned’) in Tokyo’s ‘gaijin (foreigner) ghetto’; even Woolf, whom we have come to consider so at home in Bloomsbury, is at first ‘homesick’ for Kensington. And the remedy for homesickness, for being foreign, lost, out of place? Walking, which, helps to orient you, to come to know the city – any city – from the inside. 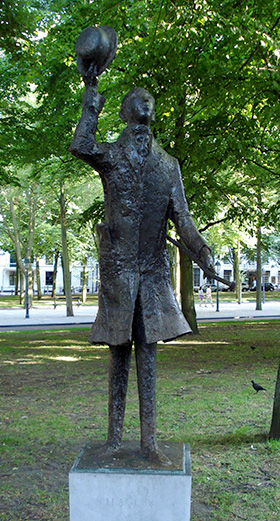 Flâneur by van Theo van der Nahmer at Lange Voorhout, The Hague (Wikimedia Commons)This is the great strength of Elkin’s book and her conception of a flâneuse who, by walking out her front door, by claiming her right to roam freely, effectively puts herself out of place, shedding, in Woolf’s words, ‘the self our friends know us by.’ The flâneur, according to Charles Baudelaire in his essay ‘The Painter of Modern Life’ (1863), ‘set[s] up house’ in the crowd. Elkin’s flâneuse rather abandons her house for the crowd: ‘as street haunters we become observing entities, de-sexed, un-gendered’. Out of her (private) place, the flâneuse makes the transition from ‘being “the object of the look” to “the subject who looks”’.

Elkin focuses on the empowering potential of the city streets, and ‘the liberating possibilities of a good walk’. There are glimpses of the gendered violence often associated with the street: Varda’s Cléo asks a female taxi driver, ‘you aren’t afraid at night?’; Woolf’s Rose Pargiter encounters a leering man (‘The enemy!’) on her first independent ‘prowl’; and the book’s epilogue examines Ruth Orkin’s 1951 photograph of Ninalee Craig, surrounded by wolfish men, on a street in Florence. However, these are brief diversions from the dominant narrative of liberation and independence. Ultimately, Cléo’s taxi driver is ‘not afraid of much’, Rose makes a game of her encounter, and Craig insists that Orkin’s photograph is ‘a symbol of a woman having an absolutely wonderful time!’ In this context the omission of, for instance, Rob Bliss’s 2014 video 10 Hours of Walking in NYC as a Woman, is surprising. But this is not to detract from the importance of Elkin’s study, or the pleasure to be gained from reading it. It is to be hoped that the genealogy of walking women Elkin has begun to build in this volume will grow and that flâneuses will continue to abandon the house for the anonymity of the restless street. 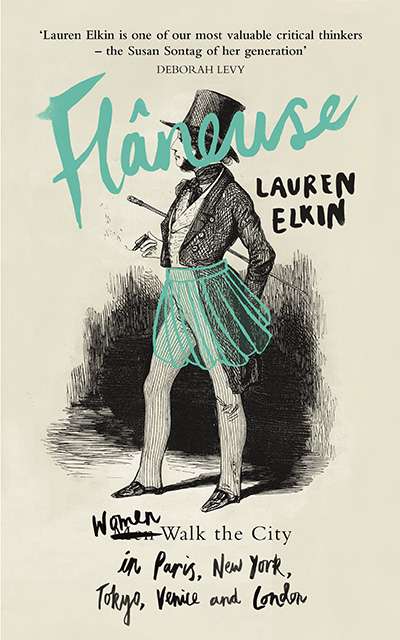