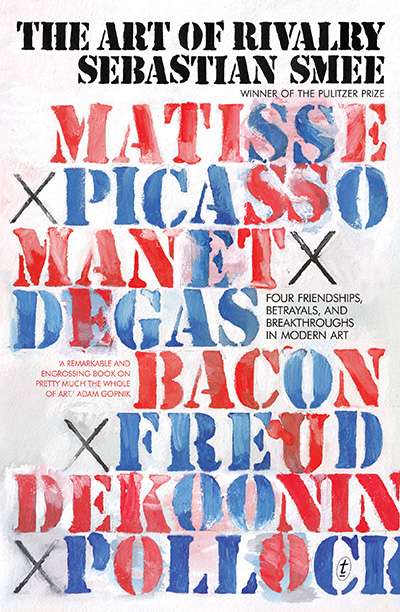 The Art of Rivalry: Four friendships, betrayals, and breakthroughs in modern art

It seems a particularly masculine take on the processes of art to examine the way rivalry spurs on creativity and conceptual development. Yet this is not the book the Boston Globe’s art critic, Sebastian Smee, has set out to write. ‘[The] idea of rivalry it presents is not the macho cliché of sworn enemies, bitter competitors, and stubborn grudge-holders slugging it out for artistic and worldly supremacy,’ he writes in his introduction to The Art of Rivalry. ‘Instead, it is a book about yielding, intimacy, and openness to influence.’

Smee has nonetheless chosen some pretty macho subjects among the four pairs he considers: Lucian Freud and Francis Bacon; Édouard Manet and Edgar Degas; Henri Matisse and Pablo Picasso; Jackson Pollock and Willem de Kooning. So sensational were some aspects of their lives – including priapism, suppressed homosexuality, masochism and sadism, glorified paedophilia, alcoholism, mental illness, narcissism, intense personal and professional jealousies, and more that Smee’s text veers towards tabloid in content. So fine are his writing and his critical perceptions, however, that his book is an important one. General readers will certainly find it fascinating, and art historians too might find priceless new nuggets in it.

The Art of Rivalry: Four friendships, betrayals, and breakthroughs in modern art