Jack & Mollie (& Her) by Jordie Albiston

Although William Carlos Williams, with some accuracy, claimed that ‘every’ poem is an ‘experiment’, the number of successful experiments is relatively rare. Jordie Albiston’s new ‘long poem’ or ‘verse novel’ (call it what you will) is triumphantly experimental in both technique and content.

In technique, Albiston has done several things which, in other hands, would almost certainly have not turned out well. The whole book is written in syllabic rather than accentual verse, a metre used with mixed success last century, by Marianne Moore (1887–1972) and a few others. Albiston here has deliberately flirted with the pentameter by ensuring every line across her 136 pages has exactly ten syllables. Her ‘free verse’ rather than iambic lines are arranged (as if by a related algorithm) into five-line stanzas. The result is unexpectedly convincing and agreeable to read.

An even less predictable success is the highly effective diction and syntax Albiston has invented for the interior monologues of her two canine protagonists, Jack and Mollie. We sense the precedent of Les Murray’s ‘The Cows on Killing Day’ (and perhaps James Joyce’s later novels), but Albiston’s solution to ‘voicing her dogs’ is entirely her own.

Despite our also being animals, we humans are warned these days against anthropomorphism. Albiston is in no doubt as to what her two ‘pooches’ are thinking – and neither are we readers after being given such privileged access. Take these lines from Jack, for instance, as he faces euthanasia near the end of the book:

Mollie, on the other hand, is bigger, younger, and less academic (and, dare one say it, very female). A few lines from her are a different thing altogether:

yip! o yip! i love being here i love being
here with jackie boy & her & him i
just love everything everywhere cos this
is the life! there’s so much to smell & see
& explore & do & i love getting . . .

Most of the text, however, consists of an equally compelling past-tense third-person narration (occasionally addressed to a ‘Dear Reader’) in which the vulnerable ‘ownee’ rather than ‘owner’ of the two dogs is referred to throughout as ‘J’. This provides a distancing which nicely undercuts what might otherwise have been sentimental (especially for those readers not especially devoted to dogs). Such distancing also gives the author’s recurrent struggles with depression an extra poignancy. The dogs’ sensitive awareness of these difficulties is, in turn, even more moving, as is the juxtaposition between Jack’s mode of ‘speaking’ and J’s. This is well suggested near the story’s beginning where the author writes:

... she was somewhat
alone & she simply wanted something

to love ... and then the light
switched on & her heart was lit & she saw
it up there the Dog Star she is not with

the very well when she comes to pick me
up she holds me too squash even with the
worry-worry I do the sad & bold
goodbye to mother brother gather my
self for what next ...

Jack & Mollie (& Her) is, at its core, a specific study of canine-human psychological interdependence, as it has developed over millennia. It also possesses a considerable, though not particularly remarkable, narrative. The dogs, especially Jack, get into various scrapes and misadventures, and, maybe ironically (since this is an Australian story after all), they and their ‘ownee’ also experience (rather disturbingly) a flood and a bushfire. The friends and family of J are deliberately somewhat remote from the central figure whose loneliness is being offset, even ‘cured’, by Jack and Mollie. The ending is inevitably a little ‘bitter sweet’. I don't intend to spoil it, other than to warn that if you finish this book in a café you may well be embarrassed by tears. 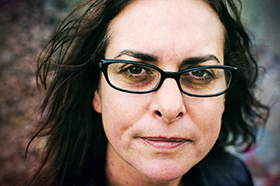 Jordie AlbistonA further important dimension of Jack & Mollie (& Her) is the insight it offers into clinical depression, the way the disease seems to appear and disappear without explanation (though some factors such as marriage break-up and job losses can be partly suspected). J’s two dogs are rightly fearful of this top canine, referring to him by various names such as ‘Boss Dog’ or ‘mister bossy boots’. J handles her diagnosis in various ways and with differing degrees of success, including, as Jack notes, ‘doing the go-round / in the no-light’. Like the dogs, the reader is also nervously alert for the Boss Dog’s reappearance. Much has been written about this particular mental illness, but it is hard to imagine anything more effective in dismissing simplistic notions about how the afflicted should just ‘get a grip’ and ‘pull herself (or himself) together’. As the dogs know, it’s never that simple.

It’s saddening to think there may be potential readers ready to dismiss Jack & Mollie (& Her) as ‘merely’ a strangely written account of a depressed female poet’s ventriloquial relationship with her two pooches. These readers couldn’t be more wrong. This is a book about important issues, and this reviewer would not be surprised to see the book taken up and enjoyed well beyond the confines of those already familiar with the earlier, but rather different, achievements of this major Australian poet. 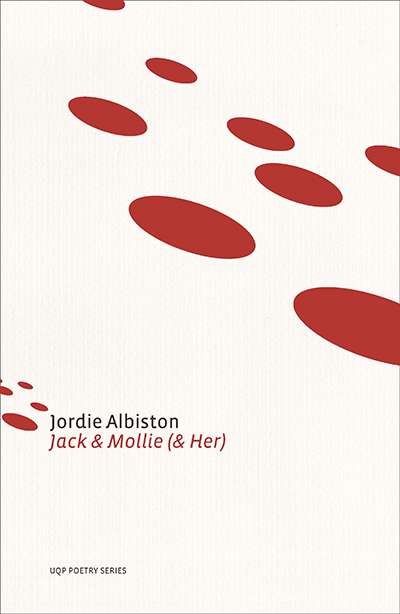