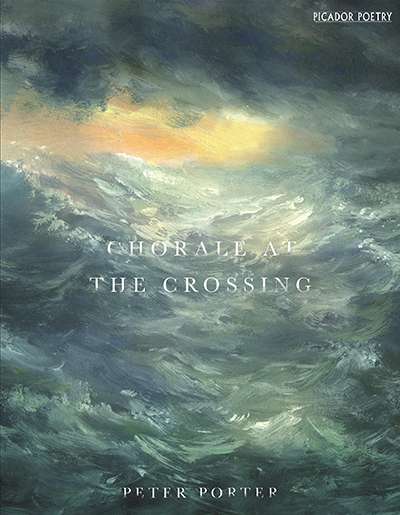 Chorale at the Crossing

by by Peter Porter

Peter Porter's posthumous collection of poems, Chorale at the Crossing, is preoccupied, understandably, with death – but death was a central preoccupation of his work from the beginning. How could it not be? He lost his mother at the age of nine.

Porter's two Collected Poems (1983 and 1999) were – are – stupendous, exuberant treasure-houses of riches, but death is the dark stitching. Death and sex – two stitchings. No three: death, sex, and cats. Four: death, sex, cats, and European High Art. And since this list is beginning to sound like Eric Idle in the Spanish Inquisition, I might round it out: death, sex, cats, and Pythonesqe humour. Porter was a very funny writer – as an irreverent satirist and aphorist, certainly, but also as an absurdist. There are jokes curled through even his most cryptic poems.

Chorale at the Crossing

by by Peter Porter