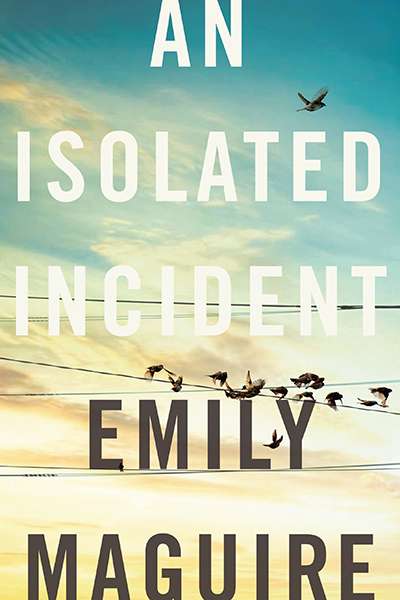 Emily Maguire's An Isolated Incident explores the media's fascination with beautiful, murdered women. The novel also interrogates the experiences of those who find themselves involved in murder cases.

The novel is set in Strathdee, a fictitious rural Australian town. This 'lovely little' hamlet has been unsettled by the slaying of Bella Michaels, a 'photogenic' young resident. Bella's older sister, Chris, finds herself in a particularly nightmarish situation. She must deal not only with her own grief, but also the hostility of the local police force. This hostility is due in no small part to the fact that Chris dabbles in sex work.  An Isolated Incident cuts between Chris's travails and the media reportage of her sister's murder. This reportage is produced by May Norman, a small-time crime journalist whose career ambitions take a back seat to her obsession with the case.

Maguire's novel merges feminist media analysis with fictional narrative. This merger is confident, save for a few overly polemical passages, for example: 'Homicide investigations ... open up private lives in an unprecedented way.' Chris's raw emotions and salty language are effectively juxtaposed with May's trite, tabloidesque accounts of Bella's death. Much of the novel focuses on May's escalating obsession with the murder. This obsession is convincingly and sensitively depicted. The transcripts of her interviews with Strathdee locals reveal an earnest but naïve individual who has failed to grasp the human dimensions of Bella's death.

The only real problem with An Isolated Incident concerns Maguire's failure to adequately draw out the implications of the title. Femicide cases are often framed as isolated bursts of misogynist violence in an otherwise peaceful society. (Think, for example, of the media coverage surrounding the 2012 death of Jill Meagher.) Otherwise, this is a taut and timely text.