Eyelets of cosmos, anaemic stars, only gazing in words. That parrot
bush called budjan with its supernova of stamens, spurious and sacral
Initiate of glinting conversation with long-beaked cockatoo and bee

Hunger is the dugite resigned to regurgitating a blue tongued lizard
Its shingle back unpierced as it swings away, reefing its legs past a dead
raven unsettled by maggots, used condoms, me taking a photo

A man searching the swamp for a hook-up on Grindr scans my hand
for a phone, his vulnerability touching as he passes soundlessly
Keens into the whiteness of paperbark trunks and anonymity

I've been walking, barely felt Prickly Moses exposing flecks of blood
to garnet on my arms in the heat, which kindles this wildness in me
I can't name and meet each time as a stranger, forfeited to sleep

My suitcase yawning at the foot of his bed, him spilling cunning lines across
new sheets as the mirror trembles with a passing train. I know the shame
of wanting him to call me, before distrust stakes its claim on memory

There are worse things than fire. Thriving, a tingle tree, heartwood burnt out
centuries ago, shelters a school tour from a deluge in its still-black bethel
One girl lingering, is moved on by a teacher yelling that she won't drown

How it all turns in and swallows, thinking in unison as everything is
knotted, from trees to throats. Swelling panicle of micro orchid trodden
down to mandibles of ants, their mass smothering a flinch of baby bird

Scudding dragonfly plucked from the wind by dazzle of bee-eater, knows
catastrophe. Congested telepathy of letters nesting on my desk, a ruin
of truth, part flight, breezing devotion through an open door

Here with my son, mantising gooseberries to our mouths in undergrowth
A thrall of silvereyes quicken the fig as a neighbour spits words at her dog
Galahs shear sunflowers above us. Before it rains, I'm burying the seeds

Djirritch Djirritch
the black and white
willy wagtail
fate's messenger
did not tell me you'd gone
but your cousin phoned.

Kids walking to school
found you
flat on your back
on the pavement frost
eyes open
looking for that emu in the Milky Way
but the coroner saw
no evidence of foul play.

I saw you leave
the Dimboola Hotel at closing time
with half a slab
the doctor warned against
with your clapped out guts
at only half three score and ten
but your missus wouldn't let you see your son
what else was there to do.

They haven't taken down the pictures
plastered on your bedroom walls
of Elle Macpherson smiling down
over and over again
and no one will stay there for a while
but you pissed yourself laughing
when the skies opened on your funeral
in the middle of the worst drought
in a century.

I remember you skinny and shy
beanie, five days growth and
'fuck you' painted on the uppers of your boots
taking me up the river
to show me the Bullitch
bent over with age
with the footholes
chopped out by your great uncles
climbing high for honey
and on the other side
the scar from where they'd peeled off a canoe.

No foul play?
What about the feller
shot by the Namatji squatter
not far from where they built the mission church?
What about Dick-a-Dick
left in Sydney to walk home
after the first real Ashes tour?
What about Uncle Nyuk
run down in his horse and cart
by the publican drunk and driving home?
What about Vicky and Bubbles
farmed out to Namatji families
who tried and failed to make them white?
What about the bosses in Canberra now
whose law won't recognise
your lore along the river?

Your bag of bones rots in a cheap coffin
in Dimboola cemetery
while you roam around Lake Wirregrin
waiting for it to fill again
for the Beal to blossom and seed
and for the black and white cockatoos
to fly the same way.

1.
insert here: dark joke about sharks (keep swimming or they die)
cruising around the apartment    something always in her hand
movement
from here to there, returning:      every wayward thing
needing her to find its home

~
idle, idle, wedge-edge of panic     polishing itself
she is easy to dismiss, is difficult, elegant

too, demanding, too
much

in the house
of self, she is the sleeper
cell, rogue

all the edges singing

all the clean all the blade, only the everything there, and not
the not-

2.
o darling see this bed I have made you,
so white

3.
what she was, under that tree, stack of books
at hand, was lonely (sole, not tragic, still:)
only, clear gone, tumbling
into pages

5.
and meanwhile, back to the cells, doing their job
perhaps a bit too well: look at them shine, O –

6.
because she read Plato at a tender age
because it feels like fixing
because if she does what they expect they will leave her alone
because the right slant of light
because something to push against

some pure beauty some glacier singing

7.
literally, no metaphorically, no literally

than what? then
what? Some slip

past the bracket-gates, then –
what? 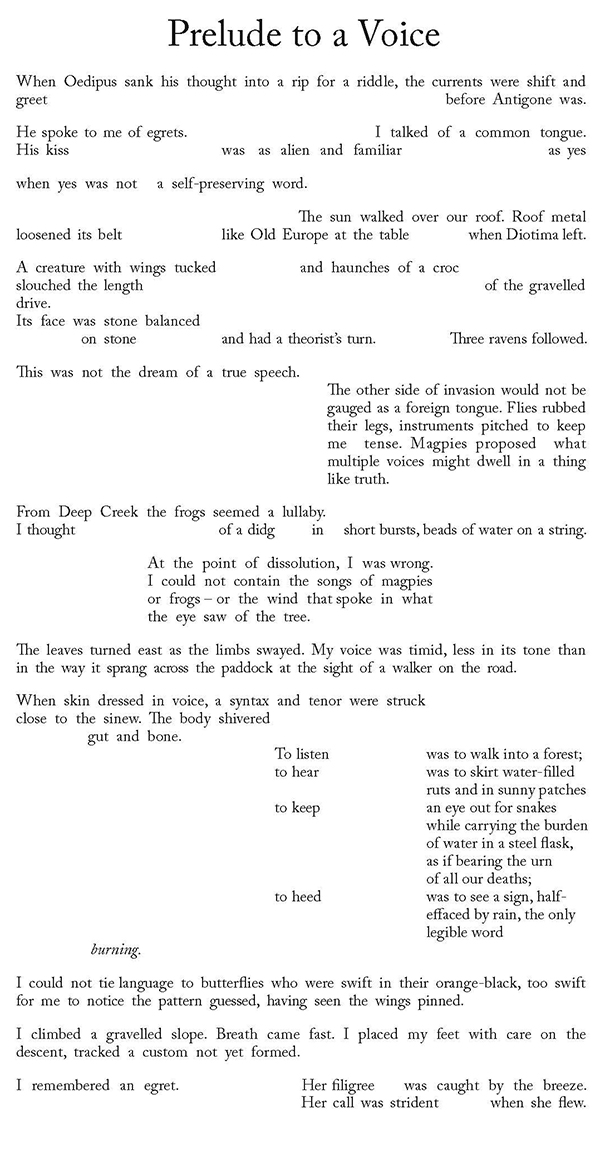