How fortunate was Rudolph Johann Joseph Rainer, Archduke of Austria. In his short life (he died at forty-three), he enjoyed the privileges of empire and the high positions that accrued to his noble state – including the ecclesiastical roles of cardinal and archbishop. Yet we would hardly remember Rudolph had he not been also the chosen pupil of Beethoven, and patron and dedicatee of Beethoven's Archduke Trio, the Emperor Concerto and the Missa Solemnis.

It is easy to love both the Trio and Concerto. Their melodies beguile and haunt; they ask for virtuosity, not a miracle, from the musicians who perform them. But the great solemn Mass in D major, Beethoven's second setting of the liturgy (after the more conventional Mass in C major), is another creature entirely. Little wonder conductor Andrew Davis has waited until his eighth decade to assemble its huge vocal and instrumental resources and bring it to an audience. But how triumphantly he has done so! The recent performance with the Melbourne Symphony Orchestra and Chorus and four splendid soloists was a revelation, paying full homage to the soaring drama of Beethoven's exploration of belief, transcendence, divinity, and the place of humankind in the scheme of things.

It was also testament to the power of live performance. All around me in the stalls people held their breath during the sombre pauses of the Credo's 'passus et sepultus est' (he suffered and was buried) and then reeled at the choral lightning bolt of 'Et resurrexit tertia die' (and rose again on the third day). The Mass is a work of such scope and stretch in its orchestral and vocal scoring, and such a departure from expected decorums of liturgical setting, that it is hard to fathom and almost impossible to appreciate fully from recordings. So to see it live (the last MSO performance was in 1971), to see Maestro Davis coaxing instrumental precision with his furling fingers, and to observe the way soprano and mezzo leaned toward one another as they navigated the interlaced passages of the Agnus Dei, was to experience exaltation of a very particular kind. Not catharsis. Not delight. Something closer to an intimation of the sublime. Beethoven takes one to the brink of a precipice. He is exhilarating and daunting. I had some sympathy with the comment made by Ronald Vermeulen, the MSO's Director of Artistic Planning, during his pre-concert talk: 'This is some of the most incomprehensible music ever written.' But Vermeulen, deftly ironic, was issuing an invitation, not a warning. And his succeeding remarks were an extrapolation from Beethoven's inscription on the copy of the Missa presented to Archduke Rudolph: 'Von Herzen – Möge es wieder – Zu Herzen gehen' (From the heart may it return to the heart'), suggesting a profound sincerity, if not a simplicity, in Beethoven's intent. 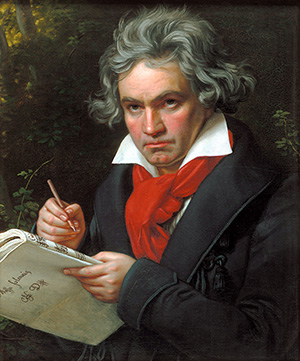 Portrait of Ludwig van Beethoven composing Missa Solemnis (1820), by Joseph Karl Stieler (1781–1858) (Wikimedia Commons)The Missa Solemnis has puzzled, challenged, extended, and exhausted its performers and critics ever since it was first performed (oddly, in St Petersburg) in 1824, years too late (Beethoven revised it, obsessively) for its intended occasion, the installation of Rudolph as Archbishop of Ollmütz in 1820. Beethoven, already afflicted with the deafness that would torment him, experienced a truncated version – the Kyrie, Credo, and Agnus Dei – in Vienna later in 1824. Austrian Catholic Church authorities forbade the use of the Latin for the secular performance, so the Mass parts were translated into German. The performance is variously reported as triumphant and a complete botch.

But translation into German tells us about more than clerical strictures. Beethoven, while composing the Missa, had the Latin (and the Greek Kyrie) texts translated into German for himself, the better to align his orchestral and vocal resources to his understanding (and emphasis) of the texts. In the MSO performance, those emphases – for example on 'miserere nobis' (have mercy on us) and 'Benedictus qui venit in nomine Domini' (Blessed is he who comes in the name of the Lord) – give us some inkling of what Beethoven believed and which words of the liturgy resonated most for him. Listening to the sublime Benedictus, I kept wondering about the way those words might be interpreted today. 'Blessed is he who come in the name of the Lord.' The music suggests a benign, guiding presence, amplified in the glorious serenity of the violin solo (beautifully executed by MSO Concertmaster Dale Barltrop). But I don't want to speculate about Beethoven's theology (too many have – and chastised him for it, or the lack of it). In music he was profoundly unorthodox, but at the same time drew on all that had gone before him. His setting of the liturgy of Mass is extraordinary, soaking up plainchant, Palestrina, Haydn, and Mozart, but is also unorthodox – seeming to instantiate the glory of a divinity and the necessity of belief (the pounding fugal 'Credo, credo'), while skittering over the tenets of belief in a choral rush. And for all the high Hosannas and the worlds without end of the alliterative 'Vitam venturi saeculi' fugue, there is an overwhelmingly earthed, incarnated sense of human yearning – for mercy and for peace, but also for something more – in the Missa. I don't have words for the something more. But Beethoven gives it to us in the untranslatable language of his music.

Certainly, anyone who has sung or played the work knows how trying it is, how it tests the limits of the human body. So the MSO performance was all the more admirable for seeming so beautifully achieved. I won't say effortless. It couldn't be, given what Beethoven (never a performer's friend) demands. Effort is the warp of its fabric. Tania Jacobs, soprano in the chorus, puts the paradoxical ordeal of the Missa this way: 'It's a brute of a piece, and I've loved getting to know it.' There must be endorphins at play here, as at any marathon, for Jacobs conveys exactly what the audience could see manifest in the MSO Chorus – an indefatigable verve (from all singers) even as the sopranos held on, and on, to the Gloria's forte high A and the Credo's fortissimo high B flat.

For a work and a performance so markedly orchestral (with great Beethovian pastoral sweeps), Davis's Missa, from the opening bars of the Kyrie, nonetheless proved a perfect vehicle for the four soloists as well as for the massed choral and instrumental forces. (Listen to the many recordings: it isn't always so.) Again, live performance, with the visual and the kinetic in play as well as the aural, was crucial here. The ensemble of the four – soprano Emily Birsan, mezzo Michèle Losier, tenor Andrew Staples, and bass-baritone Christian Van Horn – was exemplary, and their solo passages eloquent – and audible. It was a rare privilege to hear all soloists, but I shall never forget the poignancy of Michèle Losier's penetrating solo passages in the Agnus Dei, or the limber power and sensitivity of Emily Birsan's soprano as it lofted over the walls of sound from chorus and orchestra. The four soloists' performances were astonishingly sustained – equal to the accelerating rigours as the Missa moves into the intensity of the B minor adagio of the Agnus Dei and on to compete with the instrumental incursions of sounds of war. We might wonder whether the sudden drums and trumpets that invade this song for mercy and rest are Beethoven's way of conjuring his own conflict-ravaged world: when Vienna was bombarded by Napoleon's forces in 1809, Beethoven sought refuge in his brother's basement, shielding his already vulnerable hearing by clamping a pillow over his ears. But whatever Beethoven's immediate reason for introducing the martial riffs, we hear them now as part of our own experience. Timeless and dreadful. So the Missa does not end in the cadences of peace, and nor do we ask that it should. 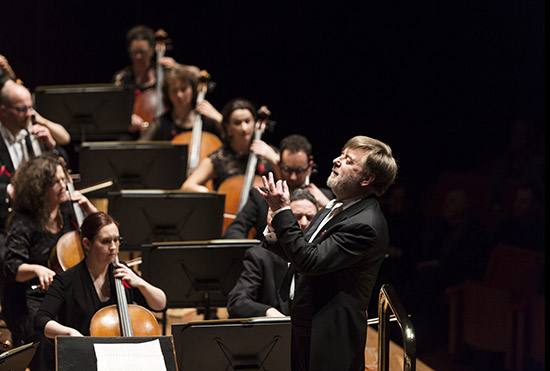 No cathedral is likely now to mount a performance of the Missa Solemnis as an integral part of its regular religious liturgy. It is – always has been – too large in conception, too demanding of resources. Too Beethoven. But like Britten's great War Requiem (which Davis also conducted for the MSO in 2015), the work creates its own spiritual domain in performance, hallowing and questioning simultaneously.

Beethoven himself never heard his great Missa, except in his unfathomable head. We are the blessed beneficiaries of his tumultuous musical invention. But once every forty-five years is not often enough for such a profound experience.