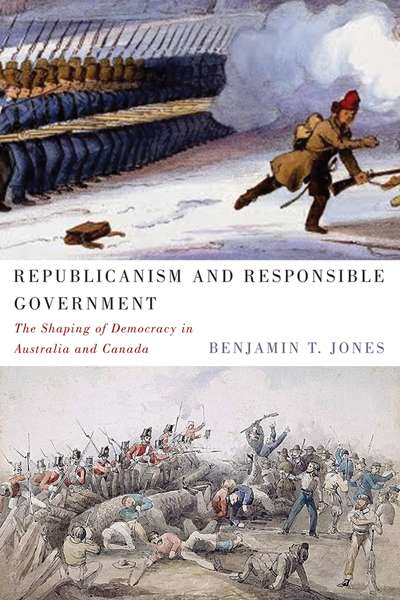 Republicanism and Responsible Government: The Shaping of Democracy in Australia and Canada

Studies in the early history of Australian democracy have undergone a remarkable regeneration over the past decade. Since New South Wales's sesquicentenary of responsible government in 2006, books by Peter Cochrane and Terry Irving, and essays by Paul Pickering, Andrew Messner, and Sean Scalmer, have overhauled prevailing interpretations of the 1840s and 1850s, which took colonial democracy to be a formality delivered by external factors, and emphasised the local impetus to this achievement. The energy of popular movements has been brought to life, while attention to the intellectual influences of popular constitutionalism and Chartism has illuminated a period of immense political creativity.

Benjamin T. Jones's début monograph, Republicanism and Responsible Government, continues this revision process. He adds two important perspectives to the story. First, colonial Australia's democratic experience, he contends, is better understood by emphasising a common political culture that was shared with colonial Canada. Second, in describing that common culture a new protagonist is introduced – 'civic-republicanism'. Jones's central thesis is that historians have over-emphasised the influence of liberalism and ideas of individual rights in explaining the formation of Canadian and Australian democratic institutions. Instead, he argues, collectivism, civic virtue, and duty, aversion to corruption and promoting the common good – ideals associated with the creed of 'civic-republicanism' – played an equal if not greater role.

Republicanism and Responsible Government: The Shaping of Democracy in Australia and Canada