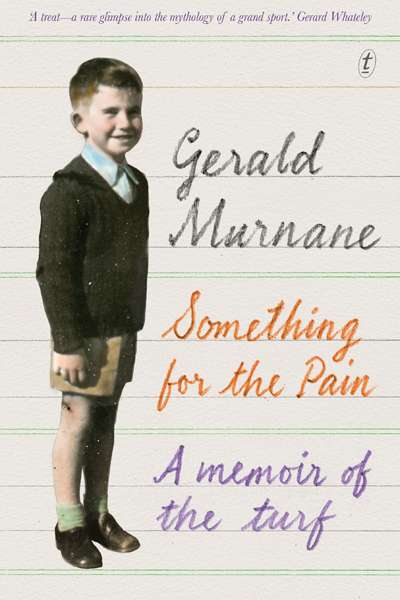 Narrators in Gerald Murnane’s novels and stories have occasionally scorned autobiography. Near the beginning of A Million Windows (2014), for example, we find: ‘Today, I understand that so-called autobiography is only one of the least worthy varieties of fiction extant.’ Murnane is even more direct in Philip Tyndall’s 1990 documentary Words and Silk, which explores the author’s fictional relationship with horseracing. There he declares, direct to camera: ‘I hate the word autobiographical.’

There is a great deal of autobiographical material in Murnane’s fiction, but it is typically displaced onto fictional ‘personages’, as Murnane calls them. Some readers may be surprised, then, to discover that Something for the Pain: A Memoir of the Turf is directly autobiographical. It features numerous stories, recollections, and anecdotes – all connected to horse racing in some way – and has as much in common with barstool yarns as the fiction and non-fiction Murnane has published to date.

Murnane’s first experiences of the races were, he says, aural. When listening to broadcasts of race calls from his family’s backyard in Bendigo as a child, Murnane heard ‘not distinctive words but vocal sounds: a chant or a recitative that began quietly, progressed evenly, rose to a climax, and then subsided again’. We can trace the unusual syntax of Murnane’s sentences to these early experiences. His first novel, Tamarisk Row (1974), concludes with a race call, and most of its sections are fashioned with long, grammatically correct sentences, which progress evenly at first, then gain pace and complexity before rising to a climax. These sentence patterns are repeated in Murnane’s subsequent fiction, with varying frequency and intensity.