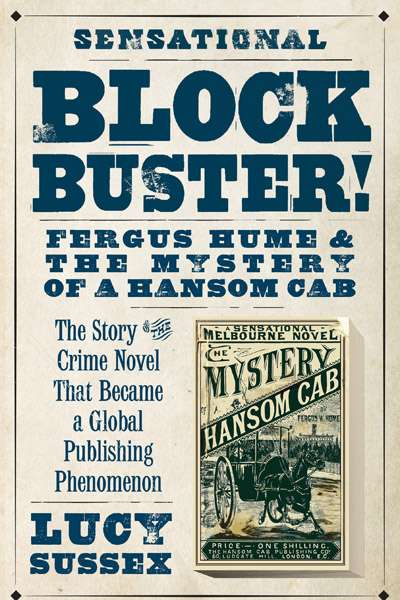 Blockbuster: Fergus Hume and the Mystery of a Hansom Cab

In Blockbuster! Lucy Sussex deftly relates the story of Fergus Hume and his great Melbourne detective novel, The Mystery of a Hansom Cab. First published in 1886, it has never been out of print and has been translated into many languages and adapted for the theatre. There have been three silent film treatments (all sadly lost), and also an ABC telemovie. Yet despite its fame and longevity, the story of its writing, publication, and the life of the author have all been something of a mystery. Sussex’s background makes her an ideal candidate to try and solve these puzzles. Like Hume, she was raised in New Zealand before moving to Melbourne, is the discoverer of the first Australian detective writer, Mary Fortune, has edited anthologies of crime writing, and is a published novelist and short story writer.

Fergus William Hume was born in England in 1859, the son of a manager of a lunatic asylum who moved his family to Dunedin in New Zealand in 1862 to take up a similar position. Hume studied law at the University of Otago, worked as a law clerk, and qualified as a solicitor. He had a strong ambition to be a dramatist and cultivated the image of a dandy and a flâneur: the picture of him on the back cover of Blockbuster! shows him with a bow tie, a flower in his lapel, pocket handkerchief, and sporting a waxed handlebar moustache.

In 1885 Hume crossed the Tasman to Marvellous Melbourne with the aim of furthering his theatrical career. Despite his best efforts, he could not get beyond the fringes of the competitive Melbourne theatrical world. Although he mixed with the right people and wrote for the weekly Table Talk, no one showed any real interest in his plays. But he did have success with his novel about a night-time murder in a hansom cab travelling down St Kilda Road.

Blockbuster: Fergus Hume and the Mystery of a Hansom Cab