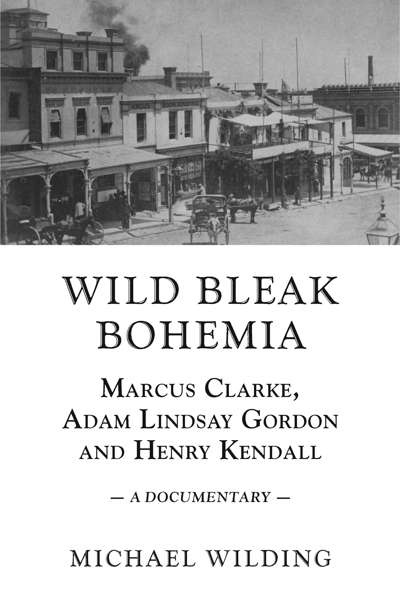 ‘The mind retires from such speculation, unsatisfied but impressed’

Joseph Furphy, Such is Life

Michael Wilding’s biographical study traces in minute detail the interwoven lives of Adam Lindsay Gordon, Marcus Clarke, and Henry Kendall as their destinies converged on Melbourne and the Yorick Club from 1868. The Yorick started its life as a club for literary men, although this term came to be interpreted loosely. The book charts the trajectories that led to the conjunction of the three men, and does not neglect the individuals they encounter along the way. As a study of important colonial writers and their community, at a particularly productive period in their separate and interconnecting lives, it is a valuable record.

Marcus Clarke and Adam Lindsay Gordon were of upper-middle-class British stock; both had emigrated. The book follows Gordon’s intermittently kindled hopes of inheriting the family estate in Scotland through entail. Marcus Clarke had already inherited some capital, but spent much of his patrimony on failed land deals, newspaper proprietorships, and other disappointing investments. Henry Kendall was of humbler but respectable Australian-born stock. One of the many things the three literary men had in common, along with their writing talents and love of literature, was a great and growing want of money. On the periphery of the narrative are their long-suffering wives. Clarke and Gordon married beneath them, in class terms, but also managed to marry forbearing women. If you are going to be short of money and flighty, it is probably best to choose a woman used to work and with lower expectations. Clarke’s actress wife, Marian Dunn, appears to have been very tolerant for some time (although she was having second thoughts by 1871). Gordon’s Maggie was an expert horsewoman, and shared at least one of his key interests. Kendall’s wife, although not socially ‘beneath’ him, at least initially had a high threshold for waiting around for the housekeeping money to be borrowed, although ultimately her limit was reached. Women are incidental to this narrative, however. The community that Wilding carefully traces is a male community, which operated through and around the primarily male spaces of Melbourne’s clubs, cafés, theatres, bars, hotels, racetracks, and newspaper offices.

Susan K. Martin is Professor in English and Associate Pro Vice-Chancellor (Research) for the College of Arts, Social Science and Commerce at La Trobe University. She teaches Australian studies and Victorian literature, and publishes on nineteenth- and twentieth-century Australian literature and culture. Her books include Reading the Garden: the Settlement of Australia with Katie Holmes and Kylie Mirmohamadi (MUP, 2008), Colonial Dickens (ASP, 2012), and Sensational Melbourne (ASP, 2011), both with Kylie Mirmohamadi.

Susan K. Martin is Professor in English and Associate Pro Vice-Chancellor (Research) for the College of Arts, Social Science and Commerce at La Trobe University. She teaches Australian studies and Victorian literature, and publishes on nineteenth- and twentieth-century Australian literature and culture. Her books include Reading the Garden: the Settlement of Australia with Katie Holmes and Kylie Mirmohamadi (MUP, 2008), Colonial Dickens (ASP, 2012), and Sensational Melbourne (ASP, 2011), both with Kylie Mirmohamadi.