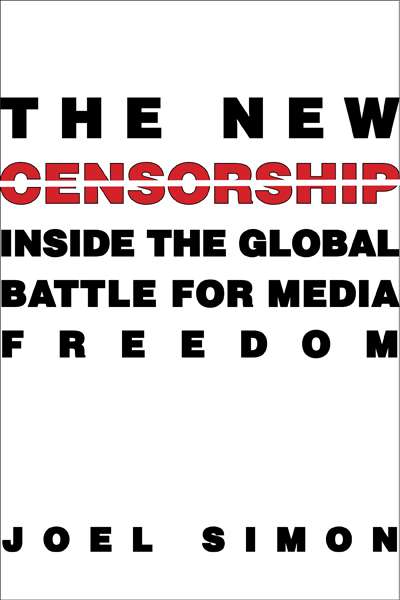 Joel Simon has had more friends murdered than I have friends.Such is the burden of the executive director of the Committee to Protect Journalists, an organisation that promotes press freedom worldwide. As recent events painfully illustrate, journalism can be a dangerous vocation. ‘Murder, after all,’ Simon writes, ‘is the ultimate form of censorship.’

The New Censorship catalogues the harassment, imprisonment, and violence borne by journalists around the world in a seemingly endless battle for control of ideas. Simon takes us from Pakistan, to the Philippines, to Putin’s Russia. He is a journalist by trade, and in large part this book reads accordingly: like a horrific collage of editorial coverage of the murder of colleagues. The method is appropriate. The anecdotes form a persuasive platform from which to sell the cause of press freedom.

The book was written between 2011 and 2013. I am not sure whether this is perfect or tragic timing. In the year or so since, many of the core issues that it addresses have magnified in importance and gained a new prominence in the public consciousness. Take the critique of what Simon terms the ‘democratators’: a generation of popularly elected autocrats. Putin is taken to task for meagre government responses to the murder of journalists. The justice that did come is characterised as ‘nothing more than a crude political calculation’. Recently, we have seen more crude calculation in the annexation of Crimea and the invasion of Ukraine. When MH17 was shot down, the international community struggled to get access to the crash site. While Russian-backed media obfuscated, Putin denied his country’s responsibility, and nearly copped a shirt-fronting. Although Simon focuses on the position of journalists, the substance of his critique can be directed to the broader conduct of faux-democracies. Although Simon’s call to ‘expose the democratators’ is nothing new, it is timely.