The Most Dangerous Book: The battle for James Joyce’s Ulysses by Kevin Birmingham

Ulysses was the first novel to become a celebrity in the mass media age. Its reputation was ‘enhanced’ by its alleged scurrility, its banning in the Anglophone world in both serial and book form, its having engendered legal proceedings centred on obscenity and copyright, and its notoriety as a wilfully difficult text. James Joyce wrote a novel that aspired to map its author’s home city – he claimed its success would be founded on the ability to reconstruct Dublin brick by brick from the novel, should the city cease to exist – and to ‘keep the professors busy for centuries’ (so far successful, one would have to say). George Bernard Shaw called it ‘a revolting record of a disgusting phase of civilization’, while many other writers and critics dissented, claiming Ulysses to be the wonder of the literary world, a work of genius elevated beyond the ephemera of provincial morals and pearl-clutching citizens’ committees. It encompassed a world in its pages, and created it anew. The novel re-imagined modernity, drawing myth and epic and tragedy into its field of vision, and provided readers with the means to see their lives in the same milieu as that of Leopold Bloom, Stephen Dedalus, Molly Bloom, Blazes Boylan, and all the rest. It changed everything.

Kevin Birmingham’s ‘biography’ of Ulysses scrupulously delineates the early conception of Joyce’s novel. It began as a draft story intended for Dubliners (1914), and subsequently evolved through a complex process of drafting, revision, and addition. Its tortuous path to publication also entailed a series of profound personal, pecuniary, legal, and logistical impediments. The tale is not lacking in pungent detail and high melodrama, and Birmingham exploits the full charge of his material to produce a story that is part thriller, part forensic procedural, and part historical panorama of literary experimentation, social change, legal precedent, and artistic gossip and patronage.

Readers of this biography are very likely to have read Ulysses or to be more than passingly familiar with it. There is plenty of entertaining and scandalous material extending well beyond the domain of the novel and its immediate zone of influence, but Ulysses and its author share centre stage. One might question, then, why Birmingham chose to frame his narrative as a kind of tabloid scandal. Many of the players in the story of Ulysses are given florid physical and characterological descriptions, as well as detailed motivational profiles. Several are typecast as saints or villains: there are generous doses of moral turpitude and legal tightrope walking, and their portraiture is governed by the telos of literary ambition and the legal framework of obscenity converging in the publication of the offending book. There are good reasons for the presence of some of this outsized material: Birmingham has written a trade book, with its attendant imperative to sell at an order of magnitude higher than that of the typical academic monograph. The book is also aimed squarely at the US market, with the heavy weighting of attention towards the US legal system and its prolonged agon with obscenity law suggested early on and intensifying as the drama unfolds.

Several women were instrumental in the composition and publication of Ulysses: Nora Barnacle, of course, but also Margaret Anderson and Jean Heap (editors of The Little Review, which first serialised Ulysses in the United States), Sylvia Beach (Joyce’s publisher and sponsor), and Harriet Shaw Weaver (Joyce’s longstanding patron and publisher of his Portrait of the Artist as a Young Man, 1916). Although Richard Ellmann is afforded only a single mention in over 400 pages of text, and is given a single entry in the bibliography, Birmingham assumes Joyce’s biographer’s anachronistic mode of reference by continuously citing the works and deeds of ‘Miss Weaver’. This is an odd sore thumb amidst an otherwise considered rebalancing of the gender ledger.

Due attention is given to Joyce’s male champions – his early discoverer in Ezra Pound (guilty of ‘sexism’, perhaps, but a ‘mediocre poet’? … no), his patron and legal counsel in New York in John Quinn, his publishers at Random House in Bennett Cerf and Donald Klopfer, his fearless legal counsel in the New York civil liberties lawyer Morris Ernst, and the enlightened (if effete and occasionally lush) arbiter Judge John Woolsey, who overturned the terms of the Hicklin Rule by which obscenity had been measured in the United States. Birmingham produces outsized portraits of his villains too: from the head of the New York Society for the Suppression of Vice (and special agent of the US Postal Service) Anthony Comstock, whose obsession with the distribution of corrupting material through the post saw the law prohibiting and severely punishing such activity given his name; to Comstock’s successor John Sumner, who prosecuted the Ulysses case against Random House in 1933; to the inveterate literary pirate Samuel Roth, whose corrupted text was, ironically, the basis for the subsequent Random House edition.

Birmingham’s book has been widely reviewed, as one might expect of a trade edition, and has received generous praise from such high-profile non-fiction writers as Matthew Pearl and Louis Menand. In this context one might forgive the book its florid character descriptions and projections of motive: both are common devices in the crime thriller and procedural genres. But Birmingham also receives abundant praise form the most scholarly quarters. Robert Spoo, once Professor of English at the University of Tulsa and editor of the James Joyce Quarterly, and now perhaps the most prominent expert in literary copyright law, singles out the author’s meticulous research for commendation.

The significant cache of reference material available on Birmingham’s website demonstrates the comprehensive research that has gone into the writing of this book. Any apparent superficiality (perhaps understandable on first sight) evaporates when reading the detailed support for many of the claims in the book: for example, one finds ample anatomical and epidemiological support for Birmingham’s theory that syphilis (Treponema pallidum) caused the lifelong iritis and glaucoma that so afflicted Joyce in the writing of his epic novel. This theory has an august heritage in Joyce studies, and Birmingham obliquely alludes to it as a lynchpin of his narrative from very early on. Birmingham also takes issue with his critics on his website, providing very detailed epidemiological and historical research to back his claims of Joyce’s affliction and the ‘atonement’ he perceives in the author’s sensibility (‘atonement’ is the last word Joyce was said to have emended before publication of the novel).

Amidst the monuments of scholarship and popular writing on Joyce and Ulysses, it is worth noting that Birmingham only tells half the story. Bruce Arnold’s trade volume, The Scandal of Ulysses, published in 1991 and substantially revised in 2004, provides a history of the novel’s tribulations into print, battles with copyright, and subsequent career between conflicting scholarly editions and stubborn editorial visions. The personalities embroiled in the novel’s ‘afterlife’ (as Arnold has it) are writ just as large – John Kidd and Hans Walter Gabler foremost among them – and provide legitimate cause to consider the novel as a kind of infernal scandal machine. Between Arnold and Birmingham, the story of Ulysses becomes public property, every bit as much as the monstrous and monumental novel.

Mark Byron is Senior Lecturer in Modern British and American Literature at the University of Sydney. He teaches and publishes across the genres and practices of Modernism: prose, poetry, drama, and film, as well as textual and editorial theory. His current work is in developing digital scholarly editions of complex Modernist texts and their manuscripts, including the Watt module of the Samuel Beckett Digital Manuscript Project. His work also deals with critical and theoretical reflection upon scholarly editing techniques. He has published on nineteenth-century and Modernist literature, and is the author of Ezra Pound's Eriugena (Bloomsbury, 2014). 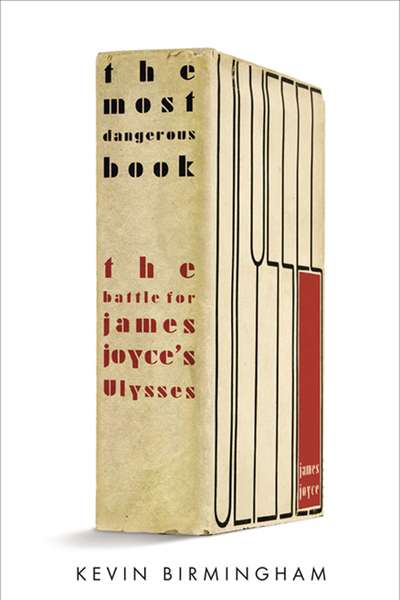 The Most Dangerous Book: The battle for James Joyce’s Ulysses