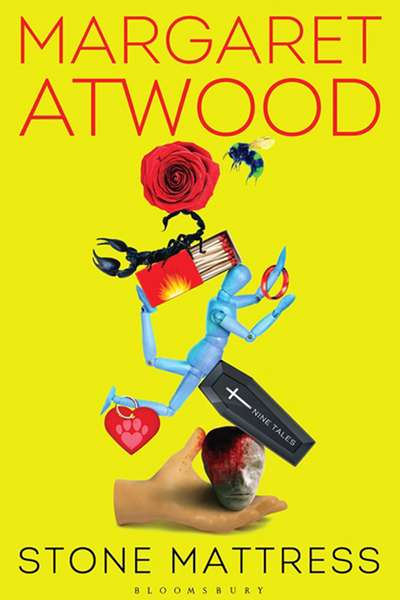 One swallow doesn’t make a summer, as the stark proverb cautions, but a cockatoo flocking of short stories suggests that the form is perhaps enjoying a revival – and the publishing industry has seized an opportunity. As it should.

In 2013, Alice Munro won the Nobel Prize for literature, lauded as ‘the master of the contemporary short story’. Edna O’Brien’s The Love Object appeared in 2013. New collections by luminaries Hilary Mantel (The Assassination of Margaret Thatcher) and Margaret Atwood have followed in 2014. And for aficionados of the form, there was the splendid brick (733 pages) of collected stories by the quirky American virtuoso of the form, Lydia Davis (do read her – she’s extraordinary), anticipating a trend when it was published by Picador in 2009.

Stone Mattress is subtitled Nine Tales – Atwood’s own choice (rather than ‘stories’) for her blend of diversion, exhilarating satire, and pretension-deflating folk savvy. These are tales for winter nights (Atwood’s Canadian landscape looms), mini-epics of condign punishment, vengeance, human venality, sexual savagery, moral perception, and astonishing, annealing kindness. Only a woman of Atwood’s uninhibited age, experience, and intelligence could have written them. And only a writer with Atwood’s sure moral compass could have carried them off. The tales conjure a world of ageless crone wisdom and contemporary dystopia – a Coen Brothers Fargo-like universe narrated by a Sybil. But a Sybil who can do lyrical, lyrical-satirical, satirical-lacerating, cyber-fluent, noir-absurdist, and redemptive-reconciliatory. Greek chorus and Sacha Baron Cohen.

‘Alphinland’, the first of three subtly linked tales, has a bravura opening that makes one believe Alice Munro when she writes that Atwood ‘takes my breath away’:

The freezing rain sifts down, handfuls of shining rice thrown by some unseen celebrant. Wherever it hits, it crystallizes into a granulated coating of ice. Under the streetlights it looks so beautiful: like fairy silver, thinks Constance. But then, she would think that; she’s far too prone to enchantment. The beauty is an illusion, and also a warning: there’s a dark side to beauty, as with poisonous butterflies.

Constance writes lucrative fantasy fiction, with characters who rejoice in names like Milzreth of the Red Hand, and the Scarlet Sorceress of Ruptous. She would think ‘fairy silver’. But so would Atwood, her ventriloquising, satirising creator, who both is and isn’t Constance. Handy-dandy, who’s the narrator and who’s the character here, when Constance (characteristically) fails to lay in salt to render her icy sidewalk safe: ‘It’s a lifelong failing: she has never been prepared’ (opines the narrator). ‘But how can you have a sense of wonder if you’re prepared for everything? Prepared for the sunset. Prepared for the moonrise. Prepared for the ice storm. What a flat existence that would be.’

Constance, four days widowed, is a perfect receptacle for Atwood’s promiscuous sympathies. She also affords her opportunity to skewer, hilariously, the academic industry that feeds off genre fiction. A later tale, ‘The Dead Hand Loves You’, with its hapless, sub-Poe, genre-schlock author, offers further satirical scope. In these demolition jobs, Atwood enjoys herself with the same insider glee that Jesuits display when they tell anti-clerical jokes – clever, wickedly funny, all too true.

Constance, when young and innocently alluring as an Arthur Rackham nymph, had a caddish poet–lover called Gavin. We meet Gavin (in ‘Revenant’) a half-century on, his star, libido, and bodily frame in mortal decline. But even decaying Gavin can’t stomach the pretensions of a damp outdoor production of Richard III to which his (third) wife drags him: ‘the director’s vision was that Shakespeare’s Richard was modelled on commedia dell’arte ... The largeness of the hump was deliberate: the inner core of the play (“As opposed to the outer core,” Gavin had snorted to himself) was all about the props. They were symbols of Richard’s unconscious, which accounted for their enlargement.’

Atwood uses a number of proxies, like Gavin, to pay out on academic fashion or artistic afflatus. In ‘Dark Lady’, the quietly erudite Martin (brother to Marjorie, the woman with whom young Gavin betrayed the young Constance) is my favourite. Martin is a Martial scholar (‘what really drew him to Martial was his no-nonsense attitude towards sex’), but is disenchanted with the postmodern scholar’s lot: ‘a thesis was not about why you appreciated your subject: in academia, he’d come to understand, that kind of thing should be reserved for social chit-chat. You had to cook up something more focused.’

Sex, age, death, companionship, vulnerability, vengeance, remorse (and its sub-category, regret): Atwood comprehends all in these tales. Her language sparkles and cuts – metaphoric and incisive (she has written fifteen books of poetry). The stone mattress of the title tale is a stromatolite, a 1.9 billion year old fossilised cushion formed by layer upon layer of blue-green algae. It is a multivalent metaphor: a lethal weapon (read the tale), a wonder, and a commentary on the adamantine imperatives of human sexuality.

Don’t gorge on these tales. They are strong meat, best taken in small bites. That way you can luxuriate in Constance’s (Atwood’s?) hair ‘like disordered egret plumage’, and not be bothered by the writer’s occasional repetitions (skin ‘like a phosphorescent mushroom’ recycles as the ‘Hand’, shimmering like a ‘phosphorescent toadstool’). Read the tales over again to catch the undercurrent of Atwood’s serious environmental, social, and generational concern (in ‘Torch the Dusties’). Or simply revel in this remarkable woman’s glittering intelligence and capacious humanity.