The guard with the Kalashnikov singles me out from the other passengers on the border to Ukraine. I am leaving the frozen state of Transnistria. He leads me to a small interrogation room. Four more border patrol guards and a translator are in the room. The men fossick through my bags and ask questions. ‘Are you carrying drugs or weapons?’ ‘Do you deal drugs or weapons?’ ‘Are you aware that you are entering a country that is at war?’

They pry through my belongings, perplexed by a camouflage T-shirt, a bag of toiletries, and some vitamin C tablets. They ask if I intend to fight for Ukraine. Some of the guards look strangely disappointed when I say no. Eventually I convince them that I am here as a tourist. The guard with the Kalashnikov takes me outside. Wiping the sweat from his brow, he sits down and pulls a vanilla ice cream from a refrigerated tub.

On the bus we pass endless fields of sunflowers. Weeds sprout from holes in the road. We approach a checkpoint manned by soldiers slumped over sandbags in the sun – the blue and yellow Ukrainian flag raised high above them. We’re admitted without an inspection. Some kilometres later we reach a second checkpoint and pass through unnoticed.

At dusk I walk around a park in Odessa. Some locals are smoking pot next to a shrub. Two policemen assume that I am indulging too. They frisk me thoroughly and ask to see my passport. I produce a photocopied version from my wallet. They start to arrest me for not carrying original documents. In the ensuing argument, my basic Russian and Ukrainian are soon exhausted. They just want money. I bribe them down to one hundred hryvnias.

I swim in the Black Sea and let the water lap against my ears. A military plane flies overhead, possibly heading south to Crimea. I can nearly see the region on the horizon. The war seems illusory as I float alongside hundreds of Ukrainians on holiday. 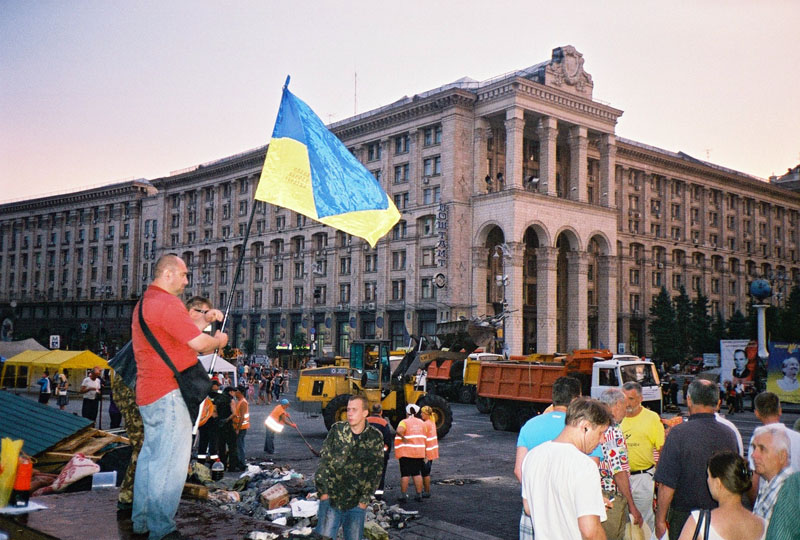 Thirteen months earlier, my mother and I were in a taxi speeding down the highway from Boryspil airport to the Maidan square in Kyiv. The first thing my mother noticed was the proliferation of billboards lining the highway. She hadn’t been to Kyiv for thirty years. Ukraine, long free from the grip of the Soviet Union, was then under the authoritarian kleptocracy of Viktor Yanukovych.

We went to Kyiv to mark a family pilgrimage of sorts; my mother is Ukrainian, with ancestry tracing back to Lemkivshchyna, the homeland of the Lemkos ethnic minority that hails from the foothills of the Carpathian mountains in Ukraine. We knew there would be an immense disparity between our historical idea of Ukraine and contemporary Ukraine. But we were intrigued by the contradictions. It was like peering into a warped mirror that could never be straightened. Our memories felt like fiction.

My mother and I stayed in an apartment on Sofiiska Street, which runs off the Maidan. The prevalence of spoken Russian on the street accentuated our confused impressions. The city almost belonged somewhere else. We felt as lost in the old world as we did in the new. However, there was an unnameable rhythm at play. Kyiv was politically, economically, perhaps even culturally corrupted. It felt as though it might implode and vanish.

Soon after we left in September 2013, the Euromaidan revolution erupted. During months of protests, thousands of demonstrators occupied the square. The uprising culminated in sniper shootings ordered by the government. Yanukovych was inevitably overthrown and disappeared. Watching from abroad, I could almost sense the insurrectionary delirium. The Maidan was alive, but in tatters. I decided to return as quickly as possible. 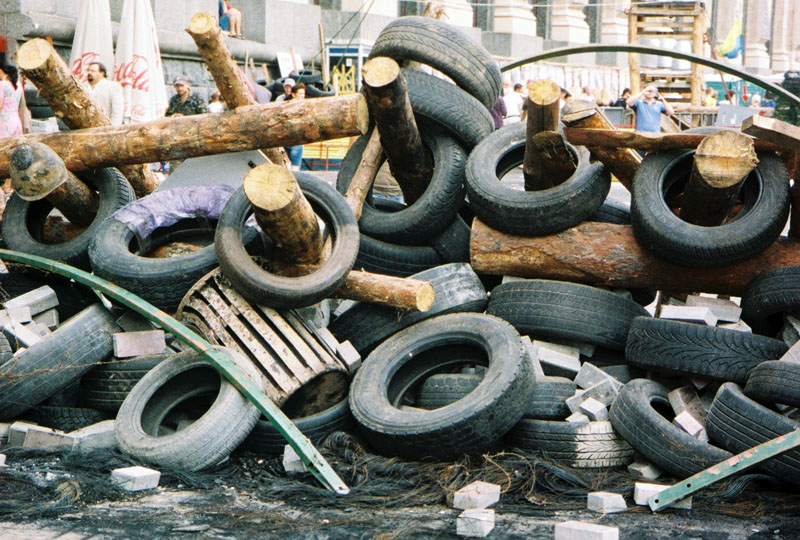 Friday, 8 August 2014. The Euromaidan revolution supposedly ended in February, yet the Maidan is still filled with activists. Some of them have been here since November, without basic food, shelter, or sanitation. The smell of human waste and kerosene is pungent. The Trades Unions Building is blackened from the fires. An enormous banner reading Cлава Украïні! (‘Glory to Ukraine’) covers the façade. Countless merchants sell revolutionary merchandise: flags, wristbands, traditional embroidered shirts, and novelty toilet paper with Putin’s face printed on the sheets.

Among the rubble in the square there are rings of men and women in earnest discussion. A bishop intones the Lord’s Prayer on the main stage. Nationalists practise self-defence as they prepare to fight in Donetsk and Luhansk.

I sit by a roadside café cart. The barista introduces himself as Vasiliy. He has been selling cheap hot dogs and coffee since the revolution began. A pack of bare-chested men in balaclavas charge past. Vasiliy looks at me and says: ‘When you wear this mask, it is not revolution – it is anarchy.’ 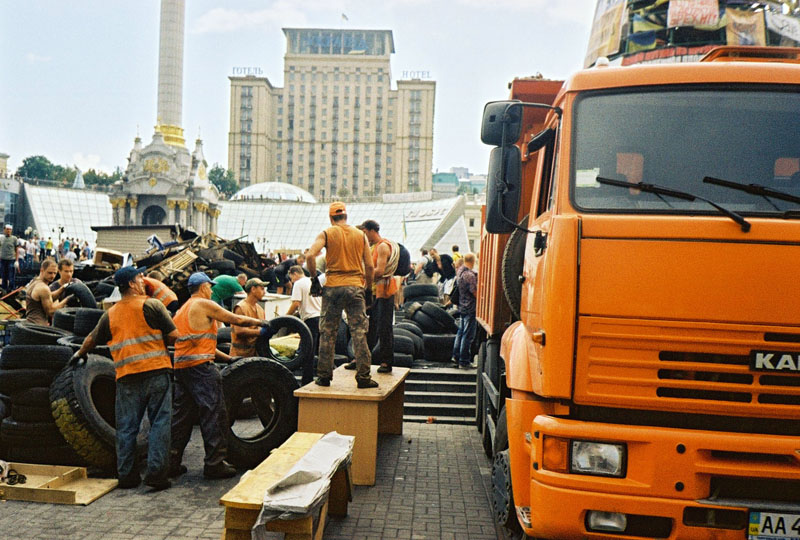 Early next morning I head to the Maidan. Some of the former square protesters have voluntarily joined the Kyiv-1 battalion. They are trying to clear the Maidan of the tent city and its remaining inhabitants. The battalion believes that the revolution is becoming dogmatic and indulgent. The protesters still living there refuse to leave. It is odd seeing European Union-sympathisers turn against other EU supporters. The diehards react militantly. Barricades made of tyres, wood, and rubble are torched. The activists run around in balaclavas and makeshift armour they have fashioned from rollerblading pads. They pick up whatever is lying on the scrap heap – poles, bricks, bits of drain spouting, broken bottles – and threaten the advancing battalion.

I visit Vasiliy’s café cart. An old man is carrying innumerable packets of light bulbs. Vasiliy gives the man a few hryvnias and purchases one of the packets. I open one and find that the filigree has been removed and that the bulb is full of kerosene with a ripped piece of carpet sticking out. I hand the Molotov cocktail back to Vasiliy. He laughs and says: ‘The old man wants change, you know – nice old natural change.’

Two members of the Right Sector – an ultra-nationalist political party which is often deemed to be neo-fascist – sit down next to me. One of them, eating a hot dog, picks at the scab on his friend’s knee with the barrel of his machine gun.

Flames rise but commuters still walk through the square, seemingly complacent. The revolution may be turning in on itself, but groups of nuns stroll by eating McFlurrys. Across the road, a Kobzar plays traditional Cossack songs. A drunk soldier has passed out on the teeth of the public piano. 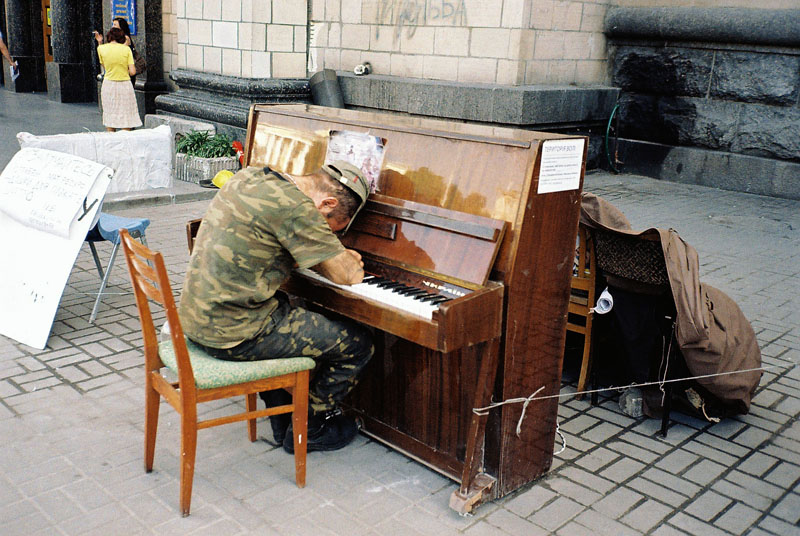 On Sunday thousands gather to clear the square. Rain pelts down as people dismantle tents and barricades. The burnt tyres have been reduced to black strings; they splay out on the concrete like endless nets of scorched hair. Dozens of dump trucks remove debris and return for more. People scour through the rubble for flags to take home as souvenirs. They take down the Christmas tree that has stood in the square since October. An obese man plays the national anthem on a trumpet.

I call my local friend, Sasha. He suggests that the occupants were paid to leave. He invites me to a recovery-day party that is being held in an abandoned textiles factory. Drugs and techno seem to be the priorities of many youth on what could be deemed as the last day of the Euromaidan revolution. I stay in the square and watch the main stage being dismantled. A man jumps onstage and performs an interpretative dance. He sings a cappella gibberish as he shakes and gesticulates. People stop sweeping for a moment and watch him gyrate around the stage in ecstasy.

Though it feels hopelessly fashionable to cite him, the absurdity of this dance makes me recall a line from Slavoj Žižek back in 2009: ‘When an authoritarian régime approaches its final crisis, but before its actual collapse, a mysterious rupture often takes place. All of a sudden, people know the game is up: they simply cease to be afraid.’ The lone dance encapsulates this final rupture, spelling the definitive and successful end of the Euromaidan. It is all just decoration now. 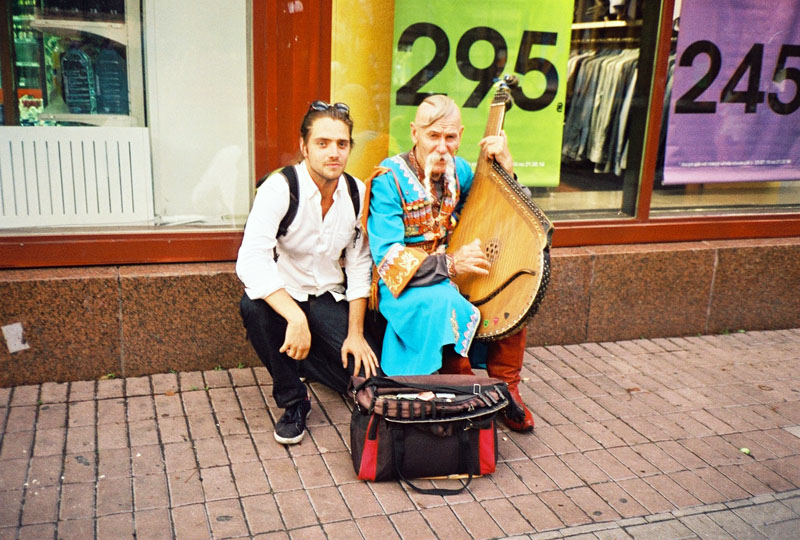 I walk to Zoloti Vorota Station to catch the Metro. Petro Poroshenko billboards line parts of the Metro walls. I look at the impeccable mosaics that cover the ceilings of the Metro system. I think of Sergei Parajanov’s film, Kyiv Frescoes (1966), a surreal short film dedicated to this decorative art form; how the frescoes allude to the cracked and ornate souls of Ukrainians.

Fingers pinch my arm. I turn round and find Vasiliy, there with his girlfriend, Tatiana. We are pressed into the Metro. I point to the frescoes and ask them if they are familiar with Parajanov. Vasiliy’s eyes beam at the mention of the name. ‘He understood Ukrainian culture more than Ukrainians,’ he says.

I catch the Metro to the Vokzal – the national and international train station – in order to buy a ticket for the night train to Dnipropetrovsk. When I emerge from the Metro, people are waiting outside with their luggage. The station is surrounded by police. There has been a bomb threat. We stand around and wait.

The rubble has gone. A circus is in town, with a tank of dolphins. Birds with clipped wings have returned to the Maidan; tourists have photos taken with the birds perched on the ends of their fingers.

Many die each day in the east. The so-called ‘green corridor’ keeps getting attacked. The ceasefire has been breached. Poroshenko is offering more autonomy to the regions of Donetsk and Luhansk; a gesture towards another frozen conflict that will echo the betweenness of places such as Kosovo or Transnistria and that will ruin Ukraine’s chances of joining the EU. Ukraine is being used as a pawn, just as it has been historically, a pawn in the endless ruptures between East and West. I start to think of Ukraine as some grandiloquent metaphor representing the overall dysfunctional state of Europe.

I catch a taxi and head to Boryspil Airport. An Auto-Maidan convoy flies by on the other side of the road, bursting with national slogans and songs. Dusk rolls over as we climb the outskirts of Kyiv. A hymn comes on the radio. Puffing on a thin cigarette, the driver crosses himself. He turns to me and asks, ‘How many times must we wake up, up, up?’

Scott McCulloch works across prose, essay, and sound. His writings have appeared in ABR, Southerly, KYD, at the University of Paris Diderot, and elsewhere. Scott was a recipient of a Marten Bequest for Prose 2017–19, and is nearing the completion of his first novel. He currently lives in eastern Europe.