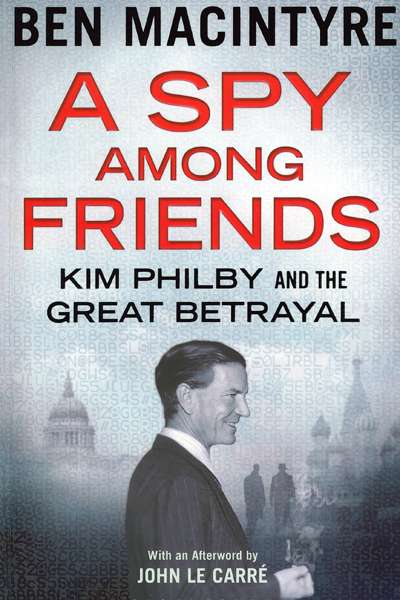 A Spy among Friends: Kim Philby and the Great Betrayal

Harold Adrian Russell (Kim) Philby was the Third Man of the notorious Cambridge spy network set up in the 1930s and partially unmasked in the early 1950s, when Guy Burgess and Donald Maclean fled to Moscow. He had been in British intelligence (MI6) since the beginning of the war, but had been working for Soviet intelligence for some years before that. A high-flyer, charming and sociable, he rose rapidly as an officer in the British service and was even tipped to be the next head of MI6. After narrowly surviving the Burgess–Maclean fallout, he ended up in Beirut in the early 1960s, working as a freelance journalist for the Observer and the Economist and an agent for MI6 on the side. Son of a famous and eccentric Arabist, St John Philby, his Middle East coverage struck an old friend, Flora Solomon, as anti-Israel, and in criticising it to her old friend Victor Rothschild she mentioned that back in their youth in the 1930s he had tried to recruit her as a communist spy. Lord Rothschild passed that on to MI5, which had had it in for Philby for years, and in the new round of investigation, Philby’s own bosses in MI6 were convinced. An old friend, MI6’s Nicholas Elliott, confronted him in 1963 and obtained a partial confession, but then inexplicably left Beirut and allowed Philby to flee, courtesy of his Soviet handlers.

The Sunday Times of London did a great job on the ‘Cambridge spies’ story back in the 1960s, returning to the topic in the 1980s, when Australian Philip Knightley interviewed Philby in Moscow and wrote what seemed like the definitive study, The Master Spy: The Story of Kim Philby (1989). So Macintyre, who is also a London-based journalist, an associate editor at The Times, had to look around for a new angle. He found it in Philby’s friends, the Eton-and-Cambridge Old Boy network that gave Philby extraordinary protection and support for almost fifteen years while he was under suspicion not only in the service but also – for many years, publicly and relentlessly – in the media. Chief among his friends was Nicholas Elliott, who vigorously defended him in the early 1950s and apparently let him escape to Moscow ten years later.

A Spy among Friends: Kim Philby and the Great Betrayal