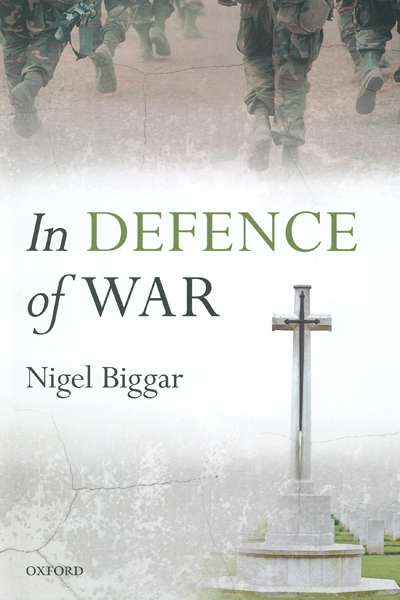 In Defence of War

This book by Nigel Biggar, Anglican minister and Oxford Professor of Theology, is in the rich and broad tradition of thinking about war known as Just War Theory (JWT). JWT sees war as justifiable, but holds that decisions about going to war, as well as about the way it is fought, are subject to moral constraints. While it has its roots in classical philosophy, and has incorporated elements of chivalric custom, its theoretical superstructure was developed by early Church fathers as they tried to reconcile their spiritual commitments with an acceptance of the need for a well-regulated political order.

Any Christian attempt to justify war must of course account for the pacifistic implications of Jesus’s gospel of love and his apparent rejection of the use of force in his injunction to turn the other cheek if struck. St Augustine provided such an account in the fourth century. For Augustine, a Christian, motivated by love, will try to prevent others from falling into, or remaining in, sin. Since, on occasion, the only way to achieve this will necessitate the use of coercive force, Christians can be justified, indeed required, to use violence, including military violence, provided that they do so in response to the right kind of cause (a sinful act), with the right motive (love for the sinner), the right intention (to stop them sinning), and with the authorisation of the sovereign, who has ultimate responsibility for securing the just and peaceful order of his society. These fundamental elements of JWT, put in place by Augustine, were systematised by Aquinas in the thirteenth century and were elaborated in the early modern era by philosophers who grappled with the dilemmas produced by European confrontations with the peoples of the New World.

Andrew Alexandra teaches Philosophy at the University of Melbourne, where he was Director of the Australian Research Council Special Research Centre in Applied Philosophy and Public Philosophy from 2006-12. He has research interests and extensive publications across a wide range of issues in professional and applied ethics and political philosophy. He is currently writing a book on pacifism.

In Defence of War

Andrew Alexandra teaches Philosophy at the University of Melbourne, where he was Director of the Australian Research Council Special Research Centre in Applied Philosophy and Public Philosophy from 2006-12. He has research interests and extensive publications across a wide range of issues in professional and applied ethics and political philosophy. He is currently writing a book on pacifism.