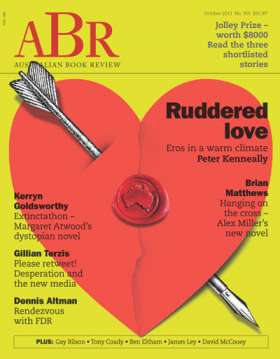 Welcome to the October issue! The ABR Elizabeth Jolley Prize is now firmly established as one of Australia’s most prestigious and lucrative short story competitions. 1200 people entered this year. Our judges have whittled them down to a shortlist of three stories, and we publish them in the new issue. The winner will be announced at a ceremony in Sydney on 28 October. Otherwise, it’s a peak season for new fiction, and several major new novels are reviewed – Richard Flanagan’s The Narrow Road to the Deep North (James Ley), Alex Miller’s Coal Creek (Brian Matthews), Margaret Atwood’s MaddAddam, and Roger McDonald’s The Following. In our Theatre column, Ben Eltham finds little to like in David Williamson’s new play, Rupert.

Rendezvous with Destiny: How Franklin D. Roosevelt and Five Extraordinary Men took America into the War and into the World by Michael Fullilove

The Narrow Road to the Deep North by Richard Flanagan

The New Front Page: New Media and the Rise of the Audience by Tim Dunlop

A History of Silence by Lloyd Jones

by The Editors
Fiction

The New Front Page: New Media and the Rise of the Audience by Tim Dunlop

Why Priests?: A Failed Tradition by Garry Wills

The Following by Roger McDonald

What Was Left by Eleanor Limprecht

Trust Me: Australians and their Politicians by Jackie Dickenson

The Undivided Past: History Beyond our Differences by David Cannadine

Fragile Empire: How Russia Fell in and out of Love with Vladimir Putin by Ben Judah

The Philosopher, the Priest, and the Painter: A Portrait of Descartes by Steven Nadler

The Local Wildlife by Robert Drewe

Cooked: A Natural History of Transformation by Michael Pollan

The Boy Colonel: Lieutenant Colonel Douglas Marks, the Youngest Battalion Commander in the AIF by Will Davies

by Ruth Starke
YA Fiction