Any sequel, much less the final book of a trilogy, intensifies the dilemma presented to a reviewer who does not wish simply to provide a plot summary, but for whom it’s impossible to say anything coherent about the book without giving some idea of what happens in it. For any reader who might not have read or can’t clearly remember the first two books in this trilogy, Oryx and Crake (2003) and The Year of the Flood (2009), it’s fortunate that brief summaries of plots and characters are given at the beginning of this third and last volume. The plot of Atwood’s trilogy is particularly complicated, stretching as it now does across three novels and involving events, concepts, and creatures that all require explanation. Who are the Crakers, and why do they purr? Are the wild bees really listening when Toby talks to them? And what is a rakunk?

The word ‘MaddAddam’ is a palindrome, containing a number of words including synonyms for ‘father’, ‘mother’, and ‘crazy’ as well as the name of Biblical Adam, the fallen man. It’s exactly the kind of tricky name you’d expect from a mysterious online identity who runs a macabre game called Extinctathon: ‘Adam named the living animals, MaddAddam names the dead ones.’ Parenthood, madness, and the origins of humanity are indeed among the many topics that this scintillating novel either touches on in passing or explores in depth.

Many of the other names in this novel are also jokes, black or otherwise: three of the minor characters – the brothers Crozier, Oates, and Shackleton – are named after an assortment of Antarctic explorers, and anyone familiar with these names won’t be surprised to learn that Oates is the one who has not survived as far as the third volume. The innocent child who comes to represent hope for the future is a sweet-natured, affectionate, luminously green-eyed little boy whose name is Blackbeard.

One of the several ragtag groups who make up Atwood’s post-apocalyptic society comes from the remains of the Maddaddamites, an organised group of bioterrorists led by the late Crake, who were eventually responsible for the genetically engineered plague that wiped out most of humanity. They are fully human, as are three other groups: the eco-friendly God’s Gardeners, the survivors from the underclass of the Pleeblands, and the viciously murderous Painballers – though there’s some discussion about whether the lives and crimes of the Painballers have stripped some essence of humanity from them.

And there is another humanoid group: the Crakers are partly human but have had a number of the more troublesome human traits removed, genetically engineered by the mad genius Crake. Characters central to the first two novels recur in this story, notably Adam One, Jimmy, and Toby. The innocent Crakers are the most charming thing about this book, and their interactions with other characters provide much of the humour, though the wisecracking conversation of the lively lovers Toby and Zeb is also a product of Atwood’s rapid-fire wit.

There is another part-human group: readers of the earlier books will remember the Pigoons, the large pigs whose brains contain human matter and who are, in consequence, extremely smart and strategic enemies, though there’s a startling, touching twist towards the end. The landscape is littered with genetically spliced creatures, but it’s interesting to note that the humanity of the murderous and sadistic Painballers is questioned despite their biological integrity; it isn’t only genes that make a person what we think of as human. One of the very big ideas explored in this trilogy is the question of what it is that does make us human, and where the boundaries between the human and the non-human actually lie, if boundaries there really be at all.

Readers familiar with Atwood’s work will not be surprised to learn that one of the most troubling aspects of this book is the unresolved question of female autonomy, sexuality, and reproduction: women continue to be used, abused and threatened in a world where sexual jealousy bites as sharply as ever, and women are still the vessels of reproduction in a world where conception could be the product of brutal rape or of an excess of innocent enthusiasm from a pack of part-human Crakers and their wagging blue penises.

‘Atwood is not only a novelist and storyteller of vast experience, but also an experienced writer of dystopias, and her breadth of knowledge and depth of intellect make her management of this sort of narrative invention look effortless.’

Unsurprisingly, given Atwood’s intellectual energy and prodigious imagination, this book is bursting with ideas. At its heart is the story of Zeb and Toby – their survival thus far, their romance, and their relationships with the other survivors – but ideas about technology, survivalism, political power, scientific anarchy, religion, literacy, ecological awareness, and the nature and culture of genetic material are the platform on which this imaginary world is built, and many of these fields are already familiar territory in Atwood’s work. She is far more aware than many writers who venture into the future that in order to write a good and convincing dystopia you need to provide a solid back-story: a convincing and logical account of the processes – political, social, technological – by which the world got from where we are now to the time and place where the imaginary future occurs. Atwood is not only a novelist and storyteller of vast experience, but also an experienced writer of dystopias, and her breadth of knowledge and depth of intellect make her management of this sort of narrative invention look effortless. 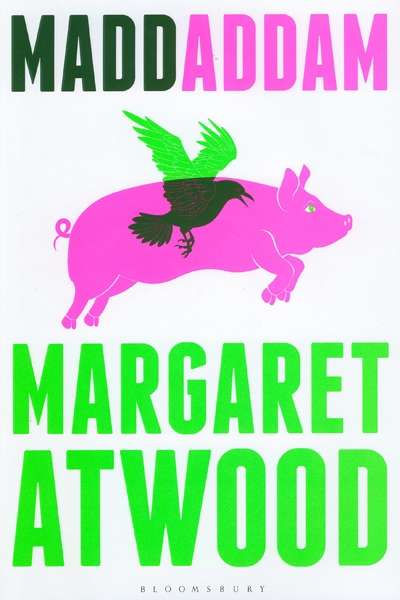