It is no secret that Lily Brett has mined her past and her family history in her fiction. Her parents, like those of her current alter ego, Lola Bensky, were survivors of the Łódź ghetto and Auschwitz concentration camp; Lola, like the author, was born in a displaced persons’ camp before her family emigrated to Australia. Lola, a chubby baby, was possibly the only plump person in a camp whose other inmates were mainly Jewish survivors of Nazi death camps. Save quoting at length, it is impossible to convey the inflections that render humorous such an observation.

Humour and the Holocaust make unlikely bedfellows, but it would be a mistake to dismiss Brett’s work as lightweight. The simplicity of her style is deceptive, and sits comfortably in the tradition of Jewish or Yiddish humour, which is often crude, self-deprecating, even self-loathing. Jerry Seinfeld once said of someone: ‘I think he converted to Judaism just for the jokes.’ Brett’s humour both intensifies the shock of Lola’s anecdotes and gives the reader breathing space in which to recover.

Growing up in suburban Melbourne, Lola overhears horrors and half-truths she should not have to bear; she misinterprets silences and words whose meaning she is too young to grasp. The seminal issue for the adult Lola is how to come to terms with memories not directly related to her lived experience; and how to resolve the devastating effects of the guilt and responsibility that she feels for her parents’ trauma.

In 1967 an Australian magazine sends nineteen-year-old Lola to London to write profiles of rock stars , but she doesn’t fit into the swinging scene. For a start she is still chubby: her thighs rub together and her flesh pokes through her fishnet stockings; her sleeves cut into her arms; she gets hot and sweaty and Linda Eastman (Paul McCartney’s future wife) calls her the ‘fat Australian journalist’. Lola, who is a nice, neurotic girl, would not feel comfortable anywhere.

From London to Monterey, Los Angeles and New York, Lola has fabulously prosaic conversations with an endless parade of the rock world’s ‘who’s who’: from Jimi Hendrix to Cher, Twiggy, Mick Jagger, Mama Cass, Janis Joplin, Pete Townsend, Brian Jones, Keith Moon, Dave Dee, Barry Gibb, Manfred Mann, Cat Stevens, Jim Morrison, Andy Warhol, Lillian Roxon, the list goes on. Most of us would be in awe, but not Lola. Her disarming naïveté renders no subject off limits – diet, grooming, drugs, sex, love, relationships, parents, petty cruelties, cold-blooded barbarism – but her genuine interest and compassion make up for her exposing the foibles and vulnerabilities of her rock star interviewees.

Lola has learnt to ‘detect anguish at a distance. From the other end of the house, from the other side of the street, possibly even from a block or two away. She could spot anguish even if it came in the disguise of a smile or was hidden behind a grin.’ Empathy for the bereaved has been instilled in her from an early age. Her mother, Renia, lives with so much grief that she has no room in her heart for the living. Her father, Edek, is so bereft he would rather lose himself in crime thrillers than face the reality of a wife who avoids his affection. Renia berates Lola for being fat, then reminds her how lucky she is. No wonder Lola feels ‘wrong’: her parents are too distant to provide emotional care for their daughter.

By the age of thirty, Lola has returned to Melbourne and married ‘Mr Former Rock Star’. The personalities of this first spouse, her children, and even her beloved second husband emerge less distinctly than the reality of her famous acquaintances. Perhaps Brett is more protective of people who are still part of her life than she is of those who are accustomed to public scrutiny. Fortunately, Mr Former Rock Star is dispatched in a single chapter and replaced with ‘Mr Someone Else’, an artist not unlike Brett’s current husband, David Rankin.

Lola ought to be happy. At fifty-one she is living in New York City with the love of her life, and has become the bestselling author of a soft-boiled detective novel. In The Ultra-Private Detective Agency, two Jewish gumshoes, Harry and Schlomo, and their employer, Petrushka Inge Maria Pagenstecker, or ‘Pimp’ for short, solve routine investigations with hilarious ineptitude. Tying up the loose ends of cases and plots brings Lola a sense of control, but in ‘real’ life she still thinks ‘that being cheerful, too much of the time, [is] unnatural’. Anguish finds her, grips her by the throat, and throttles her with debilitating panic attacks and agoraphobia. In short, Lola’s family history catches up with her. Many pills and much psychotherapy later, she finally realises that she can never repair, nor compensate for, her parents’ past.

In a poignant conclusion, Lola muses on her lists of the dead – family, friends, tragic rock stars – and pays tribute to the few survivors. Lola Bensky has learnt to live with her sorrows. Nobel Laureate Elie Wiesel writes that the ‘best characteristic [of the Jewish people] is their desire to remember’ and that everyone has a duty to remember, to reject despair, and to transform the experience into something else. I suspect that, for Brett, resolution has come through creative remembering and retelling, and by constructing a fine comic novel from an unspeakable tragedy. 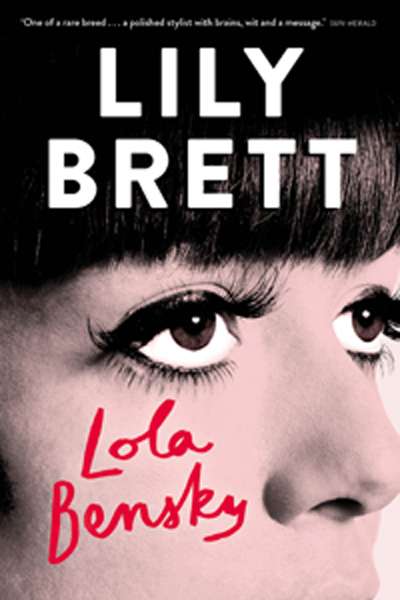