A month of Miles

Australia is glutted with literary prizes, all competing for attention; but the Miles Franklin Literary Award, first awarded in 1957 and now worth $42,000, retains a cachet all its own. This month’s shortlist is very exclusive: the three shortlisted books are Roger McDonald’s When Colts Ran (Vintage), Kim Scott’s That Deadman Dance (Picador), and Chris Womersley’s Bereft (Scribe). The winner will be announced in Melbourne of all places, on 22 June. 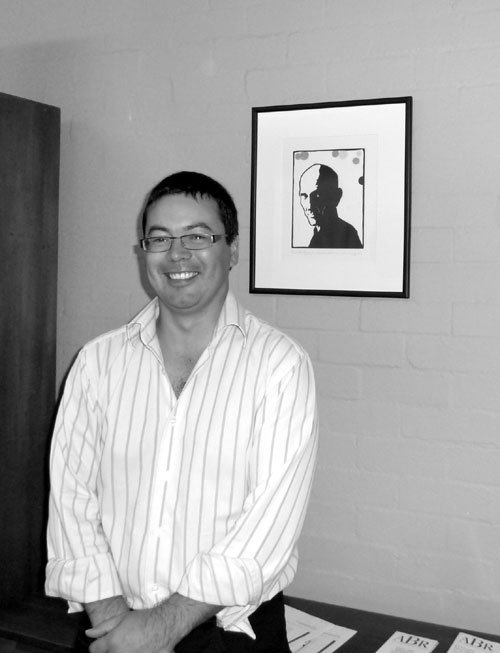 Because of its unique status, much is written about the Award, not all of it original or edifying. This month we are delighted to be able to publish Patrick Allington’s long, nuanced article about the Miles Franklin Literary Award (or ‘the Miles’, as he calls it). Patrick – the recipient of the first ABR Patrons’ Fellowship – spent several weeks reflecting on the Award’s history, strengths, quirks, and past controversies. Fascinatingly, Patrick (pictured above in the ABR office, after a roundtable discussion) has elicited comments from some of the major authors whose works have been excluded from consideration because they don’t‘present Australian Life in any of its phases’.

‘Mot of the Month’ goes to Rupert Murdoch. In the foreword to a new collection of his great-uncle’s essays, he writes: ‘I have been accused of many things, but never literary criticism.’ Walter Murdoch was already seventy-five when young Rupert left for Oxford, in 1950. Keith Murdoch urged his son to visit him – ‘or you might never get the chance’. The grand old man of Australian essays lived for another twenty years. Imre Salusinszky, who included him in The Oxford Book of Australian Essays (1997), has compiled On Rabbits, Morality, etc.: Selected Writings of Walter Murdoch. Courtesy of UWA Publishing, we have ten copies to give to new print or online subscribers.

Christopher Menz – co-editor of this issue and a former director of the Art Gallery of South Australia – will leave ABR later this month after a year as Philanthropy Manager, a part-time position jointly funded by the Australia Council and ABR. His term has been transformative for ABR. When Christopher joined us last year, we had about twenty Patrons: now we have more than ninety. Fundraising at ABR is not about air kisses or canapés (though we are very partial to a Dobos Torte). Without the support of individual benefactors and philanthropic foundations, there would be no Online Edition, no patrons’ fellowships, no paid editorial internships, no Elizabeth Jolley Short Story Prize – simple as that. Christopher Menz, who remains contactable and eminently patronisable until 17 June, will become Acting Director of the Ian Potter Museum of Art in July. An announcement about his successor will follow in due course.

Meanwhile, Joel Deane – poet, novelist, journalist, and chief speechwriter to Premiers Steve Bracks and John Brumby – has joined the ABR board. His article on Julian Assange appeared in the May issue. We list all our Board members on the imprint page of the print edition.

Delivery of ABR can be slow, especially in northern Queensland. We’re monitoring this and will do what we can to expedite delivery to all our readers. It’s very helpful when you notify us of receipt of your copy (just email us or fax us the flysheet). On the imprint page we will list the date of lodgement with Australia Post (30 May in this case), so that readers can see how long magazines take to reach them.

HOWL and the Fox

Ten new print subscribers this month will receive a signed copy of Marion Halligan’s Shooting the Fox, courtesy of Allen & Unwin. Judith Armstrong, in this issue, describes Halligan’s stories as  ‘slyly double-edged’ and ‘always elaborated with a great deal of cleverness’. Ten other new print subscribers will receive a double pass to the Queensland Art Gallery/Gallery of Modern Art exhibition Surrealism: The Poetry of Dreams (11 June–2 October 2011). For ten renewing print subscribers, we have copies of HOWL – the acclaimed film about the writing and reception of Allen Ginsberg’s eponymous poem, starring James Franco – on DVD, thanks to Madman. Be quick, though; they’ll go in a flash. Call us now to subscribe or renew (03) 9429 6700, or visit our print edition or online edition subscription pages.