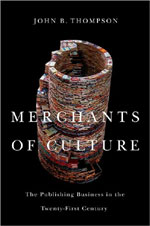 Since well before the global financial crash of 2008, there has been pessimism about the future of the book in an age of new paradigms: electronic transmission and gadgetry, all thus far untested, in a screen culture age. This uncertainty still hovers, like a pungent doom-cloud, despite the furious conversion of new and backlist files into multiple formats in publishing houses everywhere in readiness for the e-revolution. This is expensive and time-consuming work, done in good faith as an investment for the future. One by-product has been a chilling realisation that file archiving is poorly managed by many houses and that finding print-ready files of backlist books to convert to e-format isn’t as easy as was anticipated.

John B. Thompson, a sociologist from the University of Cambridge, has written a highly readable account of the last fifty years of trade publishing in the United States and the United Kingdom (it follows an equally valuable book on academic publishing in 2005). He has interviewed many of the insiders, with anonymity, in this oldest creative industry, as he describes it. It is still an arcane industry to many outsiders, as well as to a good number of its players, so drawing in the voices of such a field of participants enhances the cogent argument Thompson develops. He usefully runs this through Pierre Bourdieu’s theory and concept of the field in cultural production to try to get a grip on what has happened in trade publishing. Thompson’s ‘logic of the field’ – identifying the dynamic space out of which we operate, the set of factors determining the conditions under which we participate and play the game – is wonderfully populated by his informants, creating a particularly rich picture of this cultural industry.

Some of the anecdotes from Thompson’s insiders will be alarming to many readers of publications such as Australian Book Review. We may be used to considering how fast-moving consumer goods occupy the market, but not that books fit into this category. We so often consider books as cultural objects, saturated with symbolic value, and imagine a clear divide marking out mass-market books. I would suggest that the divide is murkier when traditional retail book outlets are overtaken by non-traditional outlets, including supermarkets, as has happened in the United Kingdom in quite spectacular percentages since 2000. Of course, publishers will always need comprehensive and semi-specialist bookshops, and long may they thrive for the tremendous services they offer and for the attention they pay to the symbolic value attached to books through prestige, prizes, and intellectual acclaim. One of the more disturbing quotes in Merchants of Culture deserves to be repeated here as a reality check, though. It is from one of those anonymous informants, a chief operating officer of a large publishing house, on the supply chain:

Thompson shows us how the model of mass-market publishing and bookselling has changed everything, across the whole industry. We can see the results of the key developments in trade publishing when we enter bookshops, chain or independent: the increasing corporatisation of publishing has seen more emphasis on ‘big’ books as part of the corporate world’s expectations for growth each year. This has, among other things, made for a different layout in the bookshop, where display now carries a price tag. Marketing tools previously used only for mass-market paperback books are now common-place across the board in trade publishing, and the second key development, the growth of chain bookshops, just reinforces all of these changes. Thompson argues the matter of diversity: with more new books published in the United States and the United Kingdom every year (270,000 in the former; 120,000 in the latter in 2009), diversity of output can be well proven, but diversity in the marketplace is another matter.

Success breeds success, and can crowd out the rest. There have always been books that are not noticed, purchased or read, and ‘little’ books that take the world by storm. But the ‘unrealistic growth targets of the large corporations’ havetaken us into a new sphere of short-termism, according to Thompson. The life of a book has a span of around six weeks, and when big commercial fiction writers such as James Patterson, who used to publish two books per year, now release six, there is even less oxygen for first-time or (that pejorative term) ‘mid-list’ authors.

That forms the third key development identified by Thompson: the rise of literary agents who were able to exploit a range of rights and licensing opportunities not fully realised prior to the 1970s, including interest from Hollywood, foreign language rights, and the splitting of English-language rights. These three factors – the domination of publishing by transnational corporations, with four or five key players after decades of mergers and acquisitions; the growth of chain bookshops; and new-wave agents with chutzpah, who lifted the bar on advances and took book sales to auction – are all related. They have impacted on one another to get us to this rather awkward place, where fewer players wield ever-greater power.

Publishing has traditionally been a long-term venture, with the major value located in the ongoing life of a book; today, short-term activity is something many established authors will attest to, when dumped by publishers they imagined they were in a long-term relationship with. Thompson’s book gives us insight into how such decisions are made, how marketing budgets are applied to ensure that substantive books go out to retail fully armed, while others, without such attention, become collateral damage. He quotes some publishers on ‘big’ books and the ‘perverse incentive within the large publishing corporations to pay more for books rather than less, because the more you pay, the bigger the book …’ as well as offering the cautionary note that a big book ‘is not a bestseller; it is merely a hoped-for bestseller’.

While much reasonably up-to-date discussion about the digital revolution in books is included here, what is even more valuable is Thompson’s description and evaluation of trade publishing, and his excellent account of the big trends since the 1960s. It is a shame that Australia wasn’t included in his study, particularly as our hardcover/paperback system operates so differently, but from within the transnational corporations’ influence on our market we can learn a bit about what’s at stake in their business model when it is applied to books. Thompson quotes some publishers as saying that, in this trend of a smaller number of books accounting for a larger share of the revenue, the top ten per cent make all the difference; that it may be that ‘On the new hardbacks … probably half lose money and half make money, but only thirty percent really exceed what we’re looking for.’