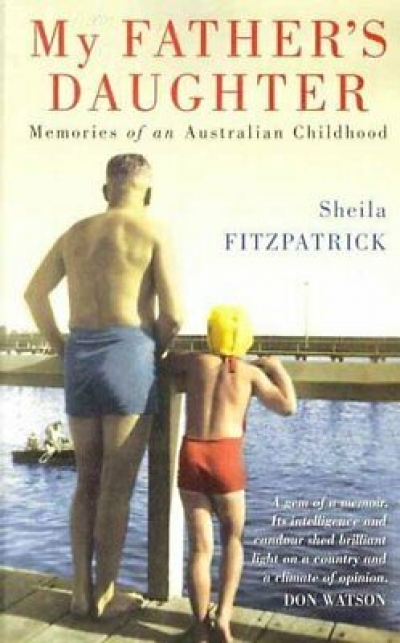 My Father’s Daughter: Memories of an Australian childhood

Even the cover design of Sheila Fitzpatrick’s memoir gave me something to ponder. The title, which signals the father–daughter story, is linked with an engaging seaside photograph of the two of them. The father’s swimming trunks and the daughter’s bathing cap have an authentic 1940s look. Add to that a bland subtitle, Memories of an Australian Childhood, and the tough confrontations of the text may come as a surprise.

The subtitle is misleading in more than one way. Sheila Fitzpatrick’s childhood in Melbourne, brilliantly evoked, ends halfway through the book. Next come Melbourne University; the first steps in her distinguished career as an internationally respected historian; friends and lovers in a time of social and sexual freedom; friction with both parents, unresolved; then the ‘Escape’ from Australia and postgraduate years at Oxford, followed by the author’s first period of study in Russia.

Pondering that insipid subtitle – what was Sheila Fitzpatrick thinking? – I went looking for my copy of Kathleen Fitzpatrick’s memoir, Solid Bluestone Foundation: Memories of an Australian Girlhood (1981). Almost a perfect match, it seemed. You could read them side by side as the stories of two generations in the Melbourne History Department, in postgraduate study at Oxford (which both disliked) and in subsequent successful careers, Kathleen at Melbourne University as a much admired associate professor, Sheila as far away as she could get.

They could be mother and daughter. But theirs was a distant, edgy relationship, as revealed in Kathleen’s text. In one throwaway half-line, Kathleen dismissed Brian Fitzpatrick, ‘to whom I was briefly and unhappily married’. Sheila’s mother, Dorothy, was Brian’s second wife, another historian, but one whose career was cut short by marriage to the charming, unreliable Brian, and by her own lack of confidence. Strangely, neither egalitarianism nor money troubles deterred Brian from sending his daughter to the expensive private school in Toorak where his first wife’s name appeared in gold lettering on the honour board. Was there some rivalry in the choice of school? Sheila thought there might have been.

As it happens, I remember both the Fitzpatrick wives. Kathleen, whom I encountered in my first year as a student at Melbourne University, was a superb lecturer, polished, measured in style, perfectly paced, and intellectually stimulating. Perhaps it was her limitation that there were no surprises, nothing quirky or paradoxical. But at a time when there were very few women lecturers, she set the bar so high that I couldn’t take her as a role model.

Some years later when I was appointed to the English Department in the newly established Monash University, I met Dorothy Fitzpatrick. Although she was older than most of the professors, she had the modest rank of senior tutor in History, which gave security of tenure but no study leave and no automatic consideration for promotion. When I reached this level, said to be created for unambitious women, a colleague warned me to bestir myself and publish – ‘or you’ll be stuck, like Dorothy Fitzpatrick’. Dorothy herself seemed happy enough. Clear blue eyes, soft silvery hair in an unfashionable bun, long tweed skirts in a time of jeans and miniskirts, she looked grandmotherly. After years of propping up shaky family finances in uncongenial schoolteaching, Dorothy had reclaimed the place in academia that marriage had interrupted.

Sheila Fitzpatrick’s account of her mother shows her as perpetually depressed and discouraging, in contrast to the friendly, buoyant Brian. In old age, ‘a mischievous, teasing Dorothy’ astonished her daughter. That quality was well known in her fifteen years at Monash, where ‘Dorothy stories’ abounded. One of the best authenticated has Dorothy appearing at the staff room door during morning tea to call a young woman colleague to their shared telephone extension. ‘It’s for you, Patsy,’ she said. ‘It’s a man. Sounds like a MARRIED man.’

The focus of My Father’s Daughter is Brian Fitzpatrick, a historian who never fulfilled his promise. Working outside the system as an economic historian and author of important studies of Australian society, he applied for academic posts but was always rejected. A maverick and a drinker, he would have been a high-risk appointment. Journalism and a series of research grants brought a small irregular income. He was the mainstay of the Australian Council for Civil Liberties, and a troublemaker within it. As a defender of refugees and crusader against the White Australia Policy, he gave his energies generously. He was less effective in promoting his own cause. In the Cold War period he was under ASIO surveillance, but he was not a communist, not even a committed Marxist. He insisted on his right to be whatever he pleased, and on his duty to defend the unpopular beliefs of others.

Brian was first a hero and later an embarrassment to his daughter. He taught her to question everything, and this included his beliefs. Was it necessarily heroic, she asked, always to be against authority? He cast himself as a left-wing David to the Establishment’s Goliath. But did Goliath have a point?

Brian’s affairs, whether sexual or romantically platonic, were a source of tension in the Fitzpatrick house. Sheila left home as soon as she could, but because she chose an historian’s career she could not escape her father’s influence, nor her mother’s negative example. To make it even harder for herself, she chose modern Russian history as her scholarly field. She questioned her father’s refusal to show dissidents within the USSR the same concern he gave to dissidents in Australia. Her first scholarly article puzzled readers: which side was she on? Was it always to be ‘a plague on all your houses’?

When she left for Oxford, Sheila’s closest relationships were unresolved. In two poignant scenes, she recalls being alone, shocked and desolate at news from home. Just before Easter 1965, her former boyfriend Christopher Masterman was killed in a car crash outside Canberra. With him died a young Monash lecturer in English, Cecile Parrish. Sheila had refused to make a life with Christopher. She did not want to repeat her mother’s unhappiness in marriage and motherhood. And yet she had thought resentfully of Cecile as her ‘replacement’.

A few months later, a telegram from Melbourne brought the second blow. Brian Fitzpatrick had died suddenly. Sheila’s loss was compounded by the knowledge that her last letter home was written angrily, in a manner that was sure to hurt. He had not understood how she felt about Christopher’s death, and he had written sentimentally about a young woman historian whom he admired. Sheila thought of this woman as another ‘replacement’. She resented Brian’s attention, whether fatherly or flirtatious, being given to anyone else.

This memoir, written forty-five years after her father’s death, is an act of reparation. She recalls his intelligence, generosity and kindness, and above all the unconditional love he gave her. Whatever she did, he was there to applaud. By contrast, she remembers her mother’s refusal to praise, and the grudging attitude that gave the Fitzpatrick house its chronic unhappiness. In retrospect, Sheila Fitzpatrick is fair-minded about her mother and tough on her own younger self. She does not let Brian off lightly. One sharp deflating comment: ‘he took criticism well, especially when he was the centre of attention.’ That is the astringent note I associate with Dorothy Fitzpatrick. This candid, poised, and emotionally resonant memoir shows the author as her mother’s daughter as well as her father’s. 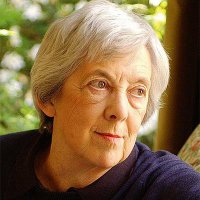 Brenda Niall’s writing career began during her time as an academic at Monash University, where she was Reader in the Department of English. Since 1995 she has been writing full time. Her books include award-winning biographies Martin Boyd: A Life (1988), Georgiana (1995), The Boyds (2002), Judy Cassab (2005), and a memoir, Life Class (2007). Her book The Riddle of Father Hackett was shortlisted for the 2010 Magarey Medal for Biography. She is a frequent reviewer for The Age and ABR, and has been a guest at the Melbourne, Sydney, Adelaide, Brisbane, and Byron Bay literary festivals. In 2004 she was awarded an AO for services to Australian Literature. Her latest book is Can You Hear the Sea? My grandmother's story (Text Publishing, 2018).

My Father’s Daughter: Memories of an Australian childhood

Brenda Niall’s writing career began during her time as an academic at Monash University, where she was Reader in the Department of English. Since 1995 she has been writing full time. Her books include award-winning biographies Martin Boyd: A Life (1988), Georgiana (1995), The Boyds (2002), Judy Cassab (2005), and a memoir, Life Class (2007). Her book The Riddle of Father Hackett was shortlisted for the 2010 Magarey Medal for Biography. She is a frequent reviewer for The Age and ABR, and has been a guest at the Melbourne, Sydney, Adelaide, Brisbane, and Byron Bay literary festivals. In 2004 she was awarded an AO for services to Australian Literature. Her latest book is Can You Hear the Sea? My grandmother's story (Text Publishing, 2018).