Hand Me Down World by Lloyd Jones

Lloyd Jones’s Booker-shortlisted ‘breakthrough’ novel Mister Pip (2006) began life as a collection of random memories and myths written on a wall, designed to be actively pieced together by the reader. ‘I was trying to avoid narrative because, when you write it, sometimes it’s like a runaway bloody thing, it’s voracious,’ Jones told The Age’s Stephanie Bunbury in 2008. ‘The story is being manufactured rather than created; I wanted to avoid that.’ Of course, he eventually succumbed and gave the story a strong central narrative – indeed, a voracious, runaway narrative.

Hand Me Down World is Jones’s ninth work of fiction, and his first book since Mister Pip. It combines the page-turning quality of Pip with the innovative fragmented narrative style that Jones had reluctantly abandoned. It follows the fate of an unnamed African woman (a hotel maid working on the Tunisian coast, who adopts the name ‘Ines’) who is tricked into giving up her baby, which propels her on a journey across Europe to retrieve her stolen child. We learn Ines’s story through a succession of witness–narrators: her friend and colleague at the hotel; a truck driver who picks her up in Sicily; her employer in Berlin; and the Italian inspector responsible for tracking her down, among others.

Hand Me Down World actively engages the reader in the process of constructing the novel, sifting through individual accounts much as the investigating inspector does, weighing different points of view, balancing them against Ines’s firsthand account of her experience, which, teasingly, we don’t encounter until the final third of the novel. This device makes the reader hyperaware of the fact that they are, like the various narrators, bringing their own cultural assumptions and life experience to their reading. Jones plants false seeds of information from his unreliable narrators, resulting in contrasting stories and forcing decisions about whom to believe – a process that mirrors how we encounter people in real life.

By repeatedly drawing attention to its constructed narrative (‘Some of the things I will say now are what she told me’), Jones never lets his reader forget their responsibility in interpreting the story. This sifting and balancing of information is mirrored within the narrative, too. Ines must ‘make up the whole out of a few details’ when imagining her stolen son’s life. And her blind employer must construct reality ‘out of scraps’ relayed to him by his trusted seeing-eye guides, combined with his necessarily limited experience.

A central concern of Hand Me Down World, like Mister Pip, is the collision of two worlds, and the resulting fallout. This is embodied in the initial setting of the coastal hotel overlooking Europe, where poor African staff serve wealthy white guests and those lucky few who have crossed over into their world of wealth and privilege. Jones is very good at portraying the absurdities and excesses of Western culture through an outsider’s eyes, as in this description of watching hotel guests play in the sea:

The women wade then sit down as they would getting into a bath. The men plunge and then they swim angrily ... Then they stop as if wherever they were hoping to get to has unexpectedly arrived. So they stop and they lie there with their faces turned up to the sky.

The Third World and First World characters glancingly regard one another as they would another species – with curiosity and a degree of detachment. Ines is compared to a dog, or a pet, throughout the various narratives, from the Italian truck driver who explicitly, scornfully, refers to her as such, to the blind man who hires her for ‘guide-dog duties’. While the anthropological approach works beautifully at an observational level, the resulting metaphors can be heavy-handed (‘I am a dog she has pulled off her prize pedigree’). Jones deftly demonstrates the integral role of luck and timing in determining a person’s fate. Central to this is the accident of birth, and whether we are ‘born beneath a mountain of rubbish’, as Ines’s African hotel colleague reflects on her beginnings, or ‘born a tourist’.

The real project of this novel is one of enticing the reader to walk in the shoes of an ‘illegal’ African refugee, to cross the line into regarding as human the people we experience as ‘other’. Hand Me Down World cleverly reflects a patchwork of Western views about Third World refugees, including an eccentric snail collector who unquestioningly takes Ines in, knowing her situation, and the American food writer (a wonderfully unsympathetic creation) who refers to her as an ‘alien’, an uncomfortably familiar term for the reader, made new and shameful by the appalled Italian villager who narrates the incident. But there are moments where Hand Me Down World shifts from nuanced portrait into polemics. (‘A human being is of no more value than a sack of rice. A human being is merchandise.’)

It is hard to fault an overdose of compassion, though. Overall, this is a beautifully constructed, genuinely affecting book with immense heart and a varied cast of expertly inhabited characters, each with his or her own distinctive voice and milieu. One character reflects, summing up what could be Jones’s mission statement for the novel: ‘I used to find myself saying, I can’t imagine. But, I’ve since found out, you can – it’s just a case of wanting to.’ 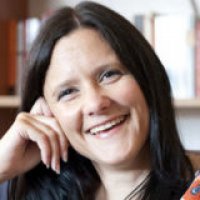 Jo Case is senior writer/editor for the Wheeler Centre. Her previous roles have included editor of Readings Monthly, the newsletter for Readings Books & Music, books editor of The Big Issue, co-editor of their annual fiction edition, and associate editor of Kill Your Darlings. Her reviews, essays and opinion pieces have been published in The Age, The Australian, and The Sydney Morning Herald, and her short stories have been published in the Sleepers Almanac and Best Australian Stories. Her first book, Boomer and Me: A memoir of motherhood, and Asperger’s, was published by Hardie Grant in Australia (April 2013).