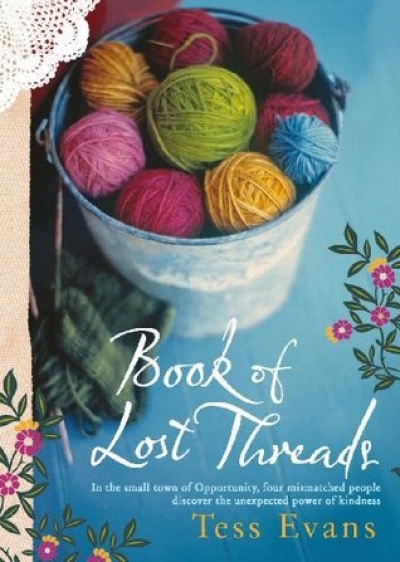 When Miranda Ophelia Sinclair, ‘Moss’ to her friends, discovers a document featuring the name of her heretofore unknown father, she sets out to ﬁnd him and to discover her genetic roots. Her complicated family history is gradually exposed when she ﬁnds her father, Finn, living as a near-recluse in a town called Opportunity. Finn’s next-door neighbour is Lily Pargetter: aged, lonely, haunted by memories and ghosts. Her nephew, Sandy, is a middle-aged man-child, ineﬀectual but harmless. This eccentric cast of characters could easily hold its own against Alexander McCall Smith’s creations; however, Evans sets her protagonists on a predictable and fairly scripted path, resulting in a message-driven narrative.

The novel is too long and overreaches itself in several ways. In its quest to be contemporary and savvy, Evans weaves narrative connections to include a Benedictine monastery, the United Nations, and the atrocities that took place in Kosovo. In order to accommodate the novel’s ambitious agenda, the narrative relentlessly plods toward a predictable conclusion, without pausing to give these topics the expository depth they demand and deserve. There is no dialectic of generational confusion, guilt, accusation, and change; no translating, questioning, or problematising the concepts of identity and society. In fact, there is surprisingly little confrontation and discovery – all complexity vanishes in that ﬁctional town called Opportunity. Evans’s heavy-handed use of that word overburdens it, and asks it to perform as metaphor, device and social-realist signpost, preventing her readers from discovering possible subtexts.

In a novel that ostensibly seeks to explore the complicated ties between parents and children, a potentially interesting relationship between Finn and Moss, two likeable but not fully realised characters, is sidelined by Evans’s quest to spin a complex tale. A book with fewer threads would have made for a stronger yarn.

Susan Gorgioski lives in Australia. She enjoys reading and writing. Her work has been published in Meanjin, Arena, and others.

Susan Gorgioski lives in Australia. She enjoys reading and writing. Her work has been published in Meanjin, Arena, and others.