The Slap by Christos Tsiolkas

In early 2018, Christos Tsiolkas published a long essay as part of a series commissioned by the Sydney branch of PEN, an organisation dedicated to freedom of expression. ‘Tolerance’, which appeared in Tolerance, Prejudice and Fear (2008), is an interesting document, not least for the way it highlights how compelling yet exasperating a writer Tsiolkas can be. Like much of his work, it is fired by passionate political commitment and is roughly but emotively written. The analysis seems to come at you, like a berserker, from every direction at once. Tsiolkas is particularly cavalier with the term ‘liberal’, whose many shades of meaning are badly trampled in the onrush of argument. I suspect that Christopher Hitchens, to take one example, would be none too pleased about being called the L-word.

Yet the essay bludgeons its way toward a basic stance that reflects some of the urgency of Tsiolkas’s fiction. It bristles at the pieties of polite society, the self-satisfaction of supposedly ‘liberal’ attitudes that paper over real cultural differences. There is indeed something mealy-mouthed about elevating ‘tolerance’ – a word that conveys more than a whiff of resentment – to the status of civic virtue. Tsiolkas considers himself a man of the left but is impatient with what he sees as the complacency, prim hypocrisy, and ineffectual nature of his own side of politics. Much of the energy of his writing is generated by the friction between a frustrated idealism of the left, which sets itself against inequality and exploitation and prejudice, and a tough-minded realism that wants to insist upon the regressive impulses that perpetuate these social evils. More than any other contemporary Australian novelist, he has a powerful sense of humankind’s capacity for hatred. His fiction acknowledges its primal allure, its negative validation; his characters often experience a surge of excitement when they allow themselves to think a vicious or bigoted thought. On this point, he is a furious moralist for whom the truths most in need of telling are hard, un- palatable truths. A writer, he argues, has a duty to be ‘blasphemous’ (his emphasis), to adopt ‘a position beyond the bourgeois politeness that taints the liberal’s conception of free speech, and also a position at odds with the redemptionist hope that defines the socialist and feminist ideal of art’.

No one who has read Dead Europe (2005), his most fully realised work and one of the most horripilating novels ever published in this country, could accuse Tsiolkas of being tainted by bourgeois politeness; there is not much chance of him being mistaken for a feminist either. But some of the erratic quality of his work can be attributed to the desire to provoke. In both content and form, his fiction tends to be blunt to the point of brutality. You will search long and hard for a finely turned phrase or even a metaphor in his writing, and he spares the reader no ugly detail. His fiction is thrown down as a challenge and, when it works, it has a remarkable energy: it is angry, intense and genuinely provocative. But when the tension slips, the bluntness can seem puerile and sordid. That the distinction is largely in the eye of the beholder is, to a significant extent, the point. The only option not on the table is indifference.

The Slap is thus notable for being Tsiolkas’s mildest book to date. It is that old-fashioned thing, a panoramic social-realist novel. In his essay on tolerance, Tsiolkas imagines a hypothetical dinner party with a motley assortment of guests from across Australia’s cultural and political spectrum; The Slap begins with a more plausible version of the same concept. The opening chapter describes a barbecue, hosted by Hector and his wife, Aisha. It is attended by people from a diverse range of backgrounds, such as one might well encounter in Melbourne’s multicultural northern suburbs. There are the children of Greek and Indian migrants, an Anglo-Australian couple, a Jewish woman, an Aboriginal Muslim convert, a heterosexual teenage girl, and her homosexual male friend. (Ari, from Tsiolkas’s first novel, Loaded, 1995, also makes a cameo appearance.) The afternoon ends acrimoniously when Hector’s cousin, Harry, slaps the brattish three-year-old child of the Anglo-Australian couple, Rosie and Gary, who react with outrage and threaten to press charges.

The novel’s initial point of conflict is perfectly targeted. There is hardly a more sensitive subject than how people choose to raise their children. Children are at the centre of every moral panic, and the ‘parental anxiety’ gland is forever being massaged by our political leaders. The slap – and indeed The Slap – is a strike at middle-class sensitivities. The novel explores the way that the preciousness and anxiety that surround child rearing is symptomatic of broader cultural tensions. As the consequences of Harry’s action unfold, The Slap inhabits the points of view of eight of the guests and develops into a multi-sided, multicultural, multi-generational portrait of a section of Australian society at the tail-end of the Howard years. Childishness, in the sense of naïveté and selfishness, becomes a motif, and the identity of each of the major adult characters is, in a sense, defined around children. Hector and Aisha, in their early forties, are struggling to be reconciled to their domesticity; Anouk has opted out of child rearing altogether, preferring to pursue her dream of becoming a novelist; the upwardly mobile Harry projects his aspirations onto his only son; and the elderly Manoli, Hector’s father, whose joyless marriage has curdled his private views into a sour misogyny, clings to a traditional sense of family loyalty in the face of the complexities of modern life.

The Slap, a long novel, contains some ragged writing, but its multiple perspectives work together to illuminate the difficulties of the issues it raises, and its length is justified by the breathing space it permits its characters. Tsiolkas has the dramatic sense to know when to step back and allow them to argue among themselves, and there is a great deal of topical interest in a work that features robust exchanges on issues such as public education and women wearing veils.

But there is also an insistent quality to the novel. Rosie and Gary, in particular, embody all the sins of bourgeois morality that Tsiolkas dislikes, and are very harshly treated. Gary, disagreeable and alcoholic, harbours frustrated artistic ambitions that are viewed with scorn; Rosie is self-righteous but fragile. Their indignation at their son’s rough treatment is seen by most of the other characters as an overreaction and serves to alienate them. Most significantly, the novel hammers the point that they are raising a mollycoddled, disrespectful child with an inflated sense of his own entitlement.

Part of the novel’s intention is to direct the reader back to his or her assumptions. One’s response to The Slap is likely to coalesce around the question of whether or not one believes a grown man slapping a three-year-old is appalling, or whether one harbours a sneaking suspicion that it might just do the brat some good. I would incline to the former view (thus my bourgeois morality); the book’s sympathies appear to lean the other way, even though the slapper, Harry, is the novel’s most unpleasant character. There is, occasionally, an unhappy sense that the palpable disapproval of Rosie’s overprotectiveness spills over into an implicit endorsement of an unappealingly Spartan alternative. This is moderated somewhat by the novel’s sympathetic portraits of the teenagers Connie and Richie as they fumble their way through the sexual awkwardness of adolescence. Both of them are on the cusp of entering into genuinely adult relationships, and are portrayed with sensitivity and a respect for their capacity to think for themselves and make their own mistakes. The final chapter is, significantly, given over to Richie as he completes high school and looks to the future with a sense of anticipation and optimism.

That Tsiolkas’s fiction speaks from the political margins and addresses itself to the future invests it with a vaguely prophetic tone. In Dead Europe, this manifests itself in the notion that the injustices of the present will be repaid by the return of the ancient superstitions and religious hatreds of the past. This is given dramatic force by the novel’s appropriation of the conventions of the horror genre and, on another level, the suggestion that the narrative was a mythical journey through hell, with all of Europe transformed into a vast underworld of festering resentment and exploitation. In The Slap, the prophetic note sounds, in a more understated way, in the implication that the presumptuous universalism represented by Rosie’s middle-class values cannot survive. The novel’s multiple perspectives deliberately marginalise her moral certainty, making it merely one of a host of competing views. Her family’s fortunes are in decline. The world of the novel is one in which the most selfish and brutal character, Harry, is also the most materially successful and living in opulent vulgarity in his bayside home.

The Slap is less immediately compelling than Dead Europe, partly because the prospect of a recurrence of murderous anti-Semitism is a lot scarier than demographic drift, and partly because the multiple points of view make for a looser dramatic structure and a less direct work. But it is an engaging and stimulating book: rough, irascible, and contentious. Tsiolkas, I am sure, would not want it any other way. 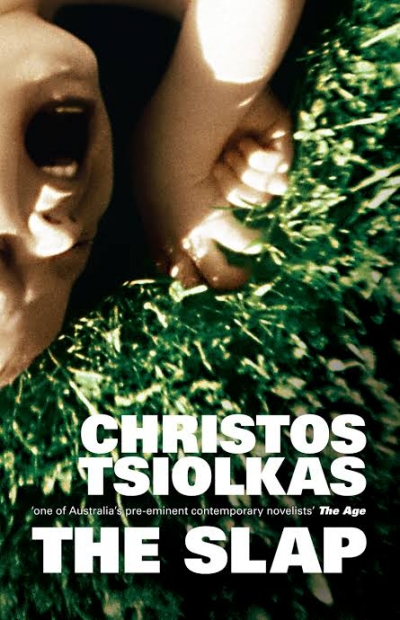